Gods and Demons Wiki
Register
Don't have an account?
Sign In
Advertisement
in: Beings, Demon, Angel,
and 8 more

Abaddon is the fallen cherub that was tempted to fall by Lilith and becoming the Archdemon that rules the Abyss. He was known as the angel that banished Lucifer and his rebel angels after the War in Heaven.

Abaddon is either a biblical term in Hebrew which means "place of destruction" and is a fiery plane in the realm of the dead, Gehenna or In the later teachings of Revelation, a being that personified the abyss, becoming known as the "Angel of the Abyss." The Greek title for Abaddon is "Apollyon" which literally means "The Destroyer". He was also called the King of the Grasshoppers.

He is often associated with the swarms of locusts that sometimes destroy entire crop fields and in the The Greater Key of Solomon was said to be called upon by Moses to cause the great rains during the Ten Plagues of Egypt. Abaddon is the chief of the demons of the seventh hierarchy, the king of the grasshoppers, or demon locusts (described as having the bodies of winged war-horses, the faces of humans, and the poisonous curved tails of scorpions). Even though his pre-demon name was Muriel, even before he fall, some angels still called him Abbadon.

Abaddon is in command of the Sixth House of Jinnestan, Demonic Ruler of the Abyss. Abaddon is also more akin to a force of nature than a living being, as is evident by the fact his name can also refer to a portion of Hell where sinners are said to be surrounded by snow and fire. He is often associated with the swarms of locusts that sometimes destroy entire crop fields and in the The Greater Key of Solomon was said to be called upon by Moses to cause the great rains during the Ten Plagues of Egypt.

In most texts that speak of him, Abaddon is among the most feared of supernatural beings; having both angels, demons and corporeal beings fearing his very name alone. Even a demon as powerful as Satan openly admitted that he wishes to avoid a confrontation with Abaddon, implying that Abaddon is maybe even more dangerous than the King of Hell himself.

He is often depicted as a large, human-sized locust and rules and leads a swarm of locusts and other insects that carry infectious diseases as a king.

Abbadon is an enigma. At times, he is an angel of judgment, not of Satan but of God, destroying at God's bidding. Both Heaven and Hell claim him as an ally, other times as an enemy. It is clear that he is the angel who will command the monstrous horde from the Abyss that will rampage over the earth in the tribulation period as Judgment approaches. What is not clear is whose orders he will be following at what time. Even after he fell, Abaddon still is an enigma in who he truly follows and had sometimes went against both to fill his own needs. So even now that he is a demon, he has the strange quirk about him that allows him to regain his angelic form.

Abaddon is sometimes referred or foreshadowed as Death, as they both are neutral entity of the two opposing forces. He is also considered as both angel and demon with neutral and at times lawful agent of both Heaven and Hell. It is unknown where does allegiance lie, but he is often seen as a lawful agent of God who will abide to His will to fulfill his long destiny and duty and other times a demonic instrument of destruction sent by Ayin.

Abaddon was originally a biblical term in Hebrew which means "place of destruction" and is a fiery plain in the realm of the dead, Gehenna. It wasn't until the later teachings of Revelation that Abaddon had became an entity by himself. Abaton was the Greek word for Pit, which the Hebrews changed to Abaddon, which later became synonymous with the Christian hell.

While in many circles, he is considered to be associated with Satan, even going as far as to claim that Abaddon is another name for Satan, he is actually a righteous figure, and was charged with casting Satan down into the abyss and sealing him within. Abaddon has also been identified as the "angel" of death and destruction, demon of the abyss, and chief of demons of the underworld hierarchy, where he is equated with Samael or Satan.

Cornelius Agrippa was the one that equated Abaddon with Apollyon, and positioned him as the monarch in the lower shadow of the sphere of the planet Venus, which is the Sephirah of Netzach on the Kabbalistic Tree:

The Thanksgiving Hymns and in the Dead Sea Scrolls tell of "the Sheol of Abaddon" and of the "torrents of Belial [that] burst into Abaddon". The Biblical Antiquities of Philo' mentions Abaddon as a place (Sheol, Hell), not as a spirit or demon.

The Hebrew word abaddon means "place of destruction" Job 26:8 and Psalms 88:11. The role of Apollyon in biblical references is ambiguous, sometimes being described as a good jinn who serves God, and sometimes also being described as a demon who succumbed to evil. The word Apollyon and its variations are sometimes used to mean a place perhaps Hell itself (in the Old Testament the name Abaddon is used for the place of the dead). The word Abbadon is also used for Hell in rabbinical literature. Abaddon has also been considered the Hebrew name for the Greek god Apollyon.

According to the Brown Driver Briggs lexicon, the Hebrew abaddon (Hebrew: אבדון; avadon) is an intensive form of the Semitic root and verb stem abad (אָבַד) "perish" (transitive "destroy"), which occurs 184 times in the Hebrew Bible. The Greek term "the Destroyer" (Apollyon, Ἀπολλύων) is the active participle of apollumi (ἀπόλλυμι) "to destroy". The term is not used as a name in classical Greek texts.

Abaddon is given particularly important roles in two sources, a homily entitled The Enthronement of Abbaton by pseudo-Timothy of Alexandria, and the Apocalypse of Bartholomew.

In the homily by Timothy, Abbaton was first named Muriel, and had been given the task by God of collecting the earth which would be used in the creation of Adam. Upon completion of this task, the jinn was then named to be guardian. Everyone, including the angels, jinn, and corporeal entities, felt fear of him. Abbaton engaged in prayer and ultimately obtained the promise that any men who venerated him during their lifetime stood the chance of being saved. Abbaton is also said to have a prominent role in the Last Judgement, as the one who will take the souls to the Valley of Josaphat. He is described in the Apocalypse of Bartholomew as being present in the Tomb of Jesus at the moment of his resurrection. 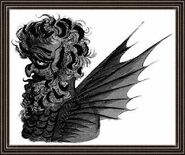 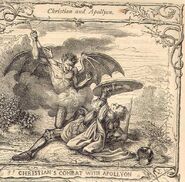 Christian's Combat With Apollyon (Art from The Pilgrim's Progress) 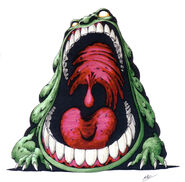 Abaddon as the Abyss' (Art from Shin Megami Tensei) 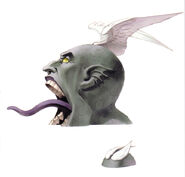