Gods and Demons Wiki
Register
Don't have an account?
Sign In
Advertisement
in: Beings, Aeon, Gnosticism,
and 14 more

Yaldabaoth, Satanael (both half)

Abraxas is an Aeon, a divine being residing in the Pleroma from Gnosticism who is similar to a Deity but without the need of faith to function. In a great majority of instances the name Abraxas is associated with a singular composite figure, having a Chimera-like appearance somewhat resembling a basilisk or the Greek primordial god Chronos.

Abraxas had under his command 365 gods, to whom they attributed 365 virtues, one for each day.

Abraxas is a fat-bellied character with the head of a lion or a cock, sometimes crowned, with a dragon's tail, and serpents instead of legs. He also carries a whip in his hand.

Abraxas was the Persian sun god, and in Syria he was a form of Iao (aspect or name for Yahveh, Yahweh, or Jehovah). It is said that the name was created to replace the unmentionable name of the Supreme Being.

Abraxas is known from the Gnostic writings of Simon Magus, father of the Gnostics and Basilides of Egypt, an early 2nd-century Gnostic teacher. The Gnostics, a sect of the 2nd century, claimed Abraxas as their supreme god, and said that Jesus Christ was only a phantom sent to earth by him. They believed that his name contained great mysteries, as it was composed of the seven Greek letters that formed the number 365, which is also number of days in a year.

It is affirmed that there is a supreme Deity, by name Abraxas, by whom was created Mind, which in Greek he calls Nous; that thence sprang the Word; that of Him issued Providence, Virtue, and Wisdom; that out of these subsequently were made Principalities, Powers, and Angels; that there ensued infinite issues and processions of angels; that by these angels 365 heavens were formed, and the world, in honour of Abraxas, whose name, if computed, has in itself this number.

Now, among the last of the angels, those who made this world, he places the God of the Jews latest, that is, the God of the Law and of the Prophets, whom he denies to be a God, but affirms to be an angel. To him, he says, was allotted the seed of Abraham, and accordingly he it was who transferred the sons of Israel from the land of Egypt into the land of Canaan; affirming him to be turbulent above the other angels, and accordingly given to the frequent arousing of seditions and wars, yes, and the shedding of human blood.

Christ, moreover, he affirms to have been sent, not by this maker of the world, but by the above-named Abraxas; and to have come in a phantasm, and been destitute of the substance of flesh: that it was not He who suffered among the Jews, but that Simon was crucified in His stead: whence, again, there must be no believing on him who was crucified, lest one confess to having believed on Simon. Martyrdoms, he says, are not to be endured. The resurrection of the flesh he strenuously impugns, affirming that salvation has not been promised to bodies.

According to E. A. Wallis Budge, "as a Pantheus, i.e. All-God, he appears on the amulets with the head of a cock (Phœbus) or of a lion (Ra or Mithras), the body of a man, and his legs are serpents which terminate in scorpions, types of the Agathodaimon. In his right hand he grasps a club, or a flail, and in his left is a round or oval shield." This form was also referred to as the Anguipede. Budge surmised that Abraxas was "a form of the Adam Kadmon of the Kabbalists and the Primal Man whom God made in His own image".

Abraxas represented the 365 Aeons or emanations from the First Cause, and as a Pantheus. Some theorize that he is an Egyptian god, but there seems to be no evidence of this.

The initial spelling of the word as seen on stones was Abraxas (Αβρασαξ). The spelling seen today probably originates in the confusion made between the Greek letters Sigma and Xi in the Latin transliteration.

The word is found in Gnostic texts such as the Coptic Gospel of the Egyptians and the Greek Magical Papyri. It was also engraved on some gems hence called Abraxas Stones, which were used as amulets. As it was initially spelled 'Abrasax' (Αβρασαξ), the form 'Abraxas' found today probably originated in some confusion between the Greek letters Sigma and Xi in the Latin transliteration. Abrasax may also be related to Abracadabra, although other explanations exist.

There are several similarities and differences between these engravings in reports on the teachings of Basilides, ancient Gnostic texts, the great Greco-Roman magical traditions, and modern magical and esoteric writings. Opinions abound on Abraxas, who in recent centuries was understood to be an Egyptian god and a devil. Swiss psychologist Jung wrote a short Gnostic treatise in 1916 called the Seven Sermons to the Dead, which had Abraxas as a god above the Christian God and the Devil, which would combine all opposites into a single Being. 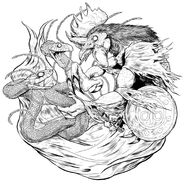 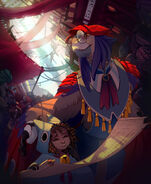 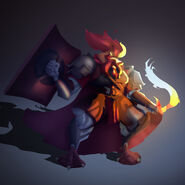