Gods and Demons Wiki
Register
Don't have an account?
Sign In
Advertisement
in: Location, Realm, Mythology,
and 3 more

The Abyss is a megaversal prison meant for beings beyond compression like the Primordials and Arcuthas. It is where the devil, Satan, will be imprisoned for a thousand years after being defeated by the Man Riding a White Horse in the Apocalypse.

The Abyss is an unfathomably deep or boundless space. It is rumored that if one loses one's life within the Abyss, one's soul will descend to the bottom and live as a form of spirit of the Abyss. The unreachable depths of the pit makes the Gods believe that it transcends all life itself. It is also rumored that the Abyss predates God himself, which is unlikely, but is still a possibility. It is said to inhabit the most dangerous of beings.

In the Bible, the abyss is an unfathomably deep or boundless place. The term comes from the Greek ἄβυσσος, meaning bottomless, unfathomable, boundless. It is used as both an adjective and a noun. It appears in the Septuagint, the earliest Greek translation of the Hebrew Bible, and in the New Testament. It translates the Hebrew words tehom (תהום‎, deep), tsulah (צולה‎, sea-deep, deep flood) and rachabh (רחב‎, spacious place).

In the original sense of the Hebrew tehom, the abyss was the primordial waters or chaos out of which the ordered world was created (Genesis 1:2). The term could also refer literally to the depths of the sea, the deep source of a spring or the interior of the earth.

In a later extended sense in intertestamental Jewish literature, the abyss was the underworld, either the abode of the dead (sheol) or eventually the realm of the rebellious spirits (Hell). In the latter sense, specifically, the abyss was often seen as a prison for demons. This usage was picked up in the New Testament. Jesus sent the Gadarene swine into the abyss (Luke 8:31) and the beast from the sea (Revelation 13:1) will rise out of the abyss (Revelation 11:7). The locusts—human-animal hybrids—ascend out of the abyss to torment those who do not have the seal of God on their foreheads (Revelation 9:1-11). Paul uses the term in Romans 10:7 when quoting Psalm 71:20, referring to the abode of the dead.

In Psalm 42:7, "deep calls to deep" (referring to the waters), or in Latin abyssus abyssum invocat, developing the theme of the longing of the soul for God. Cassiodorus relates this passage to the mutual witness of the two Testaments, the Old Testament foretelling the New, and the New Testament fulfilling the Old.

In Revelation 9:11, Abaddon is called "the angel of the abyss".

On the Origin of the World, a text used in Gnosticism, states that during the end of the world, the archons will be cast into the abyss by Sophia for their injustice. There they will fight each other until only the chief archon remains and turns against himself.

The Prison of Satan (Art by Aynnhan) 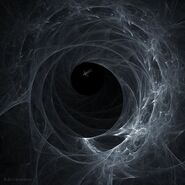