Gods and Demons Wiki
Register
Don't have an account?
Sign In
Advertisement
in: Beings, Abrahamic, Mythology,
and 10 more

Garden of Eden, Humanity (Ancestor of the majority), Enochians (Descendants)

Adam, also known as First Man and Adam Kadmon, was apart of one of the first human civilizations that was created by God. Adam is the earthly personification of God, personifying his beauty, perfection and love, created from clay but with a mighty soul within him, a piece of God himself.

Adam although known as the father of mankind, this was shown to be a result of the belief of the Hebrew inhabitants. In fact, Adam was one of the first human beings to develop the ego, the "I Am" that results from the soul of human beings, which was breathed into the nostrils of early hominids by God. Adam however, was a human different from others, he was a Messiah, probably the first messiah and prophet to ever walk the earth, a special human created by God to guide humans to the path of light.

He was created on the Sixth Day of Creation in the image and likeness of God, androgynous, embodying all male and female aspects of humanity, some legends say that his androgyny represented the masculinity and femininity of God. Considered more than just a human being, but a deity, being 100% man and 100% god, similar to the Last Adam, with a power "little less than the angels". After the Deluge came, the descendants of Adam, Noah and his sons survived the Flood waters, which in turn caused the next generations to come directly from Adam's seed, which made some think that he was the first human to exist.

Adam's original appearance was that of an androgynous being, his body was said to be of supernatural beauty, being practically an earthly version of God in creation. His beauty embodied both male and female beauty, her face was similar to a girl with masculine features, being described as "cute" for angels. Their beauty incorporated both male and female beauty, they had brown hair that went from their head to their legs, their body was curvilinear, but thin and with some muscles, besides possessing male and female sexual characteristics. Heavenly Adam didn't wear normal clothes, but they dressed in light, clothes made of pure light, making them look like not a human, not an angel, but rather the image and likeness of God.

After God split them in two to create Eve, Adam lost his feminine characteristics, but remained a handsome dark-skinned man with brown hair and blue eyes, possessing stiff muscles that appear to be made of metal fiber. According to some angels, if Adam had lived today, he would be considered the most beautiful man on earth. He and Eve apparently had an angel halo on their heads, which was lost when they fell. Adam was over five meters tall.

Adam was, at best, a "miniature" version of God, Adam was innocent, just and kind, he was pure and loving. Adam was said to define the very Essence of a "Man" and is described as being a "Man among Men". However, after his fall, Adam lost most of his divine qualities, becoming a normal person like any other, a sinner. Despite this, he still maintains his sense of righteousness that he received from God and loves human beings, as they are all "his children". Adam's love for his children was strong enough that, even in a battle for his life, he only thought of protecting humanity from anyone who'd try and do them harm.

Adam was created in the image and likeness of God, in other words he is (in a sense) like God Himself in an earthly version. Adam was created with a spark of divine light within himself from the creator himself, giving him and his descendants the ability to manipulate reality and creation even if unconsciously.

Adam was created by God with the expressed purpose of being one of the first humans. The Lord had created many women to be his wife, including Naamah, Eisheth Zenunim, and Agrat Bat Mahlat, but none of them were interested in him. The only woman who was interested in Adam was Lilith, who he was eventually able to get into a relationship with. However, after Adam attempted to come onto her and she didn't reciprocate, their relationship was broken up.

For a short time Adam had lived alone. He lived on the land with no childhood, no parents, no family and no friends. Perhaps Adam's loneliness moved God to quickly present him with a companion, Eve which came from his rib.

Before Adam knew of Eve, God had given him the Garden of Eden. It was his to enjoy, but he also had the full responsibility of taking care of it. Adam knew that one tree was off limits, the Tree of Knowledge. Adam was then tasked with naming every single other possible animal that will be in the realm, down to the last organism.

After Adam was presented with Eve, he would have taught her the rules of the garden. Even though she knew it was forbidden to eat the fruit from the tree in the middle of the garden, when Samael (under Lucifer and Lilith's orders), tempted her, Eve was deceived.

When she offered the fruit to Adam, the fate of the world was on his shoulders. As they ate the fruit in that one act of rebellion, man's independence and disobedience separated him from God. God then questions Adam and Eve initiating a dialogue. God calls out to Adam using a rhetorical question that is designed to prompt him to consider his wrongdoing. This is followed by two more rhetorical questions designed to show awareness of a defiance of God's command. Adam then points to Eve as the real offender, then accuses God for the tragedy.

After a series of blaming occurs, God initiates judgement on all culprits involved. A judgement oracle and the nature of the crime is first laid upon the serpent, Eve, and finally Adam. In Adam's punishment, God curses the ground from which he came, and then receives a death oracle. After the expulsion, Adam worked hard to acquire food for the first time. He bore several sons and daughters with Eve, whom would later populate the planet. Among the three most well known of their children were Cain, Abel, and Seth.

According to legends, Adam could not bear the death of his sons Cain and Abel, so he blamed Eve and left her lap. Others say that after Abel's death, Eve became angry with Adam and separated from him for 130 years. Anyway, after the two split, Adam met a succubus known as Naamah, and the two started dating for dozens of years, which made Adam also one of the progenitors of several demons, as he had several children with Naamah. After one hundred years, Adam and Naamah separated for reasons only they know, and later he and Eve met and decided to try to start over again. From Adam and Eve's new relation, the father of mankind, Seth, was born.

According to Genesis, Adam died at the age of 930 making him the third longest living person next to Noah and Methuselah. With such numbers, calculations such as those of Archbishop Ussher would suggest that Adam would have died only about 127 years before the birth of Noah, nine generations after Adam. In other words, Adam's lifespan would have overlapped with that of Noah's father Lamech by at least fifty years. However, there are rumors circulating the he still lives and walks among his children, bearing the curse of immortality from having to devour the Forbidden Fruit.

Urantia Book says; 76:5.5 Adam's life lasted 530 years; he died of what might be termed old age. His physical mechanism simply wore out; the process of disintegration gradually gained the upper hand over the process of repair, and the inevitable end came. It had been nineteen years since Eve had died of a weakened heart, that is, at the age of 511. Both were buried in the center of the temple of divine service that had been built according to their plans shortly after the walls of the colony were completed. From this originated the practice of burying notably pious men and women under the floor of the temples of worship. 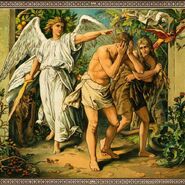 Adam and Eve in Heaven (Art by Erisiar)