Gods and Demons Wiki
Register
Don't have an account?
Sign In
Advertisement
in: Beings, Demon, Hell,
and 3 more

Adramelech, formerly known as Adrael, is the Grand Chancellor of Hell and is a powerful demon in Judeo-Christian traditions.

Adramelech is a fallen angel turned demon that was once vanquished by the True Archangels Uriel and Raphael during the War in Heaven. He also was falsely worshipped as a sun along with his sibling Anamelech who was worshipped as a moon god. The center of their worship was the town of Sepharvaim and was brought by the Sepharvite colonists into Samaria. Both feared for his power and mocked for his clothing tastes out of step with those of the other superior demons, he is of a rather capricious and vain character, but becomes very small in the presence of Satan.

After his fall from Heaven, Adramelech became the president of the senate of demons. He is also the Grand Chancellor of Hell within the Stygian Council of Pandemonium along with acting as the supervisor of Satan and Lucifer's wardrobe, as well as the eighth of the ten evil Sephiroth. He is also the chancellor of the Order of the Fly, founded by Beelzebub and president of the high council of devils.

Adramelech is generally depicted with a human torso and head, and the rest of his body having the appearance of a mule or peacock. He often appeared in animal forms such as that of a peacock, mule, horse, or lion.

Adramelech can levitate, shoot ice lightnings, project light rays with his peacock tail, and even teleport himself in clouds of smoke.

Adramelech was an angel that resided in Heaven until he joined Lucifer's cause to usurp God. During the rebellion, he fought and was vanquished by the true archangels Uriel and Raphael in the War in Heaven. Given his role as the supervisor for Satan's wardrobe it is likely that he had a similar job description within Hell where he tailored and designed the outfits for the angels.

After his fall from Heaven and the establishment of the infernal kingdom within Hell, Adramelech was was appointed as the chancellor of the Order of the Fly, founded by Beelzebub and president of the high council of devils.

He’s considered the Grand Chancellor of the infernal empire of Hell. According to the Dictionnaire Infernal, he became the President of Devils' general council (the Senate of the Demons), as well as the eighth of the ten evil demons of the Sefirot of the Tree of Life. He works under the command of Samael.

A poet's description of Adramelech can be found in Robert Silverberg's short story "Basileus." Adramelech is described as "The enemy of God, greater in ambition, guile and mischief than Satan. A fiend more curst — a deeper hypocrite."

Like other pagan gods, Adramelech is considered a demon in Judeo-Christian tradition. Adramelech has been linked to the jinni Asmadai, mentioned in Milton’s Paradise Lost as one of the potent thrones. Milton also referred to Adramelech as an Assyrian idol and as a jinni defeated by Uriel and Raphael. In addition, he appears in The History of Magic, pictured as a horse, and has been equated with the Babylonian god Anu, and with the Ammonite Moloch.

The name appears in Josephus’s Antiquities of the Jews (book 16, chapter 8) as Andromachos and in Greek sources as Adramelos and Ardumuzan. The name is also used for a son of Sennacherib in 2 Kings (19:37), who with Sharezer, his brother, murdered his father in the temple of the god Nisroch after they learned their father planned to sacrifice them to the god.

Adrammelech was an ancient Semitic god mentioned briefly by name in the Book of Kings, where he is described as a god of "Sepharvaim". Sepharvaim is commonly, but not certainly, identified with the twin cities of Sippar Yahrurum and Sippar Amnanum on the banks of the Euphrates, north of Babylon, , where children was burned as a sacrificial offering to him. The name probably translates to "Magnificent king."

An unrelated person with the name of Adrammelech is described in Hebrew writings as a son and murderer of Sennacherib, king of Assyria. He was known in the Akkadian language as Arda-Mulissu, and was the rebellious son of Sennacherib. 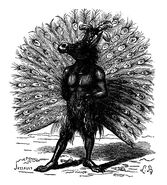 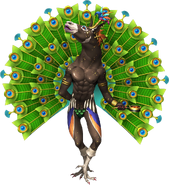