Gods and Demons Wiki
Register
Don't have an account?
Sign In
Advertisement
in: Races, Heaven, Abrahamic,
and 5 more

Eons, The Incorruptibles, The Perfects, Aions, Lords of Chaos

Emanated from God and Barbelo

The Aeons are the various emanations of God and Barbelo, similar to primordials, they are abstractions, personifications of concepts.

The Aeons are ineffable beings who were born from the constant mixture between the Ineffable Goddess and the Heavenly Father; as the two were beings without barriers to each other and without limits, when the two met they were like two galaxies when they merge, the two danced, twirled and blended into the into each other, from this ineffable union, the Perfects emerged.

Aeons are different from angels, though similar. Aeons are abstractions, concepts, living forces far beyond human comprehension. Sophia, for example, is the very personification of wisdom and also of faith, while her Mother, Barbelo, is much greater than that, she is ineffability, motherhood and silence. Aeons are always described as absurdly powerful beings, transcending the entire physical universe and the ignorant and blind, Yaldabaoth. They are called perfect and incorruptible, showing their holiness.

The Aeons are the various emanations of God. Beginning with the hermaphroditic Aeon Barbelo, the first emanated being, various interactions with God occur which result in the emanation of successive pairs of Aeons, often in male–female pairings called syzygies. The numbers of these pairings varied from text to text, though some identify their number as being thirty. The Aeons as a totality constitute the pleroma, the "region of light". The lowest regions of the pleroma are closest to the darkness; that is, the physical world. wo of the most commonly paired Aeons were Christ and Sophia; the latter refers to Christ as her "consort".

The source of all being is an Aeon, in which an inner being dwells, known as Ennoea, Charis, or Sige. The split perfect being conceives the second Aeon, Nous, within itself. Complex hierarchies of Aeons are thus produced, sometimes to the number of thirty. These Aeons belong to a purely ideal, noumenal, intelligible, or supersensible world; they are immaterial, they are hypostatic ideas. Together with the source from which they emanate, they form Pleroma. The lowest regions of Pleroma are closest to darkness—that is, the physical world.

The transition from immaterial to material, from noumenal to sensible, is created by a flaw, passion, or sin in an Aeon. According to Basilides, it is a flaw in the last sonship; according to others the sin of the Great Archon, or Aeon-Creator, of the Universe; according to others it is the passion of the female Aeon Sophia, who emanates without her partner Aeon, resulting in the Demiurge, a creature that should never have been. This creature does not belong to Pleroma, and the One emanates two savior Aeons, Christ and the Holy Spirit, to save humanity from the Demiurge. Christ then took a human form, to teach humanity how to achieve Gnosis. The ultimate end of all Gnosis is metanoia, or repentance—undoing the sin of material existence and returning to Pleroma.

Beings who are not real Aeons, but who are considered to be Aeons. 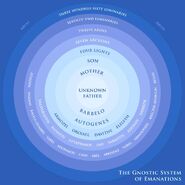