Gods and Demons Wiki
Register
Don't have an account?
Sign In
Advertisement
in: Beings, Deity, Primordial,
and 8 more

Aether is the Primordial Deity of Light and the Upper Sky and is the brother/husband of Hemera. He is one of the oldest children born from Nyx and Erebus.

He is the personification of the "upper sky", and embodies the pure upper air that the gods breathe, as opposed to the normal air breathed by mortals (mainly Humans). Aether is one of the only Greek deities who is known to change sex constantly.

He was also the god of the sky, which the ancient Greeks considered to be “blue ether” that represented the heavens. Aether's mists were able to fill the space between the transparent mists on the ground and the solid dome that made up the sky. Air on the earth was governed by Zeus and the Anemoi, but all of the air above this was Aether's domain.

Aether also served as a protector, to separate humans and earthly beings from Tartarus, the god of the lowest and deepest parts of Hades, the Underworld. With his presence, he was able to keep both this darkness and the lord of it away from mortals and their world. Aether also had powers to control the sun, the moon, the stars, and the clouds, as well. Aether and the other primordial gods were loved and honored by ancient humankind, but there is no current knowledge or proof that there ever were any temples dedicated to their service or rituals done in their honor.

Unlike his younger siblings including Thanatos and Hypnos, Aether and his sister Hemera are Primordials Deities as they were born before Creation while the rest were born after as second generation Primordials.

Aether as a Primordial can easily defeat every Olympian with no issue including Zeus. He also far surpass his younger brothers Thanatos and Hypnos.

The ancient Greeks believed that the sky was a dome that encased the entirety of the Earth. At night, Nyx was drawing her veil across this dome to obscure the light. This also blocked Aether's domain from the reach of the ancient Greeks.

In the morning, Hemera would disperse the mists of the night to reveal Aether's blue ether again. Hemera was both Aether's sister and his wife. In the ancient Greek tradition, day and night were separate from the sun and the moon. Gods of the sun were regarded differently from gods of the day.

Aether is one of the very first gods of the Ancient Greek Mythology. These first gods are called “primordial gods,” because these first deities came from an empty space. deities were born, including the parents of Aether: the darkness and the night, the god Erebus and the goddess Nyx. According to mythology, Aether also has a sister, called Hemera, who rules the time of the earthly days and light. He is still being honored and used today in the Greek language: the word “Imera” in Greek means “day”.

Aether was one of three primordial air gods. He represented all of the air at the upper reaches of the Earth's atmosphere. The air directly below him, dispersed over the Earth, was the domain of Khaos. The final air was governed by Erebus, and it was considered to be the mists that existed in the underworld.

Aether was thought to envelop the moon, sun, stars, clouds, and peaks of the mountains. All of these areas were Aether's domain, while other parts of the Earth fell to the Gods. Aether did have a female counterpart, referred to as Aethra or Aithre in ancient Greek myths. She was considered to be the mother of the moon and sun as well as the Titaness who governed clear skies. Aether's most notable offspring were Thalassa, the primordial ocean goddess, others are the rain cloud nymphs or the Nephelae. They were the result of his coupling with wife and sister Hemera. The Primordial God Ouranos was said to be born between Aether and Gaia.

Yet, Aether has not been forgotten. Throughout the Middle Ages, scientists believed that a fifth element called “aether” exists, which has gotten its name from the god Aether. The knowledge and understanding that they had of four known elements, -the earth , the air, the fire, and the water,-did not explain all their findings of the Universe, and they thought that there is a mystical, fifth force that holds everything together and fills the space between all things that exist.

Aristophanes states that Aether was the son of Erebus. However, Damascius says that Aether, Erebus and Khaos were siblings, and the offspring of Chronos (Father Time). According to Epiphanius, the world began as a cosmic egg, encircled by Time and Inevitability (most likely Chronos and Ananke) in serpent fashion. Together they constricted the egg, squeezing its matter with great force, until the world divided into two hemispheres. After that, the atoms sorted themselves out.

The lighter and finer ones floated above and became the Bright Air (Aether and/or Ouranos) and the rarefied Wind (Khaos), while the heavier and dirtier atoms sank and became the Earth (Gaia) and the Ocean (Pontos and/or Oceanus) 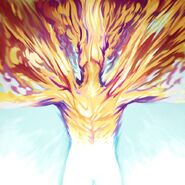