Gods and Demons Wiki
Register
Don't have an account?
Sign In
Advertisement
in: Beings, Demon, Mythology,
and 10 more

Ahriman is a desert spirit and Deity of Evil in Zoroastrianism. As such, he is not immortal, and eventually his reign of terror will be conquered by the forces of good.

He is the avatar of Angra Mainyu, comparable to the Christian concept of the Devil, he's the antithesis of the god Ormazd, the Primordial Deity of Good of the Zoroastrian pantheon.

Often called Druj ("the Lie"), Ahriman was the force behind anger, greed, envy, and other negative and harmful emotions. He also brought chaos, death, disease, great disorder, confusion and other ills into the world. Ahriman had once tried to maim the prophet Zarathustra but failed.

Ahriman was created by Angra Mainyu after the death of Spenta Mainyu as an avatar to both spread evil and to try to resurrect the Dragon.

Ahriman had a son named Zahhak, whom he trained to be evil. He told Zahhak to kill his own father. He disguised himself, however, and Zahhak killed someone he thought was his father. Ahriman, again in disguise, became chief of the palace. Zahhak was so impressed with him that he offered to reward him. Ahriman asked only to kiss his shoulders. When he did so, Serpents sprang from the spots. Every time Zahhak cut them off, they grew back. Ahriman entered in another disguise, as a doctor, and told Zahhak that he had to feed the serpents human brains every day. Zahhak complied and became Ahriman’s pride. The son ruled for a thousand years and finally was destroyed.

Ahriman is identified with Iblis, the devil in Islamic mythology. In some works Ahriman, rather than the snake of biblical lore, is pictured as an old man offering Adam and Eve the fatal fruit. One early Persian sculpture portrays Ahura Mazda riding on horseback trampling on Ahriman’s snake-covered head. 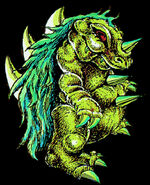