Alastair, Head Torturer of Hell, Great Executioner of Hell, Evil Genius of the Household, Hell's Grand Torturer, Picasso with a Razor, The Executioner, Lord of the Malebranche, Baron of Hell

Alastor is a high-ranking archdemon, and the chief executioner to the monarch of Hell.

Alastor's origins are mostly unknown though it is rumored that he was once a Destroyer Angel that was cast into the pit for his heinous deeds similar to Merihem. Alastor would see torture as an art and a privilege and that sinners should experience pain in the same manner as their own sins are being committed.

One of his epithets is the "Evil Genius of the Household" meaning that Alastor is the demon that conducts the most heinous, depraved, and unbearably cruel tortures in the pits of Hell. Alastor is likened to Nemesis and the destroying angel and is known as The Executioner.

He is exceptionally cruel. Almost all of the demons that roam Hell fear Alastor greatly, almost as much as they fear the Lords of Hell themselves. It is because of this that he was handpicked by Satan himself, due to being impressed by his skills, as the Grand Torturer of Hell. Alastor has even gathered and formed his own group known as the Malebranche; a group of demons comprised of twelve elite fiends that share Alastor's taste in sadistic torment.

Out of all the demons in the infernal Pit, Alastor is arguably the most cruel devil of all, even for a demon, especially in his sadism. His sadism somewhat rivaling the king of Hell himself, Satan. The more pain he could deliver the happier he was, but not just physical pain; he was also effective in mental torture and stress. He viewed torture as an exquisite art and enjoyed being patient and relishing the moments where he tortured his victims.

While torturing his victims, Alastor will sometimes talk to his victims in a calm, polite manner as they scream in pain.

In Waite’s presentation of the Grand Grimoire from his 1910 Book of Black Magic and Pacts, Alastor is described as Hell’s Commissioner of Public Works. He is also portrayed as an infernal judge. These attributions tie back to the work of Charles Berbiguier, a self-styled demonologist from the early nineteenth century. 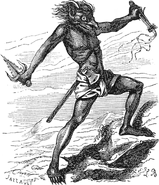 An Illustration of Alastor (Art from Dictionnaire Infernal)