Amaterasu-Ōmikami, simply known as Amaterasu, is the Shinto sun goddess and the current ruler of the High Plane of Heaven. She was treated as the most sacred of all Shinto deities and is said to be a direct ancestor of the Japanese Imperial dynasty.

Amaterasu is the Japanese sun goddess who rules over the High Plain of Heaven. Her name means "(that which) illuminates Heaven." Amaterasu is the daughter of Izanami and Izanagi whom the latter chose her to be the new ruler of the sky. When her father Izanagi escaped from his visit to Yomi, he had to perform a cleansing ritual in the river Woto and it was then, from the god’s left eye, that Amaterasu was born. She is also the sister of Susanoo the storm god and the Tsukuyomi the moon god. Amaterasu constantly quarreled with her mischievous younger brother Susanoo and finally having enough, Izanagi temporary exiled him from heaven.

She is also the sister of Susanoo the storm god and the Tsukuyomi the moon god. Amaterasu constantly quarreled with her mischievous younger brother Susanoo and finally having enough, Izanagi temporary exiled him from heaven. She became the ruler of the sun and the heavens along with her brother, Tsukuyomi, the Shinto god of the moon and ruler of the night. As the primary goddess of Shintoism, Amaterasu is still worshiped in Japan. Her shrine is at Ise.

The most famous myth involving her took place when her brother Susanoo attacked her temple in a drunken rage and killed several of her priestesses. Distressed by this, Amaterasu fled into a cave and darkness fell on the world.

In her human form, Amaterasu appears as a beautiful fit young woman around 24 years old, with long white hair that hangs down to her waist and large breasts. She wears the standard clothes of a miko, a Japanese priestess. Its three measurements are [B89-W85-H86] and its height is 1.60 meters. Sometimes, when in battle, she can summon two fox ears on her head and summon nine fox tails, though in close combat this hinders her. She can transform into a mighty giant white fox with nine tails, with her size being close to 50 meters tall.

In her goddess form, she appears slightly different, only having a slimmer figure and red eyes to match her white hair. She also wears about 10 fox tails and appears wearing a white kimono with some red patches. In its true form, it appears as a small star about 50 meters in diameter that releases such powerful heat that it melts even the metal itself and boils lakes.

Being the personification of the Sun, Amaterasu has her powers related to light. However, she also has powers related to stars or related things, such as gravity, due to being the personification of the sun, a star. Despite being an excellent light user, she admits that her luminous abilities are just "child-play" when compared to the ability of angels, who are made of God's own light.

Izanagi then appoints Amaterasu to rule the sun and Takamagahara (the "Plain of High Heaven"), while her brothers Tsukuyomi rules the moon and the night, and Susanoo rules the seas and the land.

Separation of Sun and Moon

Originally, Amaterasu shared the sky with Tsukuyomi, her husband and brother until, out of disgust, he killed the goddess of food, Ukemochi, when she pulled "food from her rectum, nose, and mouth". This killing upset Amaterasu causing her to label Tsukuyomi an evil god and split away from him; separating night from day.

When he was to leave Heaven to Yomi because Izanagi ordered him so, he went to say goodbye to his sister. Amaterasu, suspicious, proposed him a challenge: each of them was to turn an object of the other's into people. Amaterasu created three women from Susanoo's sword while he created five men from her necklace.

When Amaterasu said the men were hers because they were born of her necklace, Susanoo destroyed her rice fields, threw a dead flayed horse into her loom, and killed one of her assistants in anger. For this, Amaterasu went to hide inside Ama-no-Iwato, the "heavenly rock cave", so the Sun was hidden and the world became dark for a long time. The Oni and demons came out to the dark world, and the gods could not make Amaterasu come out of the cave.

Amaterasu is when she blocked herself in a cave following an argument with Susanoo when he surprised the goddess with a monstrous flayed horse when she was quietly weaving in her palace with her younger sister Waka-hiru-me.

As a consequence of Amaterasu’s disappearance the world was cast in total darkness and evil spirits ran riot over the earth. The gods tried all manner of ways to persuade the peeved goddess to leave the cave. On the advice of Omohi-Kane, roosters were set outside the cave in the hope their crows would make the goddess think that dawn had come.

The gods also placed a large sakaki tree (Cleyera japonica) outside the cave and decorated it with sparkling jewels (magatama), fine white clothes and a mirror at its center. In addition, Ame-no-Uzume, the goddess of mirth and joy, took a big bucket, turned it upside down near the cave entrance, and began a dance on it. She danced so wildly on a bucket in a strip-tease routine in front of the other Kami. This thought this was so funny that they laughed happily and the other gods’ uproarious laughter finally excited the curiosity of Amaterasu.

Amaterasu heard them, and looked out to see why the gods were laughing. Opening the blocked cave just enough to see what was going on and whilst distracted by seeing her stunning reflection (or the enthusiastically naked dawn goddess) in the mirror that Ame-no-Uzume had put on a tree, the strong god Ame-no-Tajikara-Wo pulled the goddess out of the cave and then closed the cave behind her, so she could not go back in. Another god tied a magic rope across the entrance.

Tuto-Tamu then held behind the goddess a pole of plaited straw and emphatically stated that the goddess could hide no longer and the world was once more bathed in her radiant sunlight.

After returning to the Heavens, Susanoo was punished by Izanagi by banishing him to Earth for his deeds.

Later she sent her grandson Ninigi-no-Mikoto to pacify Japan: his great-grandson became the first emperor, Emperor Jimmu. He had a sacred sword (Kusanagi), jewel (Yasakani no magatama), and mirror (Yata no kagami) that became the Japanese imperial regalia.

When the serpent, Yamata-no-Orochi came back from the dead, Amaterasu, her dark avatar Shiranui along with her brothers, Susanoo and Tsukuyomi went to the serpent and kill it again. However, thanks to it being a creature of evil, humanity's own negativity brings it back repeatedly either to die by Amaterasu or Susanoo.

Other story says that Amaterasu blocked herself in a cave was due to an argument with Susanoo when he surprised the goddess with a monstrous flayed horse when she was quietly weaving in her palace with her younger sister Waka-hiru-me.

In Kojiki, her name is unified to be "Amaterasu-Omikami" (天照大御神). In Nihon Shoki, she is more often addressed by her full title of "Amaterasu-Sume-Okami" (天照皇大神), or alternatively "Sume-Omikami" (皇大御神), which literally means the "Great Imperial Deity." In the medieval period, Amaterasu was often called "Tenshô Daijin" in on'yomi reading.

Amaterasu holding the Yata no Kagami (Art by FragileWhispers)

Amaterasu looking at her reflection (Art by JessiBeans) 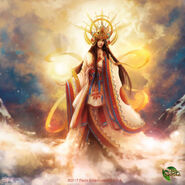 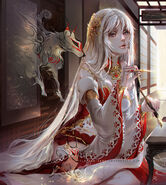 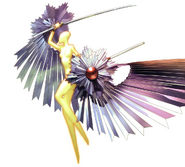