Gods and Demons Wiki
Register
Don't have an account?
Sign In
Advertisement
in: Beings, Demon, Spirit,
and 7 more

Amaymon is a Prince of Hell who represents the sin of Wrath along with being an Archdemon under Asmodeus.

Amaymon is a powerful archdemon that is an extra member of the Seven Princes of Hell. Asmoday and sometimes Gaap are said to be his servants. He also has Emlon, Madyconn, Ocarbydatonn, Boytheon and Seere as his servants.

He is the King of either the West or East. Depending on the direction, either Ziminiar, Corson, and Gaap or Egyn, Oriens, and Paimon are treated as the other kings along with him. A silver ring is required to be worn on the middle finger when summoning him, as his deadly breath will kill the summoner otherwise.

As a demon, Amaymon is able to take many different forms. His mortal appearances are either that of an old man or a lion.

Amaymon's current human form is that of a teenage boy, standing at 5'8"; an average height. He has a spike of hair which is lightly colored compared to the rest of his dark green hair and has long claw-like black fingernails. He wears a jacket that has cross bones as buttons. He also wears green arm warmers and a black and pink short sleeved shirt (same colour as his spike) under his jacket, with rips at the ends. When he is in his demonized form and at full power, he has longer ears, two horns on his head, an alligator-like tail, and muscular arms like his familiar, all of which are green with red markings.

Amaymon appears to be calm and collected, but holds his power in a very high regard, very brash and, overall, quite carefree. However, he shows great anger and annoyance when someone ruins his fun, like when Mephistopheles intervened in his fight with a Power. He can be playful and doesn't take his opponents seriously in battle, which suggests that Amaymon is either highly arrogant, or hideously skilled in combat. He has also been shown to care for his familiar, and showed great distress when it was killed.

He is said to have a poisonous breath and in The Lesser Key of Solomon states the Exorcist or conjurer must be in possession of a Silver Ring, duly consecrated and worn on the middle finger as a form of protection against this poisonous astral breath.

In the Sacred Magic of Abramelin the Mage, Amaimon is said to know the past, present, and future. He can cause visions and enable people to fly. He provides familiar spirits and can cause other spirits to appear and assume diverse forms. He can summon protection and revive the dead. His domain is the south.

Scot's Discoverie of Witchcraft mentions that Amaimon is known for his dangerous, putrid breath and describes a technique of protection where conjurors wear a magick ring and hold this against their faces to ward away Amaimon's harm. The same technique is advised for the infernal king Bileth. Mathers also notes Amaimon's reputation for fiery or poisonous breath.

According to some Grimoires, He is said to be the only one who has power that rivals Asmodeus. A curious characteristic of this Spirit is shown during the Evocation of Asmoday to visible appearance, when the Exorcist must stand upright with his Cap or Headdress removed in a show of respect; for if he does not it is Amaymon who will deceive him and doom all his work.

According to the grimoire The Book of the Sacred Magic of Abramelin the Mage translated by S.L. MacGregor Mathers, Amaymon was one of the eight Sub-Princes, described as an Egyptian devil whom Abramelin restrained from working evil from the third hour till noon and from the ninth till evening. In this text, he is one of eight sub-princes summoned to serve the magician as part of the Holy Guardian Angel rite. Mathers relates his name to a Greek root meaning “terrible violence and vehemence.”

He appears in Wierus's Pseudomonarchia Daemonum under the name Amaymonis. Here he seems to be a chief among evil spirits. He is mentioned in connection with both Asmodeus and Bileth, and he is tied to deception and abominable practices. Although he is associated with the south in the Abramelin material, Amaimon is listed as the “King of the East” in Dr. Rudd's Treatise on Angel Magic. Here, the name of this demon is rendered Amaymon. 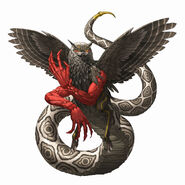 Amaymon and Egyn (Art from The Grimoire of St Cyprian: Clavis Inferni) 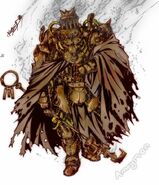