Gods and Demons Wiki
Register
Don't have an account?
Sign In
Advertisement
in: Articles that need art credits, Beings, Archangel,
and 6 more

Anael is the True Archangel of love, passion and sexuality.

Anael, meaning "Joy/Grace of God", is one of the archangels of creation created by God in Jewish lore and angelology. She illuminates love, passion and sexuality and is often listed as one of the seven archangels. She has six wings and gives rise to feelings of love among people. She is the angel of December and is associated with the zodiac sign Capricorn. She is also known as the angel of victory. She is also thought to be the symbol of lasting friendship and lust.

Anael is usually associated with the planet Venus, similar to Aphrodite and Ishtar. She is also the archangel of Sephirah Netzach, one of the many emanations of the Creator known as the Tree of Life. Anael was sent to protect Mary during her pregnancy. She is also one of the archangels in the Heavenly spheres to also been known as a female, the others being Gabriel, Uriel, Ariel and Phanuel.

Anael is able to recover lost secrets of natural healing remedies. His duty is to fasten the bonds of love between young men and women. Aniel is known to radiate inner qualities outwardly like the full moon. Mysterious, Anael has been revered since the Bab­ylonian era, which tied astronomy into religion. Anael is associated with the cycle of the moon, and thus, draws his power from the moon itself, reflecting its enormous power and radiant beauty.

When she appears, it is said to be in the form of a beautiful man or woman with six wings.

Mysterious and feminine, Anael has been revered since the Bab­ylonian era, which tied astronomy into religion. Haniel is associated with the cycle of the moon, and thus, draws her power from the moon itself. Because of this, Anael has been seen as Selene, the Greek Titan goddess of the moon by the ancient Greeks.

Anael as the regent of the moon (Art from Museo Soumaya Plaza Loreto, Mexico City) 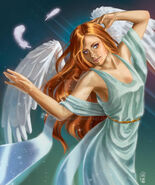 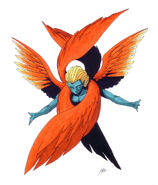 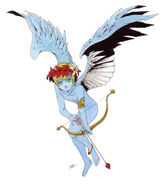