Gods and Demons Wiki
Register
Don't have an account?
Sign In
Advertisement
in: Rank, Angel, Angel of Death, Abrahamic

An Angel of Death is a special and important class of angel created by God with the assistance of Death. They are responsible for reaping the souls of the faithful and pure when it is their time to die.

The main mission is to attend to Death with collecting the souls of the religious that worship God (while the reapers collect the souls of everyone else), they also end the life at their appointed death unless they have a mission from a supernatural entity or made a contract with a demon.

Like Reapers, Angels of Death are mostly seen as cloaked winged figures with weapons that claim the souls of the deceased and take them to Heaven, however this is not always the case and they have been seen in varies forms throughout history.

Their main weapon they use for their job is a scythe as they use it to rip the souls of the living when they are meant to die. Because of their weapon and job, they are commonly mistaken to be reapers, though they do work together under the orders of Death or Fate.

The first angel of death to be created was the Archangel of Death, Azrael who rules the entire host of angels of death along with many others high-ranking angels.

Their very presence is extremely purifying both physically and spiritually, and they wield tremendous hybrid abilities mixing angelic and necrotic energies for particularly potent effects.

Samael is considered in Talmudic texts to be a member of the heavenly host with often grim and destructive duties. One of Samael's greatest roles in Jewish lore is that of the main angel of death and the head of satans. 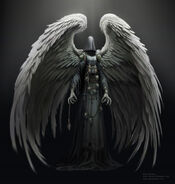 A high-ranking angel of death (Art by velinov) 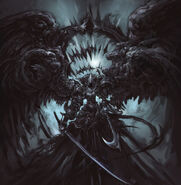 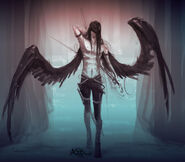