Gods and Demons Wiki
Register
Don't have an account?
Sign In
Advertisement
in: Beings, Deity, Male Deity,
and 9 more

Ahriman, Anra Mainyu, Aharman, Tsel, All the World's Evil, The Evil One, the Shadow of God

Angra Mainyu is a Primordial Deity (and personification) of all evils in existence who was a creation within the primordial chaos of existence like all other Primordials.

Unlike many other Primordial Deities, Angra Mainyu had instead vowed allegiance to Therion and helped him in his war against God, having seen the corruption of Arcuthas. In truth, Angra Mainyu is not loyal to the Dragon but instead wishes to use him to literally destroy all of Creation.

As Angra Mainyu is a Primordial Deity, he is an extremely powerful entity. He possess immense strength, Durability and Speed, and cannot be harmed by anything that isn't a Primordial, Outer God or Arcutha.

The battle between the two forces continues and will last for thousands of years, divided into eras. After the fourth era, three saviors will appear, who will destroy Angra Mainyu and all his forces of evil. In a variation of this legend Ahura Mazda created Angra Mainyu in a moment of doubt when he was making the universe.

After his master was killed, Angra Mainyu started to destroy Creation, hoping that God would notice and send him to The Abyss where Arcuthas were locked, he also, at this time, created an avatar called Ahriman trying to both spread evil and to try to resurrect the Dragon. His hopes were answered as he was locked, he tried to convince the Arcuthas, thinking that they would accept as he thought them totally under Therion's control, he discovered that the Arcuthas weren't obedient to Therion anymore as the Dragon was considered deceased.

As he is not as powerful as Calur, he did not dare to fight him directly but instead, he faked his death as to manipulate him as an Arcutha known as Tsel (although Calur is already aware of it and pretended that he didn't know). He has also once corrupted and presided in the Holy Grail for thousands of years, giving wishes in distorted ways, before being found out by God who punish him for blaspheming one of His Holy Relics. 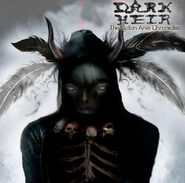