King of Terror, False Messiah, Messiah of Darkness, Al-Masih ad-Dajjal, Son of Satan, The Lie, Man of Sin, The Beast from the Sea, Adam of Darkness, anti-Adam

The Antichrist is a figure described in the Book of Revelation within the Christian Bible, whom is the antithesis and ultimate enemy of Jesus Christ. The Antichrist is also a figure described in the religion of Islam, and more particularly, the Sunnah/Authentic Hadith of Muhammad. He is the archenemy of Christianity and Islam and is considered to be the final opponent that mankind shall face before their eventual liberation by God.

Depictions of the Antichrist vary widely depending on the source and are often a product of politic unrest as it was, and remains, a popular tool of propaganda to infer that your enemy is in some way the Antichrist and thus a figure that must be defeated for the good of all humanity. Therefore he may be considered the secondary antagonist in Christianity and Islam, the first being The Devil.

His sole mission is to tempt mankind and lead nations to war, to cause sin, corruption to rise, and basically create Hell on Earth. It is taken to its logical conclusion the Antichrist is doing the exact opposite of what Jesus was doing when he was alive.

It is said that he will disguise himself as a humanitarian well known in the world, and will trick the disbelievers with speeches of peace, prosperity and plenty but not to lead them to God, but as ends in themselves.

Satan will then ally himself or even possess the Antichrist, where he will set images of himself on the temple of Temple Mount and demand the entire world to worship as a god. The False Prophet will perform many satanic miracles and wonders such as bringing fire down from Heaven to convince everyone that he is the messiah. The Antichrist will command everyone that in order to worship him, they must take the mark of the Beast on their foreheads or hands or otherwise, they won't be able to buy and sell goods. Those who do not the take the mark of the Beast are horribly persecuted in a worldwide genocide committed by the Antichrist.

During the final years of the Tribulation, the Antichrist and the False Prophet will lead many nations to wage a global war in the Battle of the Armageddon, which coincides with the Second Coming of Jesus Christ. As soon as Jesus Christ and His heavenly armies appear in the heavens, which consist of angels, saved Christians and those who were among the Rapture, the Antichrist and his armies immediately fire at them and attack them. Jesus proceeds to send fire from His mouth in time, destroying the majority of the Antichrist's armies. The Antichrist and the False Prophet are thrown into the Lake of Fire, where they are tormented by the fires for eternity and Satan is locked up in a bottomless pit.

Islam, though having a different view on Jesus, also recognize the Antichrist as future enemy of mankind, calling him Al-Masih ad-Dajjal, the "false messiah, liar, the deceiver".

Although traditionally seen as a single being, there are some people who believe that the Antichrist is actually a being that returns several times throughout human history. This is especially prominent in works by Notradamus, whom depicted the Antichrist in historical-figures such as Napoleon, Adolf Hitler and other historical tyrants as well as traditional enemies of the Christian church such as the Roman Empire; prior to its conversion to Christianity. The Antichrist has no true form, instead it is revealed that he is comprised of all the corruption and evil that befall and spread throughout humanity. The role of the Antichrist, whether it be the singular figure or the ageless figure depicted by Notradamus, remains the same.

In contemporary times, the Antichrist is expected to rise from either political, religious, occult or economic backgrounds. Notably dispensationalist Christians believe he will emerge from either a Catholic, Atheistic, Agnostic, Jewish or New Age-background. 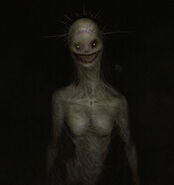 The Devouring Wolf (Art by RavenMadwolf)