Gods and Demons Wiki
Register
Don't have an account?
Sign In
Advertisement
in: Beings, Anunnaki, Nibiru,
and 9 more

Anu (not to be confused with the God's Avatar or the Primordial of the same name) is a powerful extraterrestrial and the ruler of the planet Nibiru.

Anu is an Anunnaki, a very intelligent and technological alien race that inhabits the planet Nibiru. The planet Nibiru, unlike Planet Earth, has only one great government, which is from the family of Anu, the current supreme ruler of the planet.

Anu's appearance is a bit difficult to say, as apparently the Anunnaki race is the type that can shapeshift into a stronger or weaker form. However, from what is said, his appearance was that of a humanoid being, similar to a man, but with a dark bluish body, having huge wings on his back and several horns on his head, giving him the appearance of a Devil rather than a God. However, when it transformed, its appearance changed drastically, with its body getting bigger and bigger until it surpassed one hundred meters in height, having the appearance of a colossal greyish dragon with red accents similar to magna. Perhaps this is their true appearance and the reason why dragons were seen as demons and enemies by humanity.

It is said that he was with this form that he terrorized and annihilated much of the planet Mars, and he intended to do the same with humanity if it were not for the intervention of the Angels.

In the distant past, hundreds of thousands of years ago, Anu sent his various servants to look for life on other planets and, over time, Anu became increasingly tyrannical, dethroning kingdoms and kings from various planets to be part of his empire.

One of these planets was the red planet, Mars, which at the time was full of life. Anu himself went to the planet to try to oppress the inhabitants there, and when his proposal was rejected, Anu ordered the planet's destruction. Anu's henchmen destroyed several cities with earthquakes, very powerful hurricanes and especially with their powerful high-caliber weaponry, bombs incredibly more powerful than those on Earth that, when they were exploded in various quantities on the small red planet, it was totally devastated.

Anu also tried to do the same with Earth, when he landed on the planet and for a time took advantage of humans' faith in gods and began to say that he was God and the creator of all things. What a lie. However, to Anu's surprise, he had chosen the worst time to attempt to attack Earth, as the time he did so was the time when Angels and humans began to have their first relationships, approximately in 90,000 BCE, which resulted in Anu and his army being surprised by legions of Angels defending the children of Eden and destroying Anu's troops. 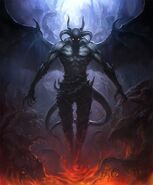