Gods and Demons Wiki
Register
Don't have an account?
Sign In
Advertisement
in: Beings, Female Deity, Fallen,
and 2 more

The Messianic Goddess of Witchcraft, Great Goddess, Moon Goddess, Queen of the Witches

Aradia is the messianic daughter of the goddess Diana and Lucifer who came to Earth to teach witchcraft to her oppressed worshipers for them to use against the Roman Catholic Church and the upper class.

Aradia is the daughter of the god of light and the moon goddess Diana, who came to Earth to free people from slavery and teach them the mystical and healing arts. She represents the embrace of their own shadow, which might be seem scary, but makes them stronger and wiser in the end. Aradia was sent to Earth by her mother Diana, the Protectors of the Witches, to teach Witchcraft to men and, thus, bring back the pagan religions of old.

While originally created by Charles Godfrey Leland, Aradia eventually became an important figure in Wiccan and Neo-pagan religions. Some Wiccan traditions use the name Aradia as one of the names of the Triple Goddess, a major deity in Wicca. 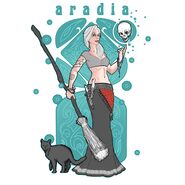 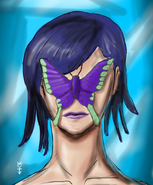