Ares is the Greek god of war. He is one of the Twelve Olympians, and the son of Zeus and Hera.

In Greek literature, he often represents the physical or violent and untamed aspect of war, in contrast to the armored Athena, whose functions as a goddess of intelligence include military strategy and generalship. Ares also had numerous mortal offspring. Many of these inherited their father's violent temperament and in myth were often cast in the role of villains. In one myth, he created the Amazons.

The Greeks were ambivalent toward Ares: although he embodied the physical valor necessary for success in war, he was a dangerous force, "overwhelming, insatiable in battle, destructive, and man-slaughtering." His twin sons Phobos and Deimos and his lover, or sister, Enyo accompanied him on his war chariot. In the Iliad, his father Zeus tells him that he is the god most hateful to him.

An association with Ares endows places and objects with a savage, dangerous, or militarized quality. His value as a war god is placed in doubt: during the Trojan War, Ares was on the losing side, while Athena, often depicted in Greek art as holding Nike in her hand, favored the triumphant Greeks. Ares was most often characterized as a coward in spite of his connection to war; he responded to even the slightest injury with outrage.

Ares' main attribute was a peaked warrior's helm. Even in domestic scenes, such as feasts of the gods, he was depicted either wearing or holding his helm. The god's other attributes included a shield, a spear and sometimes a sheathed sword. Although his shield was often decorated with an emblem of some sort, ancient artists simply used a generic one drawn from their standard repertoire rather than something specific to the god. Ares was usually dressed as a standard Greek warrior with a short tunic, breastplate, helm and grieves.

He is well known as the lover of Aphrodite, the goddess of love, who was married to Hephaestus, god of craftsmanship. The most famous story related to Ares and Aphrodite shows them exposed to ridicule through the wronged husband's clever device. However, the gods laughed at the sight of these naked lovers, and Poseidon persuaded Hephaestus to free them in return for a guarantee that Ares would pay the adulterer's fine. 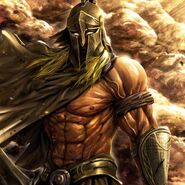