Gods and Demons Wiki
Register
Don't have an account?
Sign In
Advertisement
in: Beings, Demon, Archdemon,
and 3 more

Argos, The Chaos, Dominator of Chaos, Overlord of Chaos, the Despair, the First Banished

Argosax is a powerful demon god who ruled the Abrahamic Underworld for a time and is considered one of the most powerful demons in Hell.

Argosax is considered the most wicked deity in the legends of Protectors of Vie de Marli.

In his true form, the Despair Embodied, Argosax possess an androgynous appearance depending on the form in which he shifts (possessing both masculine and feminine traits), although both his male and female appearances feature a fire-like appearance in the formation of a human with horns protruding from the head. He also sports two massive fiery wings.

Argosax did not display much personality as he rarely communicates, however, he is often referred as the king of evil and the Protectors of Vie de Marli describe him as being supremely evil. He believes that actions are are much more important and meaningful than words. What is known is that he is still power-hungry and craved control as well as destruction. He was also somewhat envious and petty as he did not wish to be under the rule of the princes who waits instead of outright acting.

Argosax holds a special disdain towards the prince Mundus whose hatred is complied with equal malice. Even with them being on the same side, they are unwilling to work together and have show antagonism to the other. However, Argosax acts very much like Mundus, being very arrogant and exalting himself as a god above both realms (the Human World and the Demon World). However, Argosax have shown caution to those who can be a threat to him, as seen with not just Sparda but his son Dante as well. He knew that both had defeated Mundus beforehand and so held nothing back against them.

As a demon god, Argosax is an immensely powerful being, ranking above most demon nobles and demon kings and managed to have subdued all demons that dwelled within Mundus' sector. He was also considered to be Mundus' equal and one where the Dark Emperor required the aid of Sparda to defeat and banish from beyond Hell. Though far beneath the Seven Princes, he is still incredibly powerful in his own right. It is said that his very appearance could warp the entire environment of the human world to where everything becomes nightmarish monstrosities and constructs befitting the imagery of what people view as Hell.

He was capable of challenging both Dante and Sparda, the latter needing the assistance of the Protectors to seal him away with the Arcana in their second encounter and aiding Mundus, his former master, in defeating and banishing him in their first. Argosax has even distorted and rearranged the flow of time together with the Inferno's approach, even creating paradoxes linking the past and together to allow some like Phantom to reemerge. The demon knight Bolverk, who was powerful enough to be considered a nemesis to Sparda, was but a loyal servant of Argosax and barely even compared in power to his master. Even when stuck in Hell's edges, Argosax was able to reach out to the humans that worshipped him though according to Arius it required tremendous effort from Argosax simply to communicate from the hellish abyss.

During the reign of the God of Evil, a collision of the energies from the depths of Hell came to combine, which after taking years to form, created the demonic god known as Argosax. Argosax would believe that he was one to slay the God of Evil and unite the underworld as one with him in charge. With his lust for power created, he amassed an army of thousands of the demons with his power alone that would loyally served under him with three generals being his main enforcers. The fire demon Balrog would be his right-hand man at the time, while the demon knight Bolverk would his most powerful soldier.

However, by the time he was finished, Mundus had already succeeded in what Argosax planned to do, having eaten a fruit of the Qliphoth Tree. Angered from Mundus' actions, Argosax went on to attack the Dark Emperor as he wanted to take the entirety of the Inferno for himself. And so, Argosax appeared in Mundus' territory over two thousand years ago, and waged a great war against the devil prince Mundus where he would be met with resistance with Mundus' generals and army.

The war between the two ended up splitting the Underworld in two sides, one ruled by himself and the other ruled by Mundus. Mundus had the Knights of Hell join his army who all were able to defeat the entirety of Argosax's armies. Mundus fought against Argosax, and was later joined by Sparda, who together defeated and banished the Demon God into the void that lay beyond the borders of Hell.

After Sparda's rebellion and Mundus's subsequent defeat at his hands, Argosax took control over Mundus' territory and installed himself as its ruler through sheer force.

More than a millennium later, a portion of the Vie de Marli began worshiping Argosax, eventually managing to summon portions of his being, piece by piece, to the human world until he was fully summoned with Argosax exerting immense effort just to reach out from the borders of Hell. The Protectors deemed him a threat to the safety of the island, and attempted to banish him back into Hell. Unable to complete the task themselves, they were assisted by Sparda in sealing Argosax away with the Arcana relics.

In the modern era, Arius, the owner and founder of the Uroboros Corporation, tries to obtain the Arcana in order to release Argosax, take his power, and become a god. The Arcana are four holy relics used to seal Argosax, and by uniting them at the solar eclipse, a gate to Hell itself will open. Though Dante manages to interfere with Arius' ritual by replacing the Medaglia with his own double-sided coin, the doorway is still partially opened, and Arius absorbs part of Argosax's power. Because the door is unstable, whoever enters may not be able to return, so Lucia demands to go, claiming she is expendable.

However, Dante puts the decision to his coin and, after winning the coin toss, goes in, just like his father once did. Inside the portal, Dante finds Argosax in its first form: a hideous pile of flesh composed of pieces of Phantom, Griffon, Orangguerra, Jokatgulm, Nefasturris, and Furiataurus. These pieces were sacrificed to Hell mainly for Argosax to take them into himself and use them reconstitute his body after being incorporeal from the effects of his defeat from Sparda. During their battle, Argosax's power begins to possess Arius, whom Lucia defeats.

After slaying each piece, a stalk bearing an egg extends from the mass, and Argosax's true form, The Despair Embodied, hatches from it. As The Despair Embodied, Argosax appears as an androgynous, horned, angelic being composed of fire, able to change sexes at will. Despite its new form, it proves ultimately ineffective to Dante, whom proceeds to defeat Argosax with a shot to the head, dissipating into nothing in defeat.

The name Argosax may be based on "Argos", the another name of Argus in Greek mythology. Also, Argos is means "bright, shining" from Proto-Indo-European dialect. 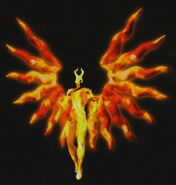 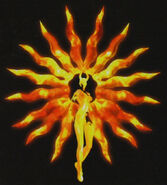 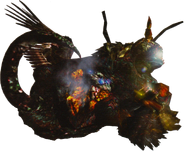