Gods and Demons Wiki
Register
Don't have an account?
Sign In
Advertisement
in: Beings, Demon, Archdemon,
and 7 more

Fierce Lion, Fearsome Lion, One Like a Lion, Lord of Chaos, Knight of the Swords, Lord of the Higher Hell, Lord of the Seven Darks, Former Guardian Angel of Enoch

Arioch is the devil of vengeance and chaos that joined Lucifer's side in the War in Heaven.

Arioch is a demon that presides over swords and chaos. He is also said to be the demon that holds sway over revenge. He was Enoch's guardian angel, but fell from grace when the angels revolted. He is the keeper of demonic swords, such as Storm Bringer. He was known as the "fierce lion" and could have possibly been acquainted with the Virtue Ariel.

Arioch is the patron of Melniboné and has a personal relationship with Elric, who was the first ruler to summon him to Earth in a long time.

He appears as a being with black figure with bat wings, horrible to look upon. with a flaming torch and a bloody axe. He has also been known to take the form of a large black fly.

In his human form, he usually appears as a beautiful youth, mainly with blond hair.

He is sophisticated and highly intelligent, though possibly insane.

When he still served God, Arioch was Metatron's favorite angel in his God-loving choir. Arioch was originally was meant to be a future guardian angel that was entrusted with the protection of St. Enoch as his Guardian Angel. However, it was not when the morning star Lucifer had started to coupe against God, which resulted in Arioch following his song and became a fallen angel.

Arioch battled against Michael's opposing forces who tried to prevent Lucifer's forces from raiding the Empyrean. Arioch and a small host of rebel angels were ordered by Lucifer to find the chamber that holds the source of Vril and bring some to him. However, Arioch was stopped and defeated by Abdiel while the rest were stopped by Azrael.

At the end of the war, Metatron personally struck Arioch by the wings, crippling them forever after, and were forced to be torn and replaced with wings of "hideous black iron".

Arioch also appears in the Book of Genesis as the name of the "King of Ellasar", who participated in the Battle of the Vale of Siddim, where the cities of the Jordan River plain revolted against Mesopotamian rule 13 years after the destruction of Sodom and Gomorrah. The battle is described in Genesis as consisting of four kings, led by Chedorlaomer of Elam (Amraphel, Arioch, Chedorlaomer, and Tidal), engaging in a punitive expedition against five kings of Canaan who rebelled against Chedorlaomer (Bera, Birsha, Shinab, Shemeber, and the king of Bela). The same story is also mentioned in the Book of Jubilees, where Arioch is called "king of Sellasar".

Some historians have placed the area where Arioch ruled in Asia Minor, but theories as to its specific locations differ, with some claiming it was in Pontus while others cite Cappadocia and Antioch. There are also sources which associated Ellasar with the kingdom of Larsa and suggested that Arioch could be one of its kings called Eri-Aku, an Akkadian translation for the name Rim-Sin, where rim meant servant and Sin is the Semitic name of the moon god (Agu or Aku in Akkadian). By the 20th century, this theory became popular so that it was common to identify Arioch with Eriaku — through the alternative reading of either Rim-Sin or his brother Warad-Sin, who were both believed to be contemporary with Hammurabi. 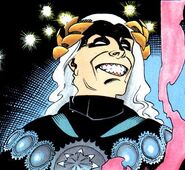 Arioch in his armor (Art by Leonid Kozienko) 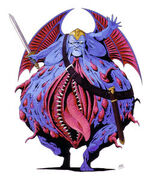