Gods and Demons Wiki
Register
Don't have an account?
Sign In
Advertisement
in: Beings, Human, Mythology,
and 7 more

Arthur Pendragon was the legendary ruler of kingdom of Camelot and the head of the Knights of the Round Table. He was a powerful and mighty ruler that battled the Saxons for years, and always emerging victorious. He was also the husband of Guinevere.

King Arthur is a legendary British leader who, according to medieval stories and chivalry novels, led the defense of Britain against Saxon invaders in the late fifth and early sixth centuries. The legendary King Arthur began to arouse great international interest through the popularity of the fantastic and imaginative chronicle Historia Regum Britanniae (History of the Kings of Brittany), composed by the Welsh cleric Godfrey of Monmouth.

Despite being a well-known figure and serving as inspiration for several works in the 21st century, it is not known if such a king or person actually existed, some historians claim that yes, but, in any case, the heroic figure of the leader of the Britons is preserved today. through literature, cinema, theater and other forms of communication.

Arthur was a tall man of good physique, possessing stiff muscles that made him look like a giant. He had a thick beard and hair that fell to his neck. Arthur was dressed in classic king's clothes and wore a crown on his head.

In his current human form, Arthur has short blond hair and green eyes. He has the height and weight of a standard man in his 20s. He has a beautiful form and appears composed. He wears the standard armor of a knight. The armor parts are silver in color. While the tunics part are blue. He also has a black and white hood attached to the back of the armor part of his neck. In this form, his height is 1.81 meters and your body weight is 68kg.

He has the sense of values of a matured man, as well as a strong sense of justice. He will bring things that bring virtue and goodness closer, and will ascertain those that bring atrocity. He is the image of a hero one can feel good about.

Arthur was born from the unionship of King Uther Pendragon and Igraine, The Duke of Cornwall, Goloris' wife. During a battle between the King and the Duke's armies after they left a feast without his permission, the King turned to the wizard Merlin for help. Merlin took pity on the poor king and agreed to help him. But with a price. Any child born of the union, he said, would have to be turned over to his care.

With the aid of Merlin, Uther was victorious and took Igraine as his wife when the Duke seem to have fell in battle. Nine months passed, and the Queen gave birth to a baby boy. The royal couple named their son Arthur. But the King had promised to turn over any children born of his union with Igraine, to Merlin Reluctantly, Uther gave their only son over to Merlin's care, and Igraine was forced to say goodbye to her child forever. Merlin assured her it was for the boy's own good, but she never forgave him.

Discovery of the King

Merlin secretly took him to be raised at the castle of Sir Ector, a loyal ally of the King's. There, the young prince was raised as the bastard child of Sir Ector's, and no one, not even Ector himself, knew the boy's true identity. Meanwhile, all was not well with the King. Just months after giving away his only son, Uther Pendragon turned ill, and died shortly after. With no heir to lead the kingdom, the country fell into despair. Rival dukes and lords disputed over who was the best fit to rule England. In the midst of the turmoil, the nobles called on Merlin to find a solution. Having seen to it that baby Arthur was safe, he erected a large stone, on top of which sat an anvil, in a churchyard in Westminster, a region of London. Stuck in the anvil was a sword.

The sword was magic, Merlin explained, and only he who was fit to rule England could pull it from the stone. Nobles from far and wide came to try and pull the sword from the stone, but not even the strongest of men could accomplish the task. Eventually, the sword became forgotten, and England fell into greater ruin. However, it was not until Merlin brought Arthur before the Sword in the Stone. A crowd had been assembled, and was waiting anxiously. Arthur began to pull the sword. The sword came loose. The crowd cheered, and Arthur was crowned the new King of England.

After being crowned king, Arthur indeed proved that he was the greatest warrior ever alive. As King, he used his skills in fighting and leadership to drive off all hostile invaders from Britain. But his real strength was in the wisdom he had received from his instructor, Merlin, who had taught him to use his wits, rather than brute force, to overcome his enemies. From Merlin, Arthur had learned to be a wise and just king, who fought only to protect his people, and never for ill deeds.

The people of Britain, finally relieved of their suffering, happily welcomed him as their new king. Not even the dukes and lords quarreled over the right to rule anymore, for Arthur had indeed brought the peace and prosperity that the kingdom had long awaited. Under his rule, laws were made with justice and mercy, and the people were treated fairly. He named his kingdom Camelot, and his coat of arms was the red dragon.

However, it was all good. Even if Igraine loved Uther, she love Goloris much more, coming back to his house she saw the duke alive and well with their children happy. One of the children was a witch that will later be trained by Merlin himelf, Morgan Le Fay. The Witch along her siblings were obsessed to have revenge against 'her' Arthur for the crimes his father had cause. Morgan's Sister Morgause had once came to Arthur's room and gained a child from him. This child was Mordred Predragon. 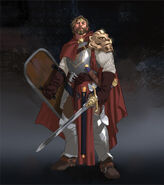 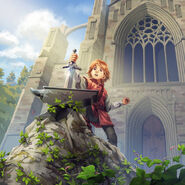 little Arthur pulling out the sword (Art by Nikogeyer)