Gods and Demons Wiki
Register
Don't have an account?
Sign In
Advertisement
in: Articles that need art credits, Beings, Deity,
and 9 more

Asherah was a major northwest Canaanite mother goddess. She was the consort of the chief deity El and the mother of 70 other gods.

It is believed, though not accepted by Judeo-Christian belief, that Asherah may have been the wife of God. Despite the fact that she is believed to be the wife of the Almighty, she is surprisingly quite mysterious as the historians saw that there was very little information about her. Asherah's current whereabouts are unknown as well, as very few beings in creation know where resides.

Asherah is more than a mere deity, she is a word, a concept, a philosophy, an abstraction, an entity born from the Khaos before the beginning of the universe, personifying concepts that would still exist. Which makes its characteristics inexplicable. However, she was always described as a supernatural beauty, causing Yahweh to fall in love with her.

Asherah has been proved to be brave, since when she met Barbelo she called her "co-wife", putting herself on the same level as the primordial aeon, even though she knew that if she irritated the Mother of Creation, Barbelo could kill her with a snap of the fingers. Luckily the Goddess of Silence never took it personally.

As a primordial entity, the goddess Asherah is one of the most powerful entities in creation, she is so powerful that her power is believed to be equal to that of God's avatar, Yahweh, or even superior to him. She claims she could recreate all Ten Great Plagues of Egypt if she wanted, and even send a new Global Flood, only without an ark this time. She along with Yahweh, were worshiped as the supreme gods in the Canaanite religion, and was worshiped as God's wife by the Hebrews as well, showing that despite not participating much in earth events, the fame of her power travels across the worlds. She also aided Khaos in the Primordial Wars, although her role is unknown, it is clear that she was raised to be a goddess powerful enough to face the Outer God and the Arcuthas.

After the creation of the Earth and the beginning of the human race, Asherah, along with her brother El, created their own pantheon.

One day, thousands of years ago, one of the avatars of God, Yahweh found the group of gods and decided to join them. Asherah and Yahweh ended up falling in love with the God and the two married, becoming the national gods of Israel. The Angels didn't appreciate this as God's wife was supposed to be Barbelo, however since she became Yahweh's wife she in turn became God's wife. The angels started to destroy her shrines so as to maintain purity of His worship, and the angels told the people that she was worshiped in a cult capacity.

Asherah became increasingly marginalized in the scriptures to the point of being reduced to her cult object—the stylized tree or wooden pole which became known as asherah or asherim. Trees were revered as symbols of life and nourishment in arid regions and so became associated with Asherah and her cult. The ruling elite propagandized against goddess worship by integrating the story of the fall of mankind to the tree which was clearly associated with Asherah.

Similar to what happened during Egypt, the Prophet Elijah challenged in the name of God challenged the gods of Canaanite pantheon, specifically Baal and Asherah. He was a prophet of God against 450 prophets of Baal and 400 prophets of Asherah, yet Elijah won and once again the Israelites declared that there was only one God of Israel.

The only way she is worshiped now is by minor pagan religions, she can only get power from desperate cults which, if anything, probably taint her name further. What was once a very respected goddess in the Canaanite pantheon and even queen of the gods is now at best referenced as a demon who tries to seduce humanity into sinning and falling, despite never doing anything of the sort.

As much as the ruling elite tried to inhibit Asherah and Yahweh’s "marriage", their union appears solidified in an ancient blessing seen with some regularity at a number of excavation sites in the region. The inscription reads:

Not only was this engraving found in the 9th-8th century BC Israelite caravanserai, Kuntillet Ajrud, the same text was found in a number of sites thought to be Yahweh sanctuaries, such as in Samaria, Jerusalem, Teman, and in the Biblical kingdom of Judah, at the ancient burial site of Khirbet el-Qom, dating to 750 BC.

Like God, she is called by several different names, such as Astarte, Inanna, Ishtar, who are all goddesses related to the moon and motherhood, it is unknown if they are also the same person or just avatars of the Goddess.

Asherah shares similarities with the Shekhinah, as both are said to be the wife of God, are symbolized by the Moon while God is symbolized by the Sun, both are goddesses related to the people of Israel and were "married" to the God of the Hebrews, Yahweh. Despite this fact that the two are the "wife" of Yahweh, the two have never been seen together in the same place, which may indicate that the two are actually the same person, or two personalities within the same entity.

Ugarit sources from before 1200 BC almost always credit Athirat with her full title rbt ʾaṯrt ym (or rbt ʾaṯrt). The phrase occurs 12 times in the Baʿal Epic alone. The title rbt is most often vocalised as rabītu, although rabat and rabīti are sometimes used by scholars. Apparently of Akkadian origin, rabītu means "(great) lady". She appears to champion her son, Yam, god of the sea, in his struggle against Baʾal. Yam's ascription as 'god of' the sea in the English translation is somewhat incorrect, however, as 'yām' (Hebrew: יָם‎) is a common western Semitic root that literally means 'sea'. As a result, one could understand Yam to be the sea itself, deified, as opposed a deity who holds dominion over it. Athirat's title can therefore been translated as "the lady ʾAṯiratu of the sea", alternatively, "she who walks on the sea", or even "the Great Lady-who-tramples-Yam". A suggestion in 2010 by a scholar is that the name Athirat might be derived from a passive participle form, referring to the "one followed by (the gods)", that is, "pro-genitress or originatress", which would correspond to Asherah's image as the 'mother of the gods' in Ugaritic literature.

Beginning during the Eighteenth Dynasty of Egypt, a Semitic goddess named Qetesh ("holiness", sometimes reconstructed as Qudshu) appears prominently. That dynasty follows expulsion of occupying foreigners from an intermediary period. Some think this deity is Athirat/Ashratu under her Ugaritic name. This Qetesh seems not to be either ʿAshtart or ʿAnat as both those goddesses appear under their own names and with quite different iconography, yet is called "Qudshu-Astarte-Anat" in at least one pictorial representation, aptly named the "Triple Goddess Stone".

In Israel and Judah

Between the tenth century BC and the beginning of their exile in 586 BC, polytheism was normal throughout Israel. Worship solely of Yahweh became established only after the exile, and possibly, only as late as the time of the Maccabees (2nd century BC). That is when monotheism became universal among the Jews. Some biblical scholars believe that Asherah at one time was worshipped as the consort of Yahweh, the national God of Israel.

There are references to the worship of numerous deities throughout Kings: Solomon builds temples to many deities and Josiah is reported as cutting down the statues of Asherah in the temple Solomon built for Yahweh (2 Kings 23:14). Josiah's grandfather Manasseh had erected one such statue (2 Kings 21:7). 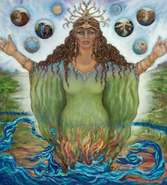