Gods and Demons Wiki
Register
Don't have an account?
Sign In
Advertisement
in: Beings, Demon, Hell,
and 9 more

Asmodeus is a king of Demons and earthly spirits mostly known from the deuterocanonical Book of Tobit. The demon is also mentioned in some Talmudic legends, for instance, in the story of the construction of the Temple of Solomon. He was supposed by some Renaissance Christians to be the King of the Nine Hells.

Asmodeus also is referred to as one of the Seven Princes of Hell. He also represents one of the Seven Deadly Sins being Lust. Asmodeus is the demon of lust and is therefore responsible for twisting people's sexual desires. It is said that people who fall to Asmodeus' ways will be sentenced to an eternity in the second level of hell. He is also a demon of lechery, jealousy, anger, and revenge. Asmodeus became the husband of Lilith after God castrated and imprisoned her first husband, Samael. Asmodeus is either a ruthless brutal monster or a mischievous demon endowed with a playful and satirical genius. He also admits to hating water and birds because both remind him of God.

He has hundreds of legions of demons under his command. He is one of the Kings of Hell under emperor Lucifer and Satan. He incites gambling, and is the overseer of all the gambling houses in the court of Hell along with being the Prince of Wrath and revenge. Some theologians compared him with Abaddon or Samael.

His form as an Angel is Asmodel, the Angel of April and Patience who rules the Zodiacal sign of Taurus. Asmodeus also has a child or clone also called Asmodeus though is usually called Asmoday. It is said that for people who fall under Asmodeus' ways will be sentenced to an eternity in the second level of Hell.

In Hell, Asmodeus looks like a human, however, he has stark black eyes and two rows of shark teeth sticking out of his mouth. In this form, Asmodeus has no hair on his head, but has a muscular appearance from the waist up and two bat wings protruding from his back. From the waist down, he has what looks like kangaroo legs and a long dragon's tail. His horrible appearance is capable of causing fear and repudiation in humans who fall into Hell, and that is the demon's intention.

Before his fall, Asmodeus was a fair and benevolent angel like most celestials, which he did until he had a relationship with the archangel Raphael. However, after his fall, he became an evil, lustful and evil entity.

When creating his temple, King Solomon invoked Asmodeus to aid in the construction of the Temple. The demon appears and predicts Solomon's kingdom will one day be divided. When Solomon interrogates Asmodeus further, the king learns that Asmodeus is thwarted by the angel Raphael, as well as by sheatfish found in the rivers of Assyria.

He is a deity of Persia's mythological pantheon and an infernal entity in Judaism. In Hell, he rules over gambling casinos. He is said to be the creator of carousels, music, dance, and drama and is currently the ruling patron of French designers. The Book of the Sacred Magic of Abramelin the Mage says that Asmodeus is the offspring of the incestuous union between Tubal-Cain and Naamah; others call him the "demon of impurity." In Jewish lore he is the father-in-law of Bar Shalmon, a fellow demon.

In the Book of Tobit, Asmodeus who fell in love with Sarah, Raguel's daughter and slays seven successive husbands on their wedding nights, impeding the sexual consummation of the marriages. He is described as 'the worst of demons'. When the young Tobias is about to marry her, Asmodeus proposes the same fate for him, but Tobias is enabled, through the counsels of his attendant angel Raphael, to render him innocuous. By placing a fish's heart and liver on red-hot cinders, Tobias produces a smoky vapour that causes the demon to flee to Egypt, where Raphael binds him though according to some translations Asmodeus is strangled. Perhaps Asmodeus punishes the suitors for their carnal desire, since Tobias prays to be free from such desire and is kept safe.

In the Talmud, Asmodeus is less malign in character, he appears repeatedly in the light of a good-natured and humorous fellow though he has his desires turn upon Solomon's wives and Bathsheba.

Sebastien Michaelis said that his adversary is St. John. Some demonologists of the 16th century assigned a month to a demon and considered November to be the month in which Asmodeus' power was strongest. Other demonologists asserted that his zodiacal sign was Aquarius but only between the dates of January 30 and February 8. Asmodeus was cited by the nuns of Loudun in the Loudun possessions of 1634. Asmodeus' reputation as the personification of lust continued into later writings, as he was known as the "Prince of Lechery" in the 16th-century romance Friar Rush.

According to the Kabbalah and the school of Shlomo ibn Aderet, Asmodeus is a cambion born as the result of a union between Agrat Bat Mahlat and King David though this is most likely the demon known as Adad who later named himself after Asmodeus.

According to the Courrier de l’Egypte, the people of the country still adore Asmodeus, whose temple sits in the desert of Ryanneh. He allegedly will cut himself into pieces and immediately after, disappear.

Asmodeus as a serpent (Art by IzzyMedrano) 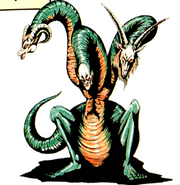