Malak al-Mawt, One Whom God Helps, Help from God, Angel of God, King of Atrocity, King of Skulls, Angel of Death, Death, The Grim Reaper

Azrael is the Archangel of Death and leader of the Angels of Death.

Azrael is, along with Gabriel, Michael and Israfil, one of the four major archangels in Islam, and is identified with the Quranic Malak al-Mawt. He is responsible for transporting the souls of the deceased after death. In comparison to similar concepts of angels of death, Azrael holds a rather benevolent role as the angel of death. However, Azrael is not necessarily the only angel of death. Tafsir al-Baydawi mentions an entire host of angels of death (which includes Rahab, Samael and Sariel), subordinative to Azrael.

He helps the souls of the deceased make the transition from the physical realm to the afterlife, and he comforts people who are in eternal grief from the death of a loved one. In art, Azrael is often depicted wielding a scythe and wearing a hood, since these symbols represent his role as the angel of death who is reminiscent of the popular culture’s Grim Reaper.

Azrael also fiercely hunts down souls who were unfaithful and unrepentant for their sins in their past life. Azrael appears to them to notify that their time on Earth had expired. If they don't agree with that, he uses his scythe to extract their souls from their corporeal bodies. Then he takes their souls to Hell, and makes it certain that they get their punishment. A damned soul stated that when Azrael was extracting his soul, it felt as though that every fiber of his muscles, bones, and even molecules were being violently and ferociously pulled, all while being mutilated at the same time.

The reason that Azrael refuses to reveal his true form is due to his absolute hideousness. Azrael's true form is in fact so terrifyingly awful, the mere sight of it could not only kill a human, but can drive even an lower class Angel, Demon, and other Monsters to madness. Only his archangel brethren and the most powerful demons and gods are immune to this, though some admit being uncomfortable when in the presence of his true form. Azrael is described as being completely covered in eyes and tongues, and the number of eyes and tongues constantly changes to reflect the number of people who are currently alive on Earth.

Being one of God's oldest Angels that came to existence, Azrael is frighteningly powerful angel. So much that he is considered the strongest Archangel of Death, rivalled and is only barely equaled by Samael, the Poison of God.

Azrael was the final plague of the ten plagues that God unleashed upon Egypt, causing the deaths of the firstborn children of Egypt but sparing the lives of the Hebrews. This event has since become known as the "Passover". His name became known when he carried the souls up to heaven to be judged by God.

Although some sources have speculated about a connection between Azrael and the human priest Erza, he is generally depicted as an archangel whose history long predates this figure. Rather than merely representing death personified, Azrael is usually described in Islamic sources as subordinate to the will of God with the most profound reverence, when he extracts the soul from a dying person, a good dying person will not feel the pain from the removal of the soul from his body, Azrael removing it with ease, and for those who are bad, the removal of the soul is tough and difficult.

Also, the Quran speaks about many angels of death. Islamic traditions explains that the lesser angels of death are for the common people, but saints and prophets meet the archangel of death himself. Azrael does not act independently, but is only informed by God when time is up to take a soul. According to one Muslim tradition, forty days before the death of a person approaches, God drops a leaf from a tree below the heavenly throne, on which Azrael reads the name of the person he must take with him.

Depending on the outlook and precepts of various religions in which he is a figure, Azrael may be portrayed as residing in the Third Heaven. In one description, he has four faces and four thousand wings, and his whole body consists of eyes and tongues whose number corresponds to the number of people inhabiting the Earth. He is constantly recording and erasing in a large book the names of men at birth and death, respectively.

He is also referred to as the angel of death in Islamic theology, known as Malak al-Maut, earning that title and that duty by assisting God in the creation of Adam, by gathering the clay from the Earth itself. 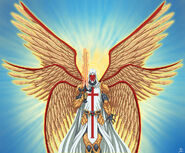 The Angel of Departure (Art by PeteMohrbacher)

As the personification of Death (Art by Charongess)

He who reaps (Art by helgecbalzer)