Gods and Demons Wiki
Register
Don't have an account?
Sign In
Advertisement
in: Beings, Aeon, Abrahamic,
and 17 more

Barbelo is the Aeon of impenetrability, stasis and ineffability and refers to the wife of God in several forms of Gnostic cosmogony.

Barbelo is often depicted as a supreme female principle, the single passive antecedent of creation in its manifoldness. This figure is also variously referred to as 'Mother-Father' (hinting at her apparent androgyny), 'First Human Being', 'The Triple Androgynous Name', or 'Eternal Aeon'. After God, she’s the foremost inhabitant of the Pleroma, the Gnostic name for Heaven. God didn’t create Barbelo; instead, she came into existence as an opposite in appearance to God.

God the Father, Barbelo the Mother, and Christ the Son form a three-member divine family. The Gnostics thought of this as the divine model of which all earthly families are an imperfect, corrupted reflection.

If that heavenly family sounds a lot like the Trinity of the Father, Son, and Holy Spirit, that’s probably no coincidence. To be sure, the idea that Barbelo, the divine mother of Christ, is identical to the Holy Spirit is seldom. We should therefore be careful about categorically claiming that this was a view held by all or even most Gnostics. But the extant Gnostic texts certainly seem to assume such a view in their mentions of Barbelo, such that we can indeed tentatively ascribe that view to most if not all of the Gnostics.

Barbelo is portrayed as the mother of Jesus Christ. Barbelo is described as "the first power, the glory, Barbelo, the perfect glory in the aeons, the glory of the revelation". All subsequent acts of creation within the divine sphere (save, crucially, that of the lowest Aeon Sophia) occurs through her co-action with God.

As an ineffable primordial entity that exists before Creation, whose true form (if any) transcends comprehension, Barbelo must use physical forms in lesser planes of existence. She always appears to the Archons in a beautiful form, that by beguiling them she might gather up her own scattered power. Other times, however, she will change her appearance depending on her mood. Their appearance in Heaven is usually hermaphrodite, which has made them known as "Father-Mother" or "Triple Androgynous".

During Yeshua's baptism, Barbelo manifested as a white dove, similar to God who manifested as the Holy Dove through the Holy Spirit. It can be said that the pair of pigeons was literally representing the divine couple present at the baptism of Their Son.

When through an avatar, Barbelo manifests as a being of both genders, possessing both male and female characteristics, but at an extraordinarily high level of beauty, that is, supernatural. In their physical form, Barbelo has a white face, white hair, and a thin body, with a delicate face described by John as a man and woman face. In this form, the goddess of creation looks like their alter ego, God, with their Voice and light being so powerful that one would easily mistake Barbelo for the Christian God.

Barbelo is often inactive in earthly affairs, as God is always in control of the situation, she then only intrudes when needed. Whenever humanity is in danger or heading towards chaos, she will always send a Messiah to guide humanity from darkness to light. Like the time she (along with God) sent her son beloved, Jesus Christ, to rid mankind of Satan and Yaldabaoth, and bring Sophia back to the Pleroma. Despite this, most of the time, she prefers to sleep for countless years until they need her help. Your sleep is not a literal "sleep", she just distributes its essence throughout creation in a state of omnipresence, without emotions, desires, wants or words, existing as a concept, still and quiet, in total silence.

Barbelo is one of the most powerful beings in creation, his powers being extraordinarily greater than those of Yaldabaoth, Satan and Beast, seeing them as nothing more than mere rats. She is more powerful than all aeons, including her Firstborn, who she claims can destroy Beast with a mere word. As a Pre-existential entity that embodies ineffability and impenetrability, Barbelo's power is so great that calling her "powerful" would be an understatement.

In the beginning there was nothing. An infinite nothing, and the universe was ravaged and empty. There were only chaotic oceans covering the void, and darkness covering the Abyss, and then God came into being. When God looked at his reflection in the Aquatic Abyss an entity appeared that was Sige, and Sige seeing the beauty of his co-being walked out of the waters towards God, when Sige came out of the waters a shadow was left by her, a shadow that would come to be called Therion. Both Sige and Therion are considered Gods equal and opposite, being opposite in appearance and gender.

The role of the Goddess of Creation is unknown during the primeval war, all that is known is that she was God's helper during the war, having always been by his side. After defeating the agents of chaos and imprisoning them, the Lord breathed into the abyss and said "let there be light" and there was light. And as the universe expanded, new worlds were created, including the Heaven that was found by God and he decided to make that place his home. God then named Sige of Barbelo, and they both got married and had a son, the personification of the Word, the firstborn of creation, the Autogenes, God proud when contemplating his son said: Thou art my Son; this day have I begotten thee. Barbelo then decided to create a new species of beings, the aeons, and when she did, they praised the Invisible Father, saying: "It is because of you that everything exists and everything will return to you. I will praise and glorify you and the Autogenes and to the three aeons: the Father, the Mother and the Son, the perfect power."

So prominent was her place amongst some Gnostics that some schools were designated as Barbeliotae, Barbelo worshippers or Barbēlōgnostics.

In some Gnostic texts, God’s inexhaustible profusion of thought overflows, and a new being, Barbelo, emerges from that intellectual flood. Elsewhere, it’s said that Barbelo arose when God stared down into the primal waters and saw his luminous reflection, which then became a new being.

We don’t know what the name “Barbelo” means, but it might be related to the Coptic verb berber, “to overflow” or “to boil over.” That connection would be fitting in light of Barbelo having been born from the overflowing thought of God in some Gnostic scriptures.

The word for “spirit” in Hebrew and other Semitic languages is feminine, so to the ears of people who spoke those languages, the name “Holy Spirit” would have almost automatically connoted a feminine being. This seems to be a conception that was actively cultivated in at least some early Christian circles. For example, the Jewish Christian Gospel of the Hebrews has Jesus refer to the Holy Spirit as his mother.

The same view is attested in Gnostic literature, too. In the words of the Valentinian Gnostic Gospel of Philip, “Some said Mary became pregnant by the Holy Spirit. They are wrong and do not know what they are saying. When did a woman ever get pregnant by a woman?”

In the Pistis Sophia Barbelo is named often, but her place is not clearly defined. She is one of the gods, "a great power of the Invisible God", joined with Him and the three "Thrice-powerful deities", the mother of Pistis Sophilight" or heavenly body; the earth apparently is the "matter kishan choure of Barbēlō" or the "place of Barbēlō".

She is obscurely described by Irenaeus as "a never-aging aeon in a virginal spirit", to whom, according to certain "Gnostici", the Innominable Father wished to manifest Himself, and who, when four successive beings, whose names express thought and life, had come forth from Him, was quickened with joy at the sight, and herself gave birth to three (or four) other like beings.

She is noticed in several neighboring passages of Epiphanius, who in part must be following the Compendium of Hippolytus, as is shown by comparison with Philaster , but also speaks from personal knowledge of the Ophitic sects specially called "Gnostici". The first passage is in the article on the Nicolaitans, but is apparently an anticipatory reference to their alleged descendants the "Gnostici". According to their view Barbelo lives "above in the eighth heaven"; she had been 'put forth' "of the Father"; she was mother of Yaldabaoth (some said, of Sabaoth), who insolently took possession of the seventh heaven, and proclaimed himself to be the only God; and when she heard this word she lamented.

Others, Epiphanius further seems to say, told a similar tale of Prunikos, substituting Caulacau for Yaldabaoth. In his next article, on the "Gnostici", or Borborites, the idea of the recovery of the scattered powers of Barbelo recurs as set forth in an apocryphal Book of Noria, Noah's legendary wife.

In a third passage, enumerating the Archons said to have their seat in each heaven, Epiphanius mentions as the inhabitants of the eighth or highest heaven "her who is called Barbēlō", and the self-gendered Father and Lord of all things, and the virgin-born Christ (evidently as her son, for according to Irenaeus her first progeny, "the Light", was called Christ); and similarly he tells how the ascent of souls through the different heavens terminated in the upper region, "where Barbēro or Barbēlō is, the Mother of the Living".

Theodoret merely paraphrases Irenaeus, with a few words from Epiphanius. Jerome several times includes Barbelo in lists of portentous names current in Spanish heresy, that is, among Priscillianists; Balsamus and Leusibora being three times associated with it.

Babel, in the book of "Baruch" of the Gnostic Justin, the name of the first of the twelve "maternal angels" born to Elohim and Edem. She is identical with Aphrodite, and is enjoined by her 'mother' to cause adulteries and desertions among men, in revenge for Edem's desertion by Elohim. When Heracles is sent by Elohim as "a prophet of the uncircumcision" to overcome "the twelve evil angels of the creation," i. e. the maternal angels, Babel, now identical with Omphale, beguiles and enfeebles him. She may possibly be the Baalti or female Baal of various Semitic nations, though the intrusive β is not easily explained. But it is on the whole possible to take Babel, "confusion", as a form of Barbelo, which may have the same meaning. The eclecticism of Justin would account for his deposition of Barbelo from the first to the second place, where she is still above Hachamoth.

Barbelo is found in other Nag Hammadi writings: 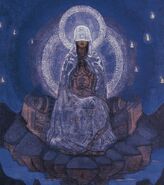 The Mother of the World (Art by Nicholas Roerich)