Gods and Demons Wiki
Register
Don't have an account?
Sign In
Advertisement
in: Beings, Tulpa, Mythology,
and 3 more

Born from the minds of Humanity, and Dream

The Bogeyman is a powerful and legendary Tulpa that was made by people's nature to fear the unknown. Originally born as an imaginary being used by adults to scare children into behaving. It has no specific appearance and conception of it can vary drastically from household to household within the same community.

The Bogeyman himself is a formless being that can take any shape the storyteller wishes though he tends to be a grotesque humanoid with a tendency to hide under beds, in closets and other dark places. He is said to be the leader of the nightmare-inducing entities known as the Dream Devils (not connection with demonkind) which are opposed by the Sandmen and the Dream Spirits, dream-inducing entities.

In many cases, he has no set appearance in the minds of adults or children, but is simply a non-existing embodiment of terror. Some parents will tell their children that if they misbehave then the bogeyman will get them. His punishments are said to vary from mischievous pranks such as pulling hair, biting toes or shaking beds (akin to a poltergeist) or more malevolent behavior such as manifesting as horrible creatures to scare the child or even going as far as kidnapping the child and taking them away to his shadowy realm to an undisclosed fate; though he is often said to eat them.

This creature varies from person to person, as it has no definite appearance and is simply the embodiment of terror. Although usually depicted as a masculine entity, it can be female or genderless.

While the description of the Bogeyman differs on a cultural level, there are often some shared similarities to the creatures. The Bogeyman is depicted as having claws, talons, and sharp teeth. Along with that, the Bogeyman is of the spirit variety, while the minority are demons, witches, and other legendary creatures. Some are even described to have certain animal features such as horns, hooves, and bug like appearances.

One of the Bogeyman's appearances is a tall, lithe, and dark humanoid entity. He has silver-golden yellow eyes resembling an eclipse, dull pale-gray skin, and glossy black hair that is styled to come out as slick, sharp spikes from the back of his head. He wears a long, black robe with a V-neck line and shadows running down his arms, obscuring his body like a shadow.

Another appearance is a round puppet, with stumpy legs and fingerless arms, covered from head to toe in a brown-grey or neon green burlap sack (depending on the lighting), and obvious seams are visible along the sides. The "eyes" on its face are featureless black holes, as is the inside of his mouth. The tip of his head extends outward and flops down, vaguely resembling a Santa hat. On the inside of the sack, Oogie is a huge mass of a variety of different colored bugs and snakes.

When looking at the personality traits of the Bogeyman, they are most easily divided into three categories; the kind that punishes misbehaved children, the kind that are more prone to violence, and the kind that protect the innocent. They all relate in the same way, being that they all exist to teach young children lessons. The large majority of Bogeyman are there to just frighten children with punishments, and not actually inflict much damage. The more vicious Bogeyman is said to steal the children at night, and even eat them. The last category is the Bogeyman who protect people and only punish those guilty, regardless of age.

The Bogeyman is everything a person fears, and it thrives on the fear of others, taking a cruel delight in turning their pleasant dreams into nightmares. Being a master manipulator, the Bogeyman often preyed on its victims psychologically. Its knowledge of people's worst fears allowed it to unnerve its enemies and enjoyed watching them squirm, often leaving their fates to their imagination through thinly-veiled threats before finishing them off. The Bogeyman has a perverse level of pleasure from playfully tormenting with its victims in an almost animal-like fashion.

The Bogeyman is one of the strongest Tulpas to ever exist, personifying the fear of the dark, of the strange, of the unknown. He has many interesting powers and abilities that somewhat vary with his different moods and appearances.

Because of such a global impact, it makes it difficult to find the original source of the legends. The first reference to the Bogeyman would be considered the hobgoblins described in England, in the 1500's. Many believed that they were made to torment humans, and while some only played simple pranks, others were more foul in nature.

Bogeyman-like beings are almost universal, common to the folklore of many countries. All of these have a similar concept, a mysterious being who punishes kids for being naughty.

Bogeymen may target a specific mischief such as one that punishes children who suck their thumbs or misbehavior in general. In some cases the bogeyman is a nickname for the Devil. The Bogeyman is related to many similar beings, who, together, form an entire villain type in themselves. However, he is definitely the most infamous of them all and is especially prominent in Western cultures. Even to this day some people will use the Bogeyman to scare children into good behavior, though it is becoming less popular due to negative effects it can bring to some children.

The Bogeyman may be called "Boogerman" or "Boogermonster" in rural areas of the American South ("booger" being the American English equivalent of the British English "bogey"), and was most often used to keep young children from playing outside past dark, or wandering off in the forest. During the Corn Festival, young Cherokee males wearing caricature masks would make fun of politicians, frighten children into being good, and shake their masks at young women and chase them around. Male participants in this "Booger Dance" were referred to as the "Booger Men". In some Midwestern states, the boogeyman scratches at the window. In Eastern Iowa he is called the Korn Stalker In the Pacific Northwest, he may manifest in "green fog". In other places he hides or appears from under the bed or in the closet and tickles children when they go to sleep at night, while in others he is a tall figure in a black hooded cloak who puts children in a sack. It is said that a wart can be transmitted to someone by the boogeyman.

The word bogey is believed to be derived from the Middle English bogge / bugge ("something frightening", "scarecrow"). Theories on its origin include a root meaning "goat", or a cognate of the German bögge, böggel-mann ("goblin"). It could be influenced in meaning by Old English -budda used in compounds for "beetle". A related word, bugbear, from bug, meaning goblin or scarecrow, and bear, was imagined as a demon in the form of a bear that eats small children, and was also used to mean a general object of dread. The word bugaboo, with a similar pair of meanings, may have arisen as an alteration of bugbear.

In Southeast Asia, the term is popularly supposed to refer to Bugis or Buganese pirates, ruthless seafarers of southern Sulawesi, Indonesia's third-largest island. These pirates often plagued early English and Dutch trading ships of the British East India Company and Dutch East India Company. It is popularly believed that this resulted in the European sailors bringing their fear of the "bugi men" back to their home countries. However, etymologists disagree with this, because words relating to bogeyman were in common use centuries before European colonization of Southeast Asia.

In Luo dialects in Eastern Africa the term 'bwogo' (with pronunciation sound like 'booga') means to scare. This correlation is most likely spurious as Nilotic language roots predate the modern concept of civilization itself.

The Bogeyman watching from a hallway (Art from The Boogeyman) 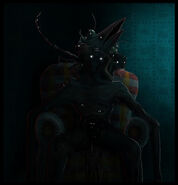 Bogeyman in his realm (Art by Xiperius)

Boyegman appearing to take the children (Art by Francisco Goya) 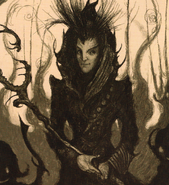 The Bogeyman in books (Art from The Guardians of Childhood)

Bogeyman with Fear Constructs (Art from Rise of the Guardians)