Gods and Demons Wiki
Register
Don't have an account?
Sign In
Advertisement
in: Articles that need art credits, Beings, Fairy,
and 4 more

The Caipora is an entity or a fairy-creature of Tupi-Guarani mythology.

The word "Caipora" comes from tupi and means "inhabitant of the forest".

In some regions, the indigenous tribes believed that the Caipora was afraid of the light. For this reason, they would walk around the forest protecting themselves using firebrands. Some say it rides a great peccary holding a stick. In some other areas of Brazil, the Caipora is considered to be a cannibal and would eat anything, even the smallest insects.

The Caipora is known as a forest dweller, as a king of the animals of sorts, and is very vengeful of hunters who do not respect the rules of "fair-play" when hunting. It is told that it scares away prey and "hides" animal tracks or makes hunters lose their way in the jungle. It disorients the hunters by simulating animal noises and by leaving fake tracks.

It is represented as a dark-skinned, small Native American, naked with a very long red mane, smoking a cigar and very mischievous. Sometimes Caipora is depicted as a girl and other times as a boy. The representation of the creature varies among the different regions of Brazil. Curupira is often depicted as a boy with red hair, who has his feet turned backwards in order to deceive trackers.

It is sometimes confused with Curupira, which is another mythological creature who protects the forest

According to a popular belief, its activity intensifies on those days in which hunting is not supposed to take place, therefore on Fridays, Sundays and the religious days. Religious beliefs prohibited hunting on certain days, but there are claims about ways to trick the protector of the forest. It is known that the Caipora likes smoke, so on Thursday nights, the hunters would leave smoke by the trunk of a tree and say "Toma, Caipora, deixa eu ir embora" (which means "Here you go, Caipora, let me leave" in Portuguese). The good luck of hunters is also due to the propitiatory gifts that were offered to the creature. 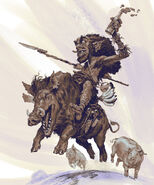