Gods and Demons Wiki
Register
Don't have an account?
Sign In
Advertisement
in: Beings, Urban legends, Human,
and 4 more

Cassidy Stevens is one of the various people killed by David Jerimoth.

After becoming a possessed machine, Cassidy became an incredibly rageful spirit. While not as animalistic as her fellow murder victims, she still has an axe to grind regarding her killer. While she seems fine around other kids she is apathetic or even violent towards adults, especially those that are either employees or look like David.

In the year 1995, Cassidy alongside four other children were murdered by David Jerimoth inside a Chuck E. Cheese restaurant. To hide the evidence, Dave hid there bodies inside the pizzeria animatronics, with Cassidy's corpse hidden inside the main animatronic Chuck E. Cheese, making the soul and machine one.

After realizing the machines became alive due to his mistakes, David Jerimoth went inside the restaurant and destroyed the animatronics out of fear of them coming after him, including Cassidy's. This inadvertently released the spirits from their tombs, allowing them to haunt him further. This eventually led to David taking his own life, all of this was covered up by Chuck E. Cheese Inc. and used as an excuse to no longer use animatronics. Cassidy's animatronic was abandoned inside a landfill.

While the other spirits were at peace, Cassidy wasn't. Cassidy kept David's soul in a personal hell created just for him, where she would torture him endlessly. Claire Bonham came to her and invited her to a party, their one happy day. Cassidy along with all of the other children taken by David came together, and eventually found peace in knowing that whatever happens to David, they will be fine. They realized that he no longer mattered, they finally let themselves die and finally reach the heavens.

The animatronic before its dismantling

A warning for nighttime employees 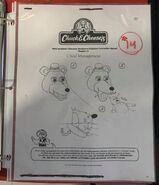 From a chapter on "child management" in a instruction booklet