Gods and Demons Wiki
Register
Don't have an account?
Sign In
Advertisement
in: Beings, Greek, Roman,
and 5 more

Chronos is the Primordial God and the second personification of time and space while also being the 2nd-in-Command of the Protogenoi, the Greco-Roman Primordials. His wife is Ananke, the primordial goddess of inevitability, compulsion, and necessity.

Chronos is the first creation of Khaos and the husband of Ananke and her Roman counterpart Necessitas. He is said to be the personification of time and eternity and the lord of the Zodiac. Chronos was confused with, or perhaps consciously identified with, the Titan Cronus in antiquity due to the similarity in names.

His name means the word "time". He is the student and will later on be the successor of Father Time.

He was initially portrayed to possess an incorporeal figure as a serpent with three heads; one of a man, the second of a bull, and the last of a lion Chronos is also portrayed as an old, wise man with a long, grey beard, similar to his mentor Father Time. Chronos is also a God of Death along with being a guide to the afterlife. His connection with Death, had accidentally had many beings mistaken each identity with the other.

He was depicted in Greco-Roman mosaics as a man turning the Zodiac Wheel.

As the primordial personification of time, Chronos is a very serious entity for the sake of the multiverse. He is very adamant about his purpose of protecting the flow of time and will do anything to fulfill that purpose. However, according to some of his siblings such as Ananke, Chronos can be quite laid back almost bordering laziness and can be very relaxed, and can also be a very loving older brother.

While mainly acting indifferent and detached from creation and mankind, if provoked enough, can and has been seen to become very enraged towards creation, mankind and other species, such as demons, dragons, angels, fallen angels and Gods alike. When concerning Ananke and humans that he is fond of, he is shown to treat them with love kindness and even protectiveness, even if they are in Hell, Sheol, facing Archdemons and even other creatures.

However, despite all of that, Chronos is known only by select primordial's to be hanging around mankind very often, with him also sometimes even intervening in some human lives and even sometimes blessing curtains humans he finds amusing and gets along with.

As the second-in-command of the Protogenoi, Chronos is unbelievably powerful primordial surpassing all his fellow creations of Khaos among the other pantheons. Being the personification of time and successor of Father Time, he proved to be among the most powerful entities in the entire multiverse capable of rivalling the likes of Calur and Yog-Sothoth.

If he knows who or when the eternal clock was wound, Chronos does not tell, but upon the first stroke, he came to be. Emptiness was the ocean, then, and his only companion was Ananke, Queen of Fate. Together, their powers divided the vastness into heaven and earth and sea and sky. Thereafter, Chronos became an observer, the watchman of infinity.

In the Orphic cosmogony, the unaging Chronos produced Aether and Khaos, and made a silvery egg in the divine Aether. It produced the hermaphroditic god Phanes who gave birth to the first generation of gods and is the ultimate creator of the cosmos.

Pherecydes of Syros in his lost Heptamychos ("the seven recesses"), around 6th century BC, claimed that there were three eternal principles: Chronos, Zas (Zeus) and Chthonie (the chthonic). The semen of Chronos was placed in the recesses of the Earth and produced the first generation of gods.

Chronos already was confused with, or perhaps consciously identified with, the Titan Cronus in antiquity due to the similarity in names. The identification became more widespread during the Renaissance, giving rise to the allegory of "Father Time" wielding the harvesting scythe. 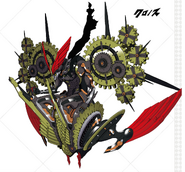 Chronos as the Clockward God (Art from Persona Q)