Gods and Demons Wiki
Register
Don't have an account?
Sign In
Advertisement
in: Items, God, Mythology,
and 3 more

The Cosmic Egg is a motif found in the creation myths of many cultures and civilizations throughout the world.

Typically, the cosmic egg is described as a beginning of some sort, and the universe or some primordial being comes into existence by "hatching" from the egg, sometimes lain on the primordial waters of the world. The Cosmic Egg is a metaphor of potentiality. It is the pre-creation held within chaos, waiting to become the cosmos. This duality, then, sets up a conflict found throughout world mythology, the duality of chaos and order, good and evil, light and dark, love and hate.

Some depictions makes it that cosmic egg is said to contain an unborn universe, which takes millions or billions of years to develop as a whole. The cosmic egg is made of up of the purest form of creation and life, enough to where it is believed to contain the essence of God. In fact, many have attempted to acquire the egg in order to attain omnipotent power. It is also shown that cosmic eggs divide from a branch universe, a branch of the Tree of Life which is its own coursing flow of time and space, undergoing a form of what is dubbed as "meiosis" where the yet-to-be-born universe develops much like how diploid cells undergo DNA replication.

This process is also applied to Primordial beings as it is believed that the egg contains an unborn Primordial being. This shows that the Primordials can simply procreate by acquiring the necessary equation of life in order to create a new Primordial. The egg can contain even more than one Primordial. Upon full development and maturity within the egg, the parent Primordial sends the egg off, where it will soon hatch and eventually allow the newly born Primordials to roam free and become aspects of that particular universe itself when they finish its design.

Eggs symbolize the unification of two complementary principles (represented by the egg white and the yolk) from which life or existence, in its most fundamental philosophical sense, emerges. The idea of a cosmic egg was brought up by science in the 1930s, where the universe was believed to have originated from a gravitational singularity and expanded via a big bang to become the expanding universe.

In the beginning, there was nothing, no earth, no matter, no wind, no life, no death, no time, not even void. But all of a sudden, from that nothing, came an egg, it is unknown whether it was an actual egg or just a metaphorical being called an egg, no one would be faulted for thinking that being or "egg" was the supreme being, even if only for that moment.

But eventually this egg hatched, and from that hatching came two of the most powerful beings within the multiverse; Ouroboros, the pre-existential embodiment of endlessness and infinity, and Vitriol, the pre-existential embodiment of hunger and oblivion. This made the once plane of non existence into something, with God and other creator deities creating more and more until the universe as we know now exists.

One of the earliest known references to the cosmic egg is in Ancient Greek times, which was known as the Orphic Egg. The Orphic Egg in the Ancient Greek Orphic tradition is the cosmic egg from which hatched the primordial hermaphroditic deity Phanes/Protogonus (variously equated also with Zeus, Pan, Metis, Eros, Erikepaios and Bromius) who in turn created the other gods. The egg is often depicted with a serpent wound around it.

Within this egg typically resides a divine being who literally creates himself from nothing (AKA The ex nihilo). This creator then goes on to form the material universe. This ‘ex nihilo’ creator either uses the material within the cosmic egg shell, or the substance of chaos to bring shape and order to the world. The tricky question is however, what came first, the god or the egg. In some myths, this egg has a maker, often a woman, who brings the creator god into existence.

In the Pelasgian myth of creation, Eurynome (a version of the Greek Gaia) lays the world egg on the waters of chaos and orders a cosmic snake Ophion to encircle it until it hatched the world itself. The Greeks had their own Cosmic Egg called the Orphic Egg, which was warmed by a snake until the first Deity known as the Protogonus hatched from it. The later Orphic cult in Greece preached that in the beginning there was a silver cosmic egg, created by Time that hatched the androgynous being who contained the seeds of creation.

Phanes was believed to have been hatched from the World-Egg of Chronos (Time) and Ananke (Necessity). His older sister Nyx (Night) called him Protogenus. As she created nighttime, he created daytime. He also created the method of creation by mingling. He was made the ruler of the deities and passed the scepter to Nyx. This new Orphic tradition states that Nyx later gave the scepter to her son Ouranos before it passed to Cronus and then to Zeus, who retained it.

In the Finnish creation epic, the Kalevala, the world is created from the fragments of an egg laid by a duck on the knee of Ilmatar, the primordial sea goddess. The bird laid six golden eggs and one iron one. When Ilmatar moved her leg, the eggs fell into the sea and broke, the pieces becoming land, sky, stars, and sun.

In Zoroastrian tradition, Ohrmazd (the almighty god) created the world from chaos. He gathered the turbulent material and formed it into a great egg. From the upper part of its shell he formed the sky, and from the lower half he forged the earth. He then filled the lower part of the shell with primeval waters and set a flat earthen disk on top of it.

In Slavic mythology, Rod, the supreme being, created a divine egg from the void, inside of which rested Svarog, god of fire. As his life force grew, the egg cracked open. The lower shell became the earth and sea, out of which a grew a world tree, pushing the upper shell skyward, creating the firmament.

One Chinese creation myth describes a huge primordial egg containing the primal being Pangu. The egg broke and Pangu then separated chaos into the many opposites of the yin and the yang, that is, into creation itself.

The Polynesian Tahitians have a myth in which the god Ta’aroa began existence in an egg and eventually broke out to make part of the egg the sky. Ta’aroa, himself, became the earth.

The earliest records of one such egg is the Brahmanda from Hinduism. There is a story primordial maternal waters of the pre-creation, which desired to reproduce. Through a series of prolonged rituals, the waters became so hot that they gave birth to a golden egg. Eventually, the creator, Prajapati, emerged from the egg and creation took place.

In Africa, a Dogon myth says that in the beginning, a world egg divided into two birth sacs, containing sets of twins fathered by the creator god, Amma, on the maternal egg. Some say that Amma was the cosmic egg and fertilized himself.

In Japanese mythology, creation begins with the world as a chaotic, formless mass. Then an indefinable sound filled the void, setting the particles in motion which form into an egg. The lighter particles rose upward forming Heaven, while the heavier particles coalesced into a heavy, dense mass and became the Earth.

In Bantu Mythology, the earth was said to have derived from an egg. The upper half of the shell became heaven, including the god on high who presided over it, while the lower coalesced into the earth and its primordial mother. From both halves developed the sun, stars, trees and animals.

In Celtic myths, the goddess Ilmatar sat in the sea and stretched out her leg for an eagle to land on her, because it was clear that the eagle was looking for a place to nest and lay eggs. The eagle descended on Ilmatar's leg and laid the cosmic eggs on the goddess's leg. However, the virgin goddess ended up dropping the eggs, and as the eggs fell, they formed the world as we know it; The broken shells of the eggs formed the heavens and the earth; the yolks became the sun, and the chalaza became the moon; and the fragments of the eggs became the stars. 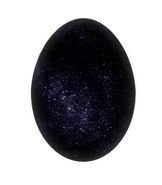 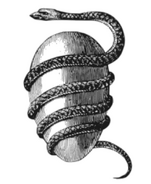