Cronus is the king of the Titans of the Greek Pantheon and ruler of the Mount Othrys.

He is the youngest of the first generation of Titans, the divine children of Ouranos, the sky, and Gaia, the earth. He overthrew his father and ruled during the mythological Golden Age, until he was overthrown by his own son Zeus and imprisoned in Tartarus. He was known as the Titan of the Harvest.

Cronus is usually described as a tall, powerful man, blessed with well proportionate features and covered in dark robes. He is almost always depicted with a harpe or a scythe, which is the tool he used to mutilate his lusty sire, Ouranos, and sometimes holding a snake biting it's own tail, a symbol of eternity.

Alternatively, He appears as a haggard old man with a beard and a wicked expression. In most of his depictions, he possess bright golden eyes.

In his human form, Cronus takes the form of a very thin boy with dark skin, dull red eyes and dark purple hair with four long, flowing strands. As an outfit, he wears a long dark purple overcoat and over the outfit, he wears a double necklace with two glittering stones and a belt of silver buckles at the waist. In this state, his countenance is completely stoic and emotionless. However, when he uses all his power, Cronus' hair turns completely black, his face takes on an evil and manic countenance while black rings appear around his eyes that glow and gain black pupils.

Cronus is malevolent, ruthless, power hungry, sadistic, and extremely arrogant. He quickly agrees to his mother's proposal of castrating his own father. He was the most devious and violent of his twelve siblings, and none questioned his authority when he seized the throne after Ouranos' death. He loved his throne over his children, and swallowed them in order to thwart the prophecy of son beating the father. He was also extremely paranoid and reckless, believing Ouranos' prophecy and not taking appropriate measure or thinking properly over this matter. He was also hostile towards his Cyclopes and Hundred Handed brothers.

However, he is shown to have an honorable side as well. He kept his promise to his four brothers and gave them control of the four directions: He respected and loved his brothers and sisters, and was especially close to his four brothers: Hyperion, Iapetus, Crius and Coeus, which all helped him in the castration of his father. He held his mother in high regard and was shown to be loving towards his sister wife Rhea, not wishing her harm in any way.

As the Titan King, Cronus is unimaginably powerful, with Zeus requiring the created Master Bolt from the Elder Cyclopes in order to defeat Cronus. His cannibalistic nature towards his children earned Cronus the nickname 'All-Devouring'.

He was only subdued by the combined efforts of Zeus, Poseidon and Hades, Where he was old and had lost much of his power and luster whereas the Gods were young and energetic. After being revived and returning to a younger form, his power had multiplied greatly and far surpassed his pervious self in everything. He is even more powerful than his younger half-brother Typhon.

However, his power has also limits, and so there are still beings that can rival or possibly surpasses him in some way. A prime example of these beings is Satan the Imperial King of Inferno. During the time when Cronus tried to conquer the Abrahamic Netherworld, Satan confronts him, and the two fight in a vicious battle. Satan battled Cronus, who is known as the strongest Titan, when he tried to overtake Hell, but is still overpowered by the nigh-omnipotent Archdemon and was force out of Hell.

Cronus envied the power of his father, the ruler of the universe, Ouranos. Ouranos drew the enmity of Cronus's mother, Gaia, when he imprisoned the gigantic children of Gaia, the hundred-handed Hecatonchires and one-eyed Cyclops, in Tartarus, so that they would not see the light. Gaia created a great divine sickle which would later on be known as Cronus' sickle and gathered together Cronus and his brothers to persuade them to castrate Ouranos.

Only Cronus was willing to do the deed, so Gaia gave him the sickle and placed him in ambush. When Ouranos met with Gaia, Cronus attacked him with the sickle, castrating him and casting his testicles into the sea. From the blood that spilled out from Ouranos and fell upon the earth, the Giants, Erinyes, and Meliae were produced. The testicles produced a white foam from which the goddess Aphrodite emerged.

For this, Ouranos threatened vengeance for overstepping their boundaries and daring to commit such an act. Ouranos had also cursed Cronus, stating that his child would come to overthrow him, just as he had done to him.

After dispatching Ouranos, Cronus re-imprisoned the Hecatonchires, and the Cyclopes and set the dragon Campe to guard them. He and his sister Rhea took the throne of the world as king and queen. The period in which Cronus ruled was called the Golden Age, as the people of the time had no need for laws or rules; everyone did the right thing, and immorality was absent.

However, when he married and bore children with Rhea, he learned from Gaia that he was destined to one day be overthrown by his own children. Since Cronus feared that one of his children would be his downfall, as he was that of his father before him, he decided that whenever one of his children was born, he would swallow it. This led him to swallowing his first five children: Hestia, Demeter, Hera, Hades and Poseidon which gave him the title of The Crooked One and King Cannibal.

Rhea could not stand another one of her children to be devoured until she was informed by Gaia to hide her final child (Zeus) in a cave, and replace him with a stone. Cronus blindly swallowed the stone, but gave him a painful stomach ache.

Zeus grew up, and plotted against his father by slicing his stomach open and freeing his older siblings. Then frees the Cyclopes and Hecatonchires from Tartarus, gets aid from one of the Titans named Themis and her son Prometheus, and engages Cronus and the the rest of the Titans in the Titanomachy for ten years. Zeus defeats Cronus with a lightning bolt made by the Cyclopes as a show of gratitude. Zeus takes his Bronze Scythe and literally chops his father to pieces before casting them with the other Titans to Tartarus.

There are various myths regarding Cronus apart from his role in The castration of Ouranos and the Titanomachy, mostly regarding his fate after the war.

Many believe he was also subdued by the gods, chained and thrown into Tartarus along with all his Titan siblings, Whilst others say He was cut into a thousand pieces by Zeus using his own scythe, the same fate suffered by Ouranos.

Others however, offer The Titan Lord a kinder fate: It was said That Cronus was eventually freed by Zeus along with his siblings and was made the King of the Isles of the Blessed, The underworld Paradise. Some others say that he escaped to Rome where he ruled wisely and taught his subjects the art of agriculture. The feast, Saturnalia, is held annually in honor of the Titan King Cronus. 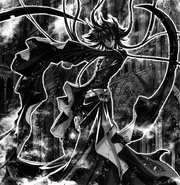