Gods and Demons Wiki
Register
Don't have an account?
Sign In
Advertisement
in: Races, Mythology, Greek,
and 2 more

A Daemon is a lesser divine spirit, often personifications of abstract concepts, that are of the same nature as both mortals and deities but was apart of neither.

Daemons, whose name means "godlike" or "divider", are sometimes known as "lesser deities" and are found within various mythologies, usually in in ancient Greece. A daemon is not so much a type of quasi-divine being, but rather a non-personified "peculiar mode" of their activity. One tradition of Greek thought, which found agreement in the mind of Plato, was of a daemon which existed within a person from their birth, and that each individual was obtained by a singular daemon prior to their birth by way of lot.

In Hesiod's Theogony, Phaëton becomes an incorporeal daemon or a divine spirit, but, for example, the ills released by Pandora are deadly deities, keres, not daemones. From Hesiod also, the people of the Golden Age were transformed into daemons by the will of Zeus, to serve mortals benevolently as their guardian spirits that remain invisible, known only by their actions. During the East Roman Empire, Christians saw the statues of Daimon as part of the paganism and began using the word to denote any evil supernatural being.

In the Old Testament, evil spirits appear in the book of Judges and in Kings. In the Septuagint, made for the Greek-speaking Jews of Alexandria, the Greek ángelos (ἄγγελος "messenger") translates the Hebrew word mal'ak, while daimónion (δαιμόνιον; pl. daimónia (δαιμόνια)), which carries the meaning of a natural spirit that is less than divine (see supernatural), translates the Hebrew word shedim as well as the word se'irim in some verses and words for idols and foreign deities, and describes the being Asmodeus in the Book of Tobit. This usage was made into the Old and New Testaments and lent to the English word "demon." 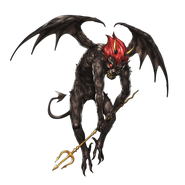 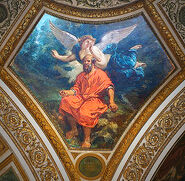 Socrates and his Daemon (Art by Eugène Delacroix)