A Deity is a being with powers far greater than those of humans, demons, monsters, and most angels, but who interacts with humans, positively or negatively, in ways that carry humans to new levels of consciousness beyond the grounded preoccupations of ordinary life.

Deities all descend from Khaos, the primordial void and rival of God. They are also the descendants the Primordials, the first gods in existence, and the direct children of Khaos, along with being the ones that helped shape the very fabric of all creation itself while embodying the aspects of latter. The deities, whom are regarded as either a second generation of primordials or third depending on the sources, are tasked with maintaining the balance of the natural order and represent the natural forces of the Earth and beyond as well.

Deities are depicted in a variety of forms, but are also frequently expressed as having human form. Some faiths and traditions consider it blasphemous to imagine or depict the deity as having any concrete form. They embody or personify concepts, actions, animals, emotions, elements, and much more which is all the more reason why they are so essential and important in maintaining the balance of the universe.

Various cultures have conceptualized a deity differently than a monotheistic God. A deity need not be omnipotent, omnipresent, omniscient, omnibenevolent, eternal. A monotheistic God is almighty, omnipresent, omniscient, omnibenevolent and eternal. Monotheistic religions typically refer to God in masculine terms, while other religions refer to their deities in a variety of ways such as masculine, feminine, androgynous and gender neutral.

Deities are often thought to be immortal, and are commonly assumed to have personalities and to possess consciousness, intellects, desires, and emotions comparable but usually superior to those of humans. A male deity is a god, while a female deity is a goddess. They were thought to be able to work supernatural miracles and to be the authorities and controllers of various aspects of human life (such as birth or an afterlife). Despite their immortality, some gods can die and be incapacitated but they cannot truly perish and instead reincarnate. Whenever a god perishes, they go through a cycle of reincarnation and are then revived into their "true" forms within the "space beyond space" due to the fact that they are fundamental mythical aspects of reality and thus could never truly be killed. (With the exception of erasement which can could wipe them from existence; however their role would still need to be filled to maintain universal balance).

Some deities were asserted to be the directors of time and fate itself, the givers of human law and morality, the ultimate judges of human worth and behavior, or designers of the Universe, instead of being a natural result of the laws of physics. The boundary between human and divine in most cultures is by no means absolute. Demigods are the offspring from a union of a human with a deity, and most royal houses in Antiquity claimed divine ancestors.

Some deities are thought to be invisible or inaccessible to humans, dwelling mainly in otherworldly, remote or secluded and holy places, such as the concepts of the land, the sky, the underworld, the skyland, under the sea, in the high mountains or deep forests, or in a supernatural plane or celestial sphere.

Deities are depicted in a variety of forms, but are also frequently expressed as having human form. Some faiths and traditions consider it blasphemous to imagine or depict the deity as having any concrete form. Gods that are found in many Indo-European traditions, were anthropomorphic. The Mesopotamian gods for example were often envisioned as being of tremendous physical size.

Typically, they rarely reveal or manifest themselves to humans, and make themselves known mainly through their effects. Monotheistic deities are often thought of as being omnipresent, though invisible. They can be described as abstractions, ideas, or concepts although they are commonly seen as persons. However, they can be sensed and even seen by other supernatural beings, but even though they can sometimes allow themselves to be unseen by the supernatural beings, it doesn't stop the latter from sensing them regardless.

When the universe all that it was was properly formed, God and His angels rested and left its maintenance in the hands of the Primordials. However, as time went on, some of the Primordials established a ruling of sorts over the cosmos which then led to the conception of the gods that humans have come to know in ancient mythology while other Primordials were simply concerned with the tasks given to them. When the gods of old were born by the Primordials or the Second-Generation Primordials, many of them warred against their mighty parents and relatives for the right to claim lordship over the Earth and the universe whilst others relinquished their status to their children.

Their children emerged victorious and established themselves as the new rulers of the cosmos in place of their parents and ancestors. While the status quo has changed, they left alone the Primordials that did not partake in the system change as they posed no threat and were pivotal in keeping the universe functional. Seeing this, Khaos charged the deities with sustaining as well as embodying the planet, its natural forces, its creatures, its aspects, concepts, and beyond it like the stars and solar bodies much like how God charged His angels.

The gods ruled over various sections of the planet and the universe, coexisting and sharing kingdoms with one another, albeit bitterly in certain circumstances. They also defended the planet from the threat of the Great Old Ones who attempted to take the Earth as their own with the deities emerging victorious in their wars against the Old Ones and consequently establishing a council of gods from various pantheons to discuss important matters concerning the Earth and the universe which not one pantheon can handle alone. This has also led to the gods and angels working alongside one another at times and would exchange tools, tasks, and operatives in their operations.

Historically, many ancient cultures such as Ancient Greece, Ancient Rome, Nordic culture and Asian culture associated or identified deities with natural phenomena, as their powers but not as causes. Some Avestan and Vedic deities were viewed as ethical concepts. In Indian religions, deities have been envisioned as manifesting within the temple of every living being's body, as sensory organs and mind.

The various deities of myths and legends (Art by ???) 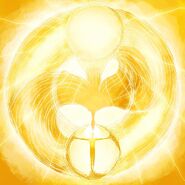