Gods and Demons Wiki
Register
Don't have an account?
Sign In
Advertisement
in: Races, Demon, Hell,
and 4 more

Demons, also known as Demonkind, are spiritual beings that inhabit in the dark realms, the most common being Hell. They are also the archenemies to the angels, the two sides seeming to be the antithesis of one another, given their very different views in pretty much everything the two species seem to be the antithesis to the other. These creatures are very common antagonists in a number of theological stories, mythologies, folklore and fiction.

Traditionally, demons were considered either fallen angels, unclean spirits or degenerated lesser gods; though the word now has evolved to refer to any malevolent spiritual entity. Demons are also widely known to be enemies of God, Jesus Christ and any one that is faithful to God. Even though it may seem like it, demons are beyond the human conception of good and evil, instead they are creatures of chaos where the strongest rule. The reason why demons seems 'evil' to humans is that demons believe themselves as above humans making them no different to angels and gods with the same mindset.

Because of their inherent beyond-human physical and mystical abilities, most known demons view themselves as superior to humans, and as such wish to rule over them. Despite this, demons can be summoned and even controlled. But the demons with strong will are capable of either shattering the control one has over them, or twist their wishes to bring him to the conjurers themselves. Depending on the rank and type of demon, they are superior to humans and rival other supernatural beasts that roam the Earth with the angels being equal to them.

It is seen that certain demons have disguised themselves as humans and gained an incredible amount of influence in the criminal underworld, the wealthy upper-class, and even close family members and business associates of powerful individuals. However, there are also demons who reject their infernal heritage and instead choose to go to the human world to live in peace and sometimes even seeks to protect mankind from their own kind, such as Sparda and Hellboy.

Demons can also be seen as metaphors for natural disasters, affliction and cruelty, the most prominent of which are the "deadly sins" of Christian tradition: demons are also used to describe inner-fears and anxieties found in the minds of all people, which is where the common expression "face one's demons" comes from.

Demons are similar to monsters in being frightening chimerical appearance. Unlike monsters however, demons exist as malevolent spiritual forces that are behind corrupt human power structures rather than a physical beings although they can choose to become physical if they so wish. Humans, animals, monsters and even other supernatural beasts that roam the Earth themselves tend to be wary of demons, as the infernal creatures are known for their proclivity to engage in cruel and malicious attacks on any lifeform they believe to be weak and vulnerable.

Throughout history, demons have been responsible for corrupting human relations and power structures, leading the world into a cycle of spiritual turmoil that has been passed down through the generations. These spiritual evils are known to work on the personal level, animating and exploiting the greed and selfishness within individuals in order to manipulate them into contributing in the descent God's good creation back into chaos, darkness, and evil and so are directly involved in spiritual warfare against the forces of God and humankind.

Demons are said to be malevolent angels, and have the same characteristics as their angelic counterparts: spiritual, immutable and immortal. Demons are not omniscient, but each one has a specific knowledge. Their power is limited to that which God allows, so they are not omnipotent. No account has been made about omnipresence, so it is as yet unclear if they can be in different places at the same time, but according to the tradition of the medieval witches' Sabbath, two conclusions can be reached: either the Devil can be in different places at the same time, or he sends an emissary in his name.

In Hell, demons are organized under their masters in legions. Every legion of demons contains 666 demons, all ready to strike out whenever needed. It is a rather a complicated system of hierarchies in Hell, but according to some calculations, the estimated the number of demons is 44,439,622, divided into 666 legions, each legion composed by 6,666 demons, and all of them ruled by 66 hellish dukes, princes, kings, etc.

Gregory of Nyssa, in the 4th century, believed in the existence of male and female demons and supported the idea that demons procreated with other demons and with human women. Other scholars supported the idea that they could not procreate and that the number of demons was constant. With how many demons are in Hell, it most likely that either breed or are born in Hell's environment.

A great number of demons serving in the Abyssal Army are in actuality corrupted human souls that have been forbidden from entering heaven due to their wicked deeds in life, and instead have been conscripted into the Abyssal Army upon entering Hell. The fallen angel Mulciber is believed to have initiated this new breed of demon using the souls damned within Treachery. Mulciber fishes out the souls of the circle, and with three strikes of his hammer, molds them into an Abyssal soldier. These foot soldiers are among the most numerous of the demons, and are considered by many to be among the lowest ranking within the demonic hierarchy, though there are those who are believed to rank even lower.

Demons can take any desired appearance, even that of an "angel of light". Nevertheless, they were generally described as ugly, chimerical and monstrous beings, however, sex demons such as incubi and succubi are described as being beautiful in order to accomplish their mission of seduction.

Demons are known to manifest in forms that combine the attributes of several wild beasts in order serve as apex predators; as a result, demons tend to possess wings, claws, horns. Regarding the color of a demon's skin, since early times it was associated with black, thinking that they assumed the appearance of a black man, although not all descriptions agreed, giving demons very different aspects. Satan and other demons were also often depicted as black-dressed men, often riding a black horse. Other commonly associated colors that demons could used are sickly white, blood red, or even metal-like. When demons appear in the shape of animals, they will appear as a black version of the creature.

A majority of demons, particularly powerful ones, have appearances that are known to induce madness and even death upon mortal onlookers. As such, whenever these demons are summoned they appear in forms that are, according to Dantalion, "compartmentalized" meaning that they reduce their true forms to a lesser but still frightening form, compressing their power enough to enter the mortal plane without any side-effects to both the conjuring party and space surrounding them similarly to angels. These forms could also be contained via specific symbols and magic circles as well in order to retrain the demon long enough to strike a bargain. Certain demons have also been known to disguise themselves as humans and gain an incredible amount of influence in the human world in a short span of time, whether it be among the wealthy upper-class, the criminal underground, or the offices of national power.

Demons have a vast and wide variety of demonic and supernatural powers, with many demons being so powerful that they could threaten humanity as a whole if they were able to cross the barrier into the mortal world. The power of these demons, however, is dependent on their ranks within Hell's hierarchy as the only demons that hold power to destroy the human race are the original ones like the Seven Kings of Hell due to their overwhelming power and endless will over the infernal legions.

Demons usually seem to possess powers that are based on certain elements, such as fire, ice or lightning; and come in a wide array of shapes and sizes. Demons are also considerably stronger and more resilient than both humans and earthly creatures in order to survive and thrive within the otherworldly and unforgivably harsh realm of the Underworld, and are able to perform superhuman and supernatural feats with relative ease.

The first demons came sometime after the creation of the Universe. They were created by the pre-existential entity, Ayin, after she created the Abrahamic Hell and was imprisoned by God Himself, who locked her in the deepest part of Thaumiel. However, some demons like Satan or Tanin'iver were probably created before the universe itself.

The other demons, and also the most famous ones, were born after the Rebellion in Paradise broke out and Michael and his army drove Lucifer's troops out of Heaven and launched them onto Planet Earth. The falling angels lost their grace, "their eyes turned black, their wings were charred, their light turned to darkness, and from angels of God they became demons of Ayin." In addition to these, some demons were born from Lilith who related to several fallen angels, giving rise to several dark beings known as Succubus and Incubus. The first man, Adam, and his mistress Naamah were also the progenitors of several demons.

The original Greek word daimon did not carry negative connotations. The Ancient Greek word δαίμων daimōn denotes a spirit or divine power, much like the Latin genius or numen. The Greek conception of a daimōn notably appears in the works of Plato, where it describes the divine inspiration of Socrates. 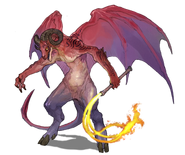 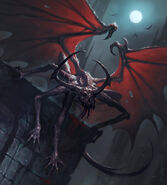 A Twisted Demon (Art by MorkarDFC)

A Demon Spirit (Art by Eemeling)

A demon being summoned (Art by sandara)

A group of demons (Art by Ian Joyner)

A Demonic Possession (Art from Magic: The Gathering)

A pair of demons (Art from Hellblazer)

A Shaitan in Islamic culture (Art from Siyah Qalam)