Gods and Demons Wiki
Register
Don't have an account?
Sign In
Advertisement
in: Races, Djinn, Mythology,
and 2 more

Formed by God (through Allah)

Jinn, also romanized as Djinn or anglicized as Genies (with the broader meaning of spirits or demons, depending on source), are supernatural creatures from early pre-Islamic Arabian and later Islamic mythology and theology.

Like humans, they are created with Vril but without the natural components that humans are composed of. Born as believers who are then changed and influenced by their surroundings. Djinn are not a strictly Islamic concept, but may exist as representations of several pagan beliefs that have been integrated into Islam. In one legend, it is said that Lucifer was the one who created the Jinn through Vril in his attempts to create life, molding them into lifeforms "greater" and "more passionate" than man. However, he was stopped by God and forbade Lucifer from ever using the Secret Fire again.

According to the Alawi sect, the djinn are part of the "circle of time", belonging to a period preceding the creation of mankind. Therefore before humans, the hinn, binn, timm, rimm, jann and djinn roamed the earth. These six periods symbolize negative progress until humans emerge, thus the first letters of the first four circles mean Habtar (here referring to the personification of evil) and the latter referring to jann and djinn as subordinates of the devil. The following circle divides human history, starting with Adam and ends with Muhammad, the period in which humans now live.

Jinn are not supernatural in the sense of being pure spirit and transcendent from nature. They are considered "natural" in the classical sense due to being composed of the elements, being capable of aging, and innate mortality. While they are largely able to become invisible, they must also eat, drink, sleep, and have the desire to breed with the opposite sex. Intercourse is not limited to the jinn alone, but also possible between human and jinn; However, the practice is despised (makruh) in Islamic law. It is disputed whether or not such intercourse can result in offspring.

The Futūḥāt al-Makkiyyah, attributed to the famous Sufi Shaikh Ibn Arabi, reconciles a literal existence of jinn with the imaginal, describing the appearance of jinn as a reflection of the observer and the place they are found. They differ from the angels, which due to their closeness to heaven reflect the spheres of the divine, mainly in their distance to the earth and the heavens, stating:

The jinn share, due to their intermediary abode, both angelic and human traits. Because jinn are closer to the material realm than angels, it would be easier for human to contact a jinn, leading to the complicated history between Humans and the Jinn.

Djinn are neither innately evil nor innately good, but some Djinn, like Iblis, opposed God, and were banished to Hell by Him after refusing to serve humanity. Unlike most fallen angels, the Djinn have the opportunity to repent for their mistake and return to God's grace, though it appears that most of the evil Djinn are too prideful and corrupt for this task, and rather lead humanity astray from God's path.

In scientific treatises the djinn are included and depicted as animals with a subtle body. The Qanoon-e-Islam, written 1832 by Sharif Ja'far, (writing about djinn-belief in India) states that their body constitutes 90% of spirit and 10% of flesh. They resemble humans in many regards, their subtle matter being the only main difference. It is this very nature that enables them to change their shape, move quickly, fly, posses human bodies, cause epilepsy and illness, and tempt humans through magic. They are said to come in a variety of shapes and sizes, with some djinn having different ethereal colorations on what is presumed to be their skin.

The djinn are also ancestrally related to the wind, regarding it as an elder sibling. In their anthropomorphic form, they are said to stay partly animal and are not fully human. Therefore, individual djinn are commonly depicted as monstrous and anthropomorphized creatures with body parts from different animals or human with animal traits. Commonly associated with djinn in human form are the Si'lah and the Ghoul. However, since they stay partly animal, their bodies are depicted as fashioned out of two or more different species. Some of them may have the hands of cats, the head of birds or wings rise from their shoulders.

In popular western culture, Genies are often seen as been concealed with old lamps, which when rubbed a Genie appears out of them. The reason given is that they have been trapped inside the lamp by an evil sorcerer. Traditionally, it is said that the great and wise King Solomon shut misbehaving djinn in lead-stoppered bottles and threw them into the sea.

This description comes from the western translation of "The Book of One Thousand and One Nights". When someone rubs the lamp three times the Jinni inside will appear and obey the one who set it free by granting three wishes. However, in the original lore, djinn are not found in brass lamps and do not grant wishes.

In Hell, they are based in the city Jinnestan, which they share with some members of the Ars Goetia. These evil djinn are also called the Shaitan, who are argued to be most wicked beings of the world. 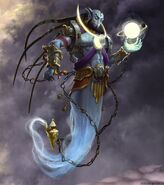 An enraged Djinn (Art from Heroes of Camelot)

A Djinn being summoned (Art by JasonEngle)