Gods and Demons Wiki
Register
Don't have an account?
Sign In
Advertisement
in: Races, Monster, Spirit,
and 4 more

A Dullahan is a headless, demonic fairy that is usually riding a black horse and carrying their head under their arm.

The story of the Dullahan comes from Ireland. They are depicted as headless riders, on black horses, who carries their own head held high in his hand. Usually, the Dullahan is male, but there are some female versions. They are particularly active in the more remote parts of Ireland, specifically the counties Sligo and Down. Around midnight on certain Irish festivals or feast days, this wild and black-robed horseman may be observed riding a dark and snorting steed across the countryside.

Humans are able to become a dullahan in various special ways. Two of these ways are wearing certain cursed armors that fully turns the wielder into one without a way to change back and to lose their head while holding a debt to a fae. Unlike the banshee, the dullahan does not pursue specific families and its call is a summoning of the soul of a dying person rather than a death warning.

The ancient Irish believed that where the Dullahan stops riding, a person is due to die. The Dullahan calls out the person's name, drawing away the soul of his victim, at which point the person immediately drops dead. It is said to be the embodiment of the Celtic deity Crom Dubh. The Dullahan is believed to use the spine of a human corpse for a whip, and its wagon is adorned with funeral objects: it has candles in skulls to light the way, the spokes of the wheels are made from thigh bones, and the wagon's covering is made from a worm-chewed pall or dried human skin.

On nights of Irish feast days, it is advisable to stay at home with the curtains drawn; particularly around the end of August or early September when the festival of Crom Dubh reputedly took place. There is no way to bar the road against a Dullahan, as all locks and gates open on their own when it approaches. Also, they do not appreciate being watched while on their errands, throwing a basin of blood on those who dare to do so (often a mark that they are among the next to die), or even lashing out the watchers' eyes with their whips. Nonetheless, they are frightened of gold, and even a single gold pin can drive a Dullahan away.

Although the dullahan has no head upon their shoulders, they carries it with them, either on the saddle-brow of their horse or upraised in their right hand. Usually, the Dullahan are male, but there are some females as well. The head's black eyes are either small or massive and constantly dart about like malignant flies, while the mouth is usually in a hideous, idiotic grin that touches both sides of the head.

Its eyes are constantly moving about and can see across the countryside even during the darkest nights. The flesh of the head is said to have the color and consistency of stale dough or moldy cheese, and quite smooth. The entire head glows with the phosphorescence of decaying matter and the creature may use it as a lantern to guide its way along the darkened laneways of the Irish countryside.

The origins of the dullahan are not known for certain, but he is thought to be the embodiment of an ancient Celtic god, Crom Dubh, or Black Crom. Crom Dubh was worshipped by the prehistoric king, Tighermas, who ruled in Ireland about fifteen hundred years ago and who legitimized human sacrifice to heathen idols. Being a fertility god, Crom Dubh demanded human lives each year, the most favored method of sacrifice being decapitation.

The worship of Crom continued in Ireland until the sixth century, when Christian missionaries arrived from Scotland. They denounced all such worship and under their influence, the old sacrificial religions of Ireland began to lose favor. Nonetheless, Crom Dubh was not to be denied his annual quota of souls, and took on a physical form which became known as the dullahan, the tangible embodiment of death.

A female Dullahan (Art by Zombiesmile) 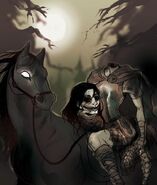 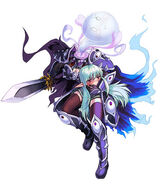