Gods and Demons Wiki
Register
Don't have an account?
Sign In
Advertisement
in: Articles that need art credits, Location, Planet,
and 3 more

The Earth is a planet created by God with the aid of many lesser creation deities that respectively supports a large variety of life, including bacteria, humans, vegetation, and even intelligent animals.

It is the only planet to hold more than one pantheon on it. It is one of many planets within the Human Realm. The planet is nearly 5 billion years old and is located in the Solar System, within the Milky Way Galaxy. The Earth is characterized by its extensive bio diversity and it's range of environments across the globe, each of which have come to be inhabited by the Human species. Entities like angels and demons can manifest on Earth via possession in the use of vessels. Others can appear physically by assuming human form.

In the history of the Earth, biodiversity has gone through long periods of expansion, occasionally punctuated by mass extinction events. Over 99% of all the species of life that ever lived on Earth are extinct. Estimates of the number of species on Earth today vary widely; most species have not been described. Over 7.3 billion humans live on Earth and depend on its biosphere and minerals for their survival. Humanity has developed diverse societies and cultures; politically, the world is divided into about 200 sovereign states.

Humans are the dominant species on the planet. They are often considered as one of the greatest creations of God, and unlike angels and demons, they are neutral in the war between Heaven and Hell, not including hunters whom are aware of the supernatural occurrence. Though many humans worship God and believe in the existence of Heaven and Hell as well as the occult, most remain unaware of the many supernatural entities roaming the planet.

As humans roam the Earth, so do monsters. Monsters often spend their time preying or toying with the humans, seeing them as nothing but playthings or food. While they are only known through legend, the monsters keep their existence secret by hiding themselves or posing as humans. Over the ages, humans have come to worship various Earth Deities who either rule over the planet as gods, or are themselves embodiments of the earth which may manifest either as life giving motherly figures or destructive beasts.

Humans believe the Earth to be an oblate spheroid, flattened at the poles and bulging at the equator. Modern calculation estimate the Earths width to be 12,756km at the equator and 12,714km from pole to pole and this rounded up to 13,000km. However, it is revealed by Odin that the Earth is far larger than humankind believes. He elaborates that satellites and modern technologies can only perceive a fraction of the Earth, and that its true size is hidden by mystical barriers that create a mass illusion of the Earth being smaller than it actually is.

During the ancient times of man, when the Convergence first set upon the orbital rings of the planet, various realms that housed creaures and beings of mythical lore overlapped with the material plane of the Earth allowing them safe passage unto the planet and establish contact with mortals for the first time. The overlapping of these realms, which were akin to discs, molded the Earth on a more metaphysical level which further explains as to why the Earth is much larger than it seems. Vast portions of the Earth are unable to be reached unless accessed through specific gateways that connect these hidden locations to the rest of the planet, remaining otherwise invisible to humankind.

In the beginning, God created the heavens and the earth, and the earth was without form and void; the planet was in a disorganized state like a flaming ball in space, the world was chaotic, lifeless, strange and ultra hot, it was a ball of molten rock orbiting a newborn star. The spirit of God breathed upon the face of the flaming abyss. Until then, another planet began to approach the Earth, its name was Theia, approximately the size of Mars and, it was going faster than a bullet towards the planet and the planetary collision was inevitable, with the two spheres colliding and Theia being totally destroyed and Earth getting twice as small.

After the collision between the two planets, the Earth began to stabilize and, in time, the debris around the Earth ended up merging into a white sphere of rock and stone that orbits the planet to this day, the Moon. Over time, several asteroids and meteorites began to fall on planet Earth, with each containing at least a drop of water. Over the course of millions of years with the Earth being bombarded by asteroids, the planet was covered by a large ocean of water, those were the primordial oceans.

Within the first billion years of Earth's history, life appeared in the oceans and began to affect the atmosphere and surface, leading to the proliferation of aerobic and anaerobic organisms. Some geological evidence indicates that life may have arisen as much as 4.1 billion years ago. Since then, the combination of Earth's distance from the Sun, physical properties, and geological history have allowed life to evolve and thrive.

Much of the Earth was molten because of frequent collisions with other bodies which led to extreme volcanism. A "giant impact" collision with a planet-sized body is thought to have been responsible for forming the Moon. Over time, the Earth cooled, causing the formation of a solid crust, and allowing liquid water to exist on the surface. In this time period, Angels and Demons were able to manifest in their true forms and one angel was even said to have kept a dinosaur as pet.

During the dawn of creation, it is said that when Cain murdered his brother Abel out of rage and jealousy, the Earth itself was said to be cursed with Abel's very blood, which was spilled from the massacre. The emergence of the first murder committed by Adam and Eve's first born, would later spread throughout the land and infect those who possess a darkness within their hearts.

According to the Bible, the Earth was intended by God to be the pinnacle of Creation and a symbol of his dominance over the forces of Chaos. However, due to the sins of mankind the Earth became tainted by corruption, transforming the harmony in nature into a viscous cycle between predator and prey, death and survival. Now the Earth serves as the battleground between Angels and Demons for the eternal souls of mankind.

Shortly after humans were banished from the Garden of Eden, Cain murdered his brother Abel out of rage and jealousy. The Earth again became cursed, this time with Abel's very blood. The emergence of the first murder committed by Adam and Eve's first born, would later spread throughout the land and infect those who possess a darkness within their hearts.

Eventually, the descendants of Adam and Eve became so numerous and sinful that God sent down a deluge known as the Great Flood, sparring only Noah a swell a few other faithful humans and 2 members of each animal species, because they had sought refuge in Noah's Ark as God had commanded. The Flood lasted for 30 days and 30 nights, during which the Earth was sent into turmoil and upheaval that shook it to its very core. When the waters finally retreated, the landscape of the Earth was completely transformed, and a new beginning for life on Earth commenced.

According to the Aztecs, in the beginning the universe was just a giant empty Void hovering over primordial ocean that was home to the Primordials. Of the three reptilian brothers, Cipactli was the least enthusiastic about the arrival of gods into the cosmos. Whenever the deities made anything, it would fall into the ocean and Cipactli would devour it completely.

The gods were forced to come up with a plan that involved Tezcatlipoca luring Cipactli to the surface by using his leg as bait. This resulted in the deity losing the limb in the process, but in turn the four gods attacked and killed Cipactli, afterwards turning his body into the Earth. However Cipactli isn't fully dead, so the gods have vowed to offer him blood sacrifices continually least he return to wreck havoc upon the gods once again. 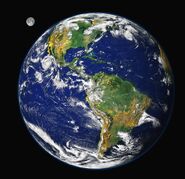 City Lights from the Earth (Art by shumworld)

Solar Eclipse on Earth (Photo by ???) 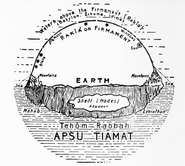 Earth through the view of the ancient Hebrews (Art by ???)