Gods and Demons Wiki
Register
Don't have an account?
Sign In
Advertisement
in: Beings, Primordial, Light Deity,
and 7 more

Everything, God, Creation (One with it), The Darkness (Nemesis)

Ein Sof Ohr is an emanation of God who personifies the unlimited light of the Creator that was used to separate light from The Darkness, giving rise to Night. Ein Sof Ohr is the embodiment of the Megaverse, also being all primordial entities united into one, with Ohr existing as one in all, but Ohr existing separate from all. Ohr is the light of God embodied in an entity of limitless power, being the source of light and order that is in constant balance with The Darkness.

When God said "let there be light" a mighty light manifested in the Hand of the Creator and through that light all creation came into being. Ein Sof is the Kabbalistic term for God, in the Kabbalistic concept, simple Ohr Elion (Upper Light, too. Ein Sof Ohr) is used to represent all reality filled only by Ein Sof. Kabbalists metaphorically differentiated the manifestations of God as being lights. This difference outweighed the criticism, "introducing plurality into the monotheism of Judaism," of the rabbinate.

The primary texts; they take great care in emphasizing this difference, and caution against anthropomorphizing the subtle descriptions of Kabbalah in human terms. To avoid such heresies, the historical transmission of Kabbalah was traditionally restricted to direct teaching in closed circles. The Light was used by Yahweh to separate light and darkness, resulting indirectly in the birth of Night, the "sister" of Ohr.

Ohr exists eternally as the nemesis and archenemy of The Darkness, being also its weakness, with every light existing in the Multiverse being a spark of its essence, including but not limited to starlight, fire, lamps, fireflies, as well as light reflected from the Earth, moon, other planets and celestial bodies, and including even human beings who are emanating light, albeit at indescribably small levels compared to sunlight. Human souls also have their light, which is a light that is closer to Ohr than any material light source, this same light being the light that forms the bodies of angels, a spiritual and unfathomable light. This light is the weakness of darkness, as described in John 1:5, And the light shineth in darkness; and the darkness comprehended it not. Light is the weakness of darkness.

Much like Ein Sof, Ein Sof Ohr doesn't have any definite true form, however, it has been described to appear as a endless amount of light. Due to being an infinite amount of light, Ein Sof Ohr's true form is incomprehensible and unending with it spreading throughout all of existence.

In the beginning there was nothing, the universe was without form, and void. And the Spirit of God moved over the face of an ocean of chaotic waters, the darkness covered the Abyss. God didn't like that unproductive, disordered state of the universe, so the Lord breathed into the depths of the Abyss and said "let there be light" and there was light. This light was emanated by God, called Ein Sof Ohr, which was cast over Darkness and illuminated the dense darkness, causing it terrible pain. God then separated darkness from light, giving way to Day and Night, and God saw that it was good.

The Ein Sof (literally: "Without End"/Limitless/Infinite) is the Kabbalistic term for the Divine essence. Kabbalah describes 10 Sephirot (The 10 Divine emanations or attributes), that reveal the unknowable Godhead to the creations and channel the creative life-force to all levels of existence. However, these 10 attributes of God do not represent the Divine essence. The Kabbalists differentiated between the manifestations of God (forms of "light"), and their origin in the Divine essence (the "Luminary"). This difference overcame the criticism that they were introducing plurality into the pure Monotheism of Judaism. Kabbalistic texts take great care to emphasise this difference, and warn against anthropomorphising the subtle descriptions of Kabbalah in human terms. To avoid such heresies, the historical transmission of Kabbalah was traditionally restricted to direct teaching in close circles.

As well as the 10 "lights" of God encapsulated in the Sephirot, Kabbalah also describes a more primordial light that shines from the Ein Sof (Infinite) itself. This light, the origin of all Creation, and all lower lights, is called the "Ohr Ein Sof" ("The light of the Infinite", or alternatively, itself "The Infinite Light"). The Kabbalistic and Hasidic masters ask the question of how there can be a revelation of God, in the Ohr Ein Sof, before Creation. Surely, there can be "no king without a people". Before Creation, there could be no being to behold a revelation of Divine light. The Ohr Ein Sof is a form of Divine self-knowledge, and through God knowing Himself, He created everything, with its subsequent historical unfolding, and its ultimate purpose in the innermost Divine Will. 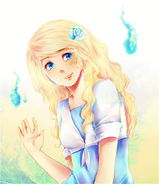