Gods and Demons Wiki
Register
Don't have an account?
Sign In
Advertisement
in: Beings, Avatars, God,
and 3 more

El Shaddai is one of God's avatars in Creation. His name means "God Almighty".

He is the avatar of God who appeared to Abraham with Gabriel and Raphael to announce Sarah's pregnancy and the destruction of the Cities of Sodom and Gomorrah, and was the "angel" who fought with Jacob.

His appearance is always described as that of a man. He appears covered by a large cloak that covers his all body, including his face.

He proved to be someone serious and patient, but very friendly. When he visited Abraham, he calmly waited for the Father of Faith to prepare a meal for him and his accompanying angels, Raphael and Gabriel.

He showed himself very merciful, as when he warned Abraham that he would destroy the two cities of sin, Sodom and Gomorrah, but he would save if there were at least 50 righteous in the cities, but after much insistence by Abraham, he said he would save the city if there were 10 fair people, Unfortunately, there weren't even half of 10, so he, as he promised, destroyed the two cities, minus Lot and his two daughters.

The El Shaddai, like the other avatars of God, like Shekhinah and Yahweh, was created when a stray shot by Khaos hit God and blasted a piece of him. Instead of recovering all the fallen pieces, God decided to transform some of them into new beings, so as not to destroy Creation with his power.

In the 17th century BC, God spoke to Abraham and promised him a great nation, to appear to Abraham he sent El Shaddai as his messenger, and Gabriel and Raphael accompanied him on this mission. He promises to bless Abraham and Sarah with a baby, who would turn out to be Isaac. Afterwards, he destroys the cities of Sodom and Gomorrah (with God's permission) and saves the family of a man named Lot, but his wife ends up dying while watching the cities being destroyed and turned into a pillar of salt.

Several years later, he fights Isaac's son and Abraham's grandson, Jacob. And after a night of persistence, he finally blesses Jacob. After that event, its whereabouts are unknown.

El Shaddai, or just Shaddai, is a name of God in Judaism. El Shaddai is conventionally translated into English as God Almighty (Deus Omnipotens in Latin), but its original meaning is unclear. The name Shaddai appears 48 times in the Bible, seven times as "El Shaddai" (five times in Genesis, once in Exodus, and once in Ezekiel).

The name "Shaddai" often appears on the devices such as amulets or dedicatory plaques. More importantly, however, it is associated with the traditional Jewish customs which could be understood as apotropaic: male circumcision, mezuzah and tefillin. The connections of the first one with the name Shaddai are twofold.

While the translation of El as "god" in Ugarit/Canaanite language is straightforward, the literal meaning of Shaddai is the subject of debate. Some say it means "destroyer" or "to overpower." El Shaddai can convey several different semantic relations between the two words. 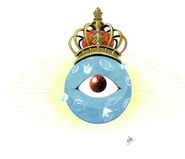 Jacob being blessed by El Shaddai (Scene from Joseph of Egypt)