Gods and Demons Wiki
Register
Don't have an account?
Sign In
Advertisement
in: Beings, Avatars, God,
and 5 more

Elohim is one of the many avatars of God, being an embodiment of one of His countless different names and aliases that have been diffused throughout history.

Elohim is a common name of God in Judaism. It is often used as a plural term in the Hebrew Bible, and some use it refer to the God of the New Testament, while Yahweh would refer to the God of the Old Testament. In the Latter Day Saint movement and Mormonism, Elohim refers to God the Father. Elohim is the father of Jesus in both the physical and the spiritual realms, whose name before birth is said to be Jehovah. One meaning includes, "He with whom the Afraid take Refuge."

He represents the interpretation of the Abrahamic God as a solar deity, and in the kabbalistic mysteries of the Tree of Life, is said to govern the Sefirah of Chokhmah, the manifestation of the limitless creative power of the godhead and the active principle that regulates creation as a whole.

It is often used as a plural term in the Hebrew Bible, and some use it refer to the God of the New Testament,

Elohim is a term of Hebrew origin, its correct translation would be "Gods" and "Goddesses", being the plural of "Eloah", it was used around 2,500 during the Tanakh. The meaning of the word is "strong" or "mighty". Despite being a plural word, it was used throughout the Bible as singular; "In the beginning, Gods (Elohim) created the heavens and the earth." The reason for this is because Moses used something called the "Majestic Plural", also called the royal plural, is the use of a plural word (like the pronoun we or we ) to refer to a single person. When the Bible came to the West, the word Elohim was translated to "God", in the singular, however, it is possible to see the emphasis of the real plural in some biblical passages still (Genesis 1:26 and Genesis 3:22).

The majestic plural is also found in one of God’s most common names in the Old Testament, Elohim. The word itself is plural (the singular is Eloah), and it is sometimes translated as “gods” (when referring to a plurality of false gods). When it refers to the One True God, Elohim (plural) is correctly translated as “God” (singular). In Deuteronomy 4:35 says, “The LORD is God”—literally, “Yahweh is Elohim.” And the famous Shema says, “The LORD our God, the LORD is one.” Again, we have the singular Lord coupled with the plural Elohim, and this time in a verse that is crystal clear that there is only one God. His name’s plural form indicates His sovereign supremacy, His matchless might, and His exceeding eminence.

Elohim occurs frequently throughout the Torah. In some cases, it behaves like a singular noun in Hebrew grammar, and is then generally understood to denote the single God of Israel. In other cases, Elohim acts as an ordinary plural of the word Eloah, and refers to the polytheistic notion of multiple gods. Rabbinic scholar Maimonides wrote that the various other usages are commonly understood to be homonyms.

The notion of divinity underwent radical changes in the early period of Israelite identity and development of Ancient Hebrew religion. The ambiguity of the term elohim is the result of such changes, the re-interpretation of the gods of the earliest recalled period as the national god of monolatrism as it emerged in the Kingdom of Judah and during the Babylonian captivity, and further in terms of monotheism by the emergence of Rabbinical Judaism. 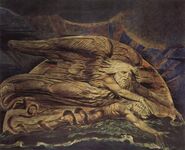 God creating to Adam through The Elohim (Art by William Blake) 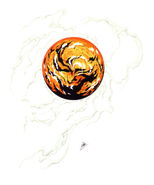 The Elohim as The Sun (Art by Shin Megami Tensei II)