Gods and Demons Wiki
Register
Don't have an account?
Sign In
Advertisement
in: Heaven, Location, Realm,
and 4 more

The Empyrean, also known as the Empyrean Heaven, or the Timeless Halls, is the said to be the highest transcended realm in the spheres of Heaven itself, and is the abode of God Himself.

It is the highest transcended place of Heaven and is the or the dwelling-place of God, the blessed, celestial beings so divine they are made of pure light, and the source of light and creation. Its neighboring abode is where the Tree of Life is located. The realm is guarded by a group of powerful angels known as the Empyrean Guard who are equal in power to the true Archangels themselves.

The first Archangels themselves once dwelled within such a place, and only five known archangels have been there and personally seen God. Those five being the first true archangels; Lucifer, Michael, Gabriel, Raphael and Uriel. Metatron is known to have also witnessed God in His abode. As the Empyrean exist within the space but "separated yet united", these angels are among those that would personally see the Supreme Being of all creation.

To properly describe the Empyrean is said by many to be utterly impossible in human words. However, according to a certain prophet of God, who was fit and worthy enough to enter the Empyrean and even witness God, he describes witnessing an enormous rose, symbolizing divine love, the petals of which are the enthroned souls of the faithful. Angels fly around the rose like bees, distributing peace and love.

The Empyrean is also said to be the realm of which angelic weapons are forged as well. And it is there where the element of fire, or more specifically the divine fire of God known as Aether, is known to manifest and course throughout the realm of the high heaven. The archangel Jophiel oversees the forging of the weapons of Heaven, as well as the gardening that is formed in the interior. The archangel Metatron, on the other hand, is tasked with guarding the outer layers of the Empyrean while writing down the names of those who are most worthy to enter and win over God's favor. 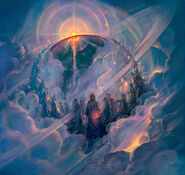