Gods and Demons Wiki
Register
Don't have an account?
Sign In
Advertisement
in: Group, Deity, Mythology,
and 6 more

Erinys, Furies, Semnai, Dirae, Kindly Ones, Venerable Ones, The Punishers, Spirits of Vengeance, Infernal Goddess, Greatest of the Furies, Daughters of Nyx

The Erinyes are a trio of female chthonic deities of vengeance which serve as the main enforcers of Hades.

The Erinyes were either female deities of vengeance or supernatural personifications of the anger of the dead in Greek mythology. They represent regeneration and the potency of creation, which both consumes and empowers. They were said to be the physical embodiment of the gods' vengeance and would be in charge of monitoring the Fields of Punishment. Myth fragments dealing with the Erinyes are found among the earliest extant records of ancient Greek culture. The Erinyes are featured prominently in the myth of Orestes, which recurs frequently throughout many works of ancient Greek literature.

A formulaic oath in the Iliad invokes them as "those who beneath the earth punish whosoever has sworn a false oath". Their number varies, but most commonly there were said to be three. Each one was sometimes represented as avenging a certain type of crime, such as murder, marital infidelity, or patricide. The Erinyes are well known for being relentless and persistent for they will not rest even to the ends of the earth until they have caught the perpetrator nor will they cease until the culprit is broken in mind, body, and soul in punishment for their sins. However, the Erinyes would never killed their victims unless ordered to. The wrath of the Erinyes could only be placated with the rite ritual purification and the completion of some task assigned for atonement.

The Erinyes live in Erebos and are more ancient deities than any of the Olympians. Their task is to hear complaints brought by mortals against the insolence of the young to the aged, of children to parents, of hosts to guests, of householders or city councils to suppliants, and to punish such crimes by hounding culprits relentlessly. The Erinyes would pursue sinners and take their souls to the underworld, where they would be given unendurable punishments to fit their crimes.

The three well known Erinyes were Alecto ("unceasing"), Megaera ("grudging"). and Tisiphone ("vengeful destruction"). Alecto was charged with punishing those who committed moral crimes as anger, especially when used against others, and was the goddess of Anger. Megaera was the goddess of Jealousy; she punished those who had committed crimes such as cheating and adultery. Tisiphone was the third sister and the goddess of Vengeance, punishing those who have committed the crimes of murder: patricide (killing leaders or your father), fratricide (killing your brother) and homicide.

The Erinyes are commonly associated with night and darkness. With varying accounts claiming that they are the daughters of the primordial goddess of the night, Nyx, with some having Hades as the father, they're also associated with darkness in the works of Aeschylus and Euripides in both their physical appearance and the time of day that they manifest. In some accounts, they were from a union between air and mother earth, the daughters of Euonymè (a name for Earth) and Cronus or of Earth and Phorkys (i.e. the sea).

In Roman mythology, they were known as the Dirae, the Eumenides ("Gracious Ones") or the Furiae. The Roman writer Maurus Servius Honoratus wrote (ca. 600 AD) that they are called "Eumenides" in hell, "Furiae" on earth, and "Dirae" in heaven.

They were depicted as fearsome goddesses clothed in black with serpent-entwined hair and arms. The Erinyes are crones and, depending upon authors, described as having snakes for hair, dog's heads, coal black bodies, bat's wings, and blood-shot eyes. When they are angered their skin is said to turn charcoal black, but when appeased it becomes white. In their hands they carry brass-studded scourges, and their victims die in torment.

While there are various accounts that detail their creation, their exact origin is unknown. However, the more widely known version is that they were created when the Titan Cronus castrated his father Ouranos and threw his genitalia into the sea, the Erinyes emerged from his drops of blood, while Aphrodite was born from the seafoam.

Orpheus' journey to the Underworld

The famous demigod musician Orpheus, devastated by the untimely death of his wife Eurydice, creates a new entrance to the Underworld with his beautiful music and singing. He made his way all the way to Hades' palace, with ghosts, monsters, Charon, Cerberus, and even the Furies themselves being brought to tears by his ineffably lachrymose and beautiful music.

Theseus was also affected by the Furies. When he and one of his good friends decided to kidnap Persephone, they went into the underworld destroying monsters and scaring ghosts. They also intimidated Charon to take them across the River Styx. Finally, when they were almost at Hades' palace, they decided to take a rest. When Theseus woke up, he was paralyzed and his friend has turned into stone and crumbled. The Furies hover on top of them, saying it is a rightful punishment for trying to kidnap their queen Persephone. Theseus is freed after Heracles went into the underworld to capture Cerberus.

When King Agamemnon returns home from the Trojan War, he is slain by his wife, Clytemnestra, who wants vengeance for her daughter Iphigenia, who was sacrificed by Agamemnon in order to obtain favorable winds to sail to Troy. Later, their son Orestes has reached manhood and has been commanded by Apollo's oracle to avenge his father's murder at his mother's hand. Returning home and revealing himself to his sister Electra, Orestes pretends to be a messenger bringing the news of his own death to Clytemnestra. He then slays his mother and her lover Aegisthus. Although Orestes' actions were what Apollo had commanded him to do, Orestes has still committed matricide, a grave sacrilege. Because of this, he is pursued and tormented by the terrible Erinyes, who demand yet further blood vengeance.

Orestes is told by Apollo at Delphi that he should go to Athens to seek the aid of the goddess Athena. In Athens, Athena arranges for Orestes to be tried by a jury of Athenian citizens, with her presiding. The Erinyes appear as Orestes' accusers, while Apollo speaks in his defense. The trial becomes a debate about the necessity of blood vengeance, the honor that is due to a mother compared to that due to a father, and the respect that must be paid to ancient deities such as the Erinyes compared to the newer generation of Apollo and Athena. The jury vote is evenly split. Athena participates in the vote and chooses for acquittal. Athena declares Orestes acquitted because of the rules she established for the trial.

Despite the verdict, the Erinyes threaten to torment all inhabitants of Athens and to poison the surrounding countryside. Athena, however, offers the ancient goddesses a new role, as protectors of justice, rather than vengeance, and of the city. She persuades them to break the cycle of blood for blood (except in the case of war, which is fought for glory, not vengeance). While promising that the goddesses will receive due honor from the Athenians and Athena, she also reminds them that she possesses the key to the storehouse where Zeus keeps the thunderbolts that defeated the other older deities. This mixture of bribes and veiled threats satisfies the Erinyes, who are then led by Athena in a procession to their new abode.

Oedipus comes to his final resting place in the grove dedicated to the Erinyes. It shows that he has paid his penance for his blood crime, as well as come to integrate the balancing powers to his early over-reliance upon Apollo, the god of the individual, the sun, and reason. He is asked to make an offering to the Erinyes and complies, having made his peace.

They are sometimes named among the Harpies who live in Hades, the Greek underworld. In Dante's Inferno, Dante followed Virgil in depicting the same three triptych of Erinyes. The heads of these Erinyes were wreathed with serpents and their eyes dripped with blood, rendering their appearance rather horrific. Sometimes they had the wings of a bat or bird and the body of a dog.

They were later placed in Hell, and were tasked with punishing those who committed ill will towards others. Despite being residents in the Inferno, they are not bound by other demon lords such as Satan, as such the king of Hell has no control over them. However, should a damned soul attempt to escape or if a human committed atrocities that fit the description of which they oppose, the Devil can send the Erinyes to perform their sworn duty.

The word Erinyes is of uncertain etymology; connections with the verb ὀρίνειν orinein, "to raise, stir, excite", and the noun ἔρις eris, "strife" have been suggested; Beekes, pp. 458–459, has proposed a Pre-Greek origin. The word Erinys in the singular and as a theonym is first attested in Mycenaean Greek, written in Linear B, in the following forms: 𐀁𐀪𐀝, e-ri-nu, and 𐀁𐀪𐀝𐀸, e-ri-nu-we. These words are found on the KN Fp 1, KN V 52, and KN Fh 390 tablets.

The Erinyes persist as a theme that appears in modern literature. They are mentioned in the poem "To Brooklyn Bridge" by Hart Crane. The Eumenides are also featured in T. S. Eliot's play, The Family Reunion, Neil Gaiman's comic book series, The Sandman, and Rick Riordan's book series, Percy Jackson and the Olympians. In the 1875 comic opera Trial by Jury by W.S. Gilbert and Arthur Sullivan, the Learned Judge describes himself as having once "danced a dance like a semi-despondent fury" while in Westminster Hall. The movie franchise Alien is said to be inspired by the Erinyes.

The Kindly Ones, the sixth novel in the Anthony Powell sequence A Dance to the Music of Time is set before and at the beginning of Britain's entrance to World War II. The Kindly Ones (original French title Les Bienveillantes), a 2006 Holocaust novel by Johnathan Littell, draws not only its title, but also many of its themes and its structure from Aeschylus's Oresteia trilogy. The British painter Francis Bacon gained notoriety in 1944 by his triptych of the Orestes as a nihilist depiction of the human condition. The 2020 video game Hades, by Supergiant Games, features each of the Furies as the three possible boss fights of Tartarus, with Megaera also present at the House of Hades as an interactable character sometimes when defeated. 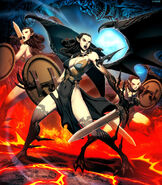 The Erinyes with their whips (Art by HanoOide)

The Erinyes in a Modern appearance (Art by nonaBlog)

The Erinyes as old ladies (Art by John Rocco) 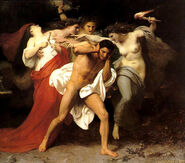 The Remorse of Orestes, where he is surrounded by the Erinyes (Art by William-Adolphe Bouguereau)