Gods and Demons Wiki
Register
Don't have an account?
Sign In
Advertisement
in: Races, Spirit, Magic,
and 7 more

A fairy is a type of mythical creature in European folklore, a form of spirit, often described as metaphysical, supernatural, or preternatural. As the Fae, it can also be treated as a classification.

There are many definitions of what a fairy is. "Fairy" can describe either a single being or multiple ones like Trolls, Banshees, and Gnomes. Some say they are spirits of the dead, elementals in alchemy, demoted angels of God, demons, Pagan Gods, a type of human, and more. They are known as the opposites and enemies of the Creatures of the Night and Demons, which also indirectly makes them the allies of the Angels.

While it is believed that fairies are sweet and innocent beings, they are in fact, far from it. Fairies of folklore were vicious, vindictive and cruel; embodying forces of nature and often appearing as monstrous figures rather than the winged pixie-like beings we associate the word with today.

Fairies are known by many other names, with their primary title "fairies" taken after their homeland, the world of Faerieland. Other than faeries, fey and Fair Folk, they are also known as the Kind Ones, Little People, Good Neighbors, and some other euphemisms, partly because of their enormous variety and partly because of age-old superstitions about invoking them by name.

Fairies of folklore were blamed for all manner of mischief and ills, ranging from petty vandalism and theft to outright murder and kidnap and they would frequently be blamed for causing livestock to grow sick or die, they would lead travelers astray at night or lure men to their doom near ponds and rivers and if sufficiently angered they would even kill.

Fairies could kidnap women, children or men as they saw fit, often at times replacing infants with Changelings. But more frequent targets of fairies were travelers and musicians as many Fairies were said to love song and dance. Legends speak of the dangers of such merriment as many mortals have been captivated by a troop of fairies dancing,  although not particularly an act of malice these fairies would often spirit the captivated mortal away to the "other world" to live with them, often never to be seen again by mortal eyes.

The fairies came in several distinct types and courts, two most well known being the respected but feared Seelie Court (also known as the Summer Court) and the most feared and malicious were the Unseelie Court (also known as the Winter Court) who would often attack and harass mortals without cause or reason. They consisted of Redcaps, Goblins, Hags, Hiisi and other malicious spirits.

Out with these courts were other fairy troops and individuals, though these were more amoral in regards to mortals they were still greatly feared and ruled in a manner not unlike that of ancient gods namely with vengeance and fear.

There was also the Sluagh which is a horde of spirits and fairies of the restless dead which both Seelie Court and Unseelie Court are cautious and fearful around.

While most fairies seemed to exist in the continent of Europe, some live in Africa, such as Jengu in West Africa, Peri in the Middle East and Dokkaebi in Korea. There were also some other tribes of the fairies, like the Haltija and Haldjas.

They are most well-known in both the mundane and supernatural worlds for their characterization as cunning and cruel sense of humor, as well as their delight in tricking others. They frequently characterized as seeking to bargain with mortal beings, offering someone their heart's desire but never mention that said desire comes with a terrible cost. They are committed to notions of honor and etiquette. While they are always exactly to the letter of any promise they have made, they deliver these results with great irony and often use clever wordplay to their advantage in order to create loopholes for them to exploit.

They are unable to lie. They might, however, tell what they believe is true, even if it is not. They may expertly weave lies into sentences by using methods such as not telling the whole truth, letting others assume things, or not correcting the people with whom they're speaking; this does not, however, apply to the half-fairies who possess the ability to lie as easily as any other being. Fairies are also capable of manipulating one another. There have apparently been times when these either playful or serious manipulations, specifically resulting from problems or conflicts between powerful fey, bleed into the world.

Fairies are generally described as human in appearance and having magical powers. Diminutive fairies of one kind or another have been recorded for centuries, but occur alongside the human-sized beings; these have been depicted as ranging in size from very tiny up to the size of a human child. Even with these small fairies, however, their small size may be magically assumed rather than constant. Some fairies though normally quite small were able to dilate their figures to imitate humans.

They are known for their unearthly beauty, many fairies said to be extremely attractive with delicate and regal faces. Though they mostly resemble human beings, some have extraordinary features such as wings, horns, oddly colored-eyes or skin. A common aspect among them is their pointed ears. Fairies commonly incorporate flora and multiple forms of vegetation as part of their ensemble.

A portrait of a fairy (Art by Sophie Gengembre Anderson) 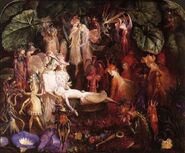 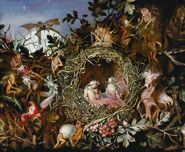 Fairies in a bird's nest (Art by John Anster Fitzgerald) 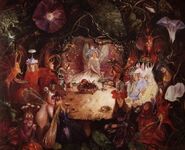