Gods and Demons Wiki
Register
Don't have an account?
Sign In
Advertisement
in: Articles that need art credits, Rank, Human,
and 7 more

The Ghost Rider, or Phantom Rider, is a human, be it normal or magical, who made a contract with a high ranking demon using their Soul. The only way to be allowed to have their soul again, is to take the souls of evil mortals to bring them to Hell before their time. While any demon can make a Ghost Rider, true ones are made by being bonded to a high-ranking angel, sometimes a Dark Angel, or a spirit of vengeance.

Ghost Riders are the end result of a human becoming the chosen vessel of a dark angel or spirit of vengeance, wjo uses them as their divine tools to exact their vengeance against sinners and other malignant entities on Earth. Ghost Riders are always accompanied by a mode of transportation which usually involves a steed or some other construct used for travelling long distances.

It is believed that human can only transform into a Ghost Rider only when they are near malevolent forces and it has been stated numerous times to be near impossible to suppress the insurmountable urges that the being which resides within its host wishes to unleash upon a sinful human or supernatural beast. According to one rider, dark angels do not possess on random for instead the humans they inhabit are chosen based on their views against the world as well as the hardships they endured from an unfair and unjust society.

At night and when around evil, the rider finds their flesh consumed by hellfire, causing their head to become a flaming skull. They rides a fiery motorcycle and wields blasts of hellfire from their body, usually from their skeletal hands.

Ghost Riders are also the natural enemies of Hellspawn, the agents of Satan. Hellspawn and Riders have warred against one another whenever they crossed paths due to the fact that Hellspawn were created by Satan and the Riders by God and thus represent the eternal spiritual warfare between good and evil much like angels and demons. In the case of the Ghost Riders and Hellspawn, their conflicts are due to the fact that the latter kills sinners for them to be added into Hell's legions whereas Ghost Riders destroy sinners and prevent them from joining Hell's legions.

Given that the Ghost Riders have inhabited many different types of vessels throughout history they were engrained within many cultures around the world as a result but each one either being different from the other or somewhat similar but the end result is the same and that is a spirit which seeks vengeance against sinners. Some versions of the Ghost Rider have even assumed the form of a that defends the righteous from malevolent and wicked entities to where these indigenous humans would even carve pendants in a bid to summon the power of the Rider as a ward against evil. Lullabies were also invented but mainly by parents who would sing the melody to children that misbehaved warning them that should they ever commit a wicked deed, be it minor or major, the Ghost Rider will gallop through the night and burn the sins from their very souls.

Ghost Riders are some of the most powerful supernatural entities ever to roam the Earth. They are powerful with great strength, durability and speed and are able to fight Knights of Hell and Hellspawns. Ghost Riders have a vast array of powerful abilities such as being able to control the elements, manipulate souls, sins, and much more. Their most notable abilities are mostly pyrokinetic in nature. While their display of literal firepower can be distinguished as normal flames it is more attributed to the use of Hellfire, a spiritual flame that is capable of burning one's very soul. They can manipulate Hellfire for a variety of purposes such as creating constructs made out of Hellfire and change objects through Hellfire to suit their needs. Despite being composed of bone and hellfire, the Ghost Riders possess formidable superhuman strength, enough to easily pick up a truck and hurl it across a road.

The motorcycle they ride can travel faster than any conventional vehicle and can perform seemingly impossible feats such as riding up a vertical surface, across water, and leaping across great distances that normal motorcycles cannot. The Ghost Riders are virtually indestructible and notoriously hard to injure by any conventional means, as bullets and knives usually pass through them without causing pain (knives are shown to melt while in their body). It is possible that they are genuinely immortal, as it is said that God created them and only God can destroy them. It is due to this that they have been shown engaging in combat against many powerful individuals ranging from high-ranking demons, monsters, angels, and even eldritch entities.

The reason they are called "Ghost Riders" is due to the fact that throughout the centuries Ghost Riders have been reported using various types of transport attributed to the era that they were in. Be it a horse, a car, or a motorcycle, the mode of transportation they use actually changes along with them. The term "Ghost Rider" is also said to have been coined by the Americans, borrowing the legend of the Wild Hunt itself where powerful spectral spirits ride through the dark skies in an eternal hunt against an unconquerable game.

A Ghost Rider of the Past (Art by Ramsés Meléndez) 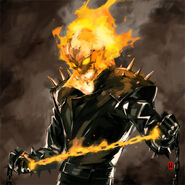 Many former riders (Art from Marvel)