Gods and Demons Wiki
Register
Don't have an account?
Sign In
Advertisement
in: Beings, Avatars, Realm,
and 10 more

The Ginnungagap ("mighty gap") in Norse mythology is the vast, primordial void that existed prior to the creation of the manifest universe. The Ginnungagap, which faced toward the northern quarter, became filled with heaviness, and masses of ice and rime, and from within, drizzling rain and gusts; but the southern part of the Yawning Void was lighted by those sparks and glowing masses which flew out of Muspelheim.

It is one of Khaos' avatars, alongside Amatsu-Mikaboshi. It is said that in Ragnarok, everything will be destroyed, causing all things to return to Ginnungapap for all things to be created again, and so on.

The true form of Ginnungagap is difficult to describe, due to the fact that it is the primordial personification of oblivion and non-existence, being indescribable and devoid of any form or appearance. Its believed true form is that of an impersonal emptiness that seems to encompass the entire Nordic world. In reality, it looks more like a black hole than anything else in the universe. It can also sometimes appear as a humanoid being made of smoke and darkness.

Like with Khaos itself, Ginnungagap is a chaotic and amoral entity, showing complete amorality to anything around it or is in a state similar to unconscious. The only times it shows interest is when a power of overwhelming power and authority seeks to speak it, like God's Norse avatar Fimbultyr, and the Allfather Odin.

Ginnungagap doesn't bother itself with any event as those are usually by humans or gods who are so beneath it that it almost like they don't exist. Sometimes, it would manipulate the entities of the Nine Realms of Yggdrasil by pitting them each other while it watches but this rarely happens.

As an avatar of the chaotic waters that existed before Creation, Ginnungagap is one of the most powerful entities in the Multiverse, being abysmally superior to Angels, Demons and Gods. Unlike the other children of Khaos, Ginnungagap is an avatar, which means it is, in a sense, Khaos himself, embodying all qualities and concepts on a smaller scale, similar to the avatar of God, Jesus Christ, who is the "earthly image of the Invisible God".

The power of Ginnungagap can be represented by a lotus, opening gradually, and as it opens, stars are born and life blossoms. But there is a time when the lotus starts to close, stars die, worlds die, chaos and order are consumed. And then the Lotus extinguishes taking everything that exists back to nothing. From the same, Ginnungagap started the whole creation, and in the end, it himself will take everything back to itself, and then start all over again.

Ginnungagap appears as the primordial void in the Norse creation account. The Gylfaginning states: "Ginnungagap, the Yawning Void ... which faced toward the northern quarter, became filled with heaviness, and masses of ice and rime, and from within, drizzling rain and gusts; but the southern part of the Yawning Void was lighted by those sparks and glowing masses which flew out of Múspellheim". In the northern part of Ginnungagap lay the intense cold of Niflheim, and in the southern part lay the equally intense heat of Muspelheim. The cosmogonic process began when the effulgence of the two met in the middle of Ginnungagap.

Ginnunga- is usually interpreted as deriving from a verb meaning "gape" or "yawn", but no such word occurs in Old Norse except in verse 3 of the Eddic poem "Vǫluspá", "gap var ginnunga", which may be a play on the term. In her edition of the poem, Ursula Dronke suggested it was borrowed from Old High German ginunga, as the term Múspell is believed to have been borrowed from Old High German. An alternative etymology links the ginn- prefix with that found in terms with a sacral meaning, such as ginn-heilagr, ginn-regin (both referring to the gods) and ginn-runa (referring to the runes), thus interpreting Ginnungagap as signifying a "magical (and creative) power-filled space".

An avatar of Ginnungagap (Art from Marvel) 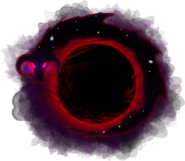 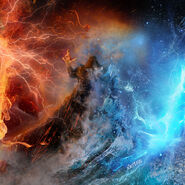