Gods and Demons Wiki
Register
Don't have an account?
Sign In
Advertisement
in: Group, Deity, Great Old One,
and 3 more

Many-Angled Ones, Ogdru Hem, Monstrous Gods, Alien Gods, The Old Ones from the Stars, Whale-Mollusc Gods, Sleeping Ones, Dreaming Ones

The Great Old Ones are a group of unique, malignant beings of great power. They reside in various locations on Earth, and once presided over the planet as gods and rulers.

They are the chaotic, extraterrestrial creations of the Outer Gods which serve as the living embodiments of the unknown and uncharted factors of the universe sent to disrupt the stability of God's creation.

Due to their advanced age, the Great Old Ones are often older and vastly more powerful than the average demon, monster, angel or even deity. And it is said that should they be released upon creation again, they will plunge the universe into darkness and death, a feat that makes them so much of a threat that it forces the angels, demons, and monsters to form uneasy alliances against them. This was proven during the Earth's primordial ages where the angels and the gods worked together to exterminate these malignant creatures from the face of existence.

The Great Old Ones are to be distinguished from the more cosmically placed entities such as Azathoth, Nyarlathotep and Yog-Sothoth, and from races such as the Chthonians, the Deep Oness, the Elder Things and the Mi-go. Yet this distinction is unclear at times, in part because the terminology is not always consistent; for instance, Nyarlathotep, despite his marked interest in Earth and its culture, is generally considered to be one of the Outer Gods instead of a Great Old One. On the other hand, Hastur has several avatars and is generally based in outer space, but he is still considered a Great Old One. There are conflicting accounts on what the proper classification for Shupnikkurat would be.

Very few people dispute that Azathoth and Yog-Sothoth are Outer Gods instead of Great Old Ones, although some accounts make them ancestors of a few Great Old Ones.

As creations of Azathoth and the Outer Gods, the appearance of the various Great Old Ones have been designed to make mockery of God's creation, with these abominable creatures often appearing as a twisted fusion of animal features, internal organs, and invasive fungi among other bizarre things of the universe. Great Old Ones have often been described as a mixture of aquatic and insectoid features, with only a rare few possessing a vaguely humanoid appearance.

Unlike the Outer Gods, the Great Old Ones are not all necessarily malevolent; even though many among them have the power to end the world on a whim, most never actively seek the destruction of humankind. This is perhaps due to the vast and bizarre power these alien creatures wield; to a Great Old One, humanity just is not worth the trouble of extermination, but that by no means forbids them from toying around with mortals as a child would an insect. The morality of the Old Ones is said to be based around entirely alien concepts and values, once again defining their embodiment of the cold and uncaring nature of the universe.

While there are many accounts of their conception, one legend states that they were formed out of the many threads of the primordial chaos that predated the universe. It is said that before the imprisonment of Azathoth, it released slivers of itself that became known as the Outer Gods whom then later conceived and formed their far more numerous offspring, usually the Great Old Ones.

These beings were created to spread throughout the uncharted dark corners of the cosmos, slowly poisoning it with their influence and corruption. However, it was not long before God took wind of their existence and tasked His angels with finding and eradicating them, thus, many angels left Heaven for a time and traveled to the darkest depths of space. They were mostly successful, but were unable to fully prevail in their mission. Many of the Old Ones were unable to be destroyed, and thus the angels resorted to imprisoning them in either different dimensional planes of existence, other planets, or uninhabited places in space. The remaining Great Old Ones were able to escape their wrath by hiding.

During the epoch of the Earth's time, several Old Ones found the planet and decided to claim it as their own, however, each time they would be thwarted by their own kind as they were not too keen on sharing. This sparked many wars between the Great Old Ones which are revealed to be the cataclysmic events that wiped the dinosaurs from extinction. As of now, the Great Old Ones are either inactive via slumbering in the darkest corners of the Earth or space, or active by telepathically commanding the humans that follow them. The other reason they are in hiding is because the archangels are actively hunting them.

Ever since their arrival on Earth, not only have the Old Ones been in conflict with one another, but were also warring with the Earthly deities that resided upon the planet. The war eventually ended with the deities imprisoning or slaying the remaining Great Ole Ones so as they would no longer pose a threat to the planet and poison its inhabitants. However, despite their destruction and imprisonment at the hands of the gods and angels, their spirits remained intact and hid between the borders of the physical and metaphysical, influencing the mortals that are particularly susceptible to their power into aiding them in restoring their physical bodies so as to reclaim the Earth once more.

Over time, some of the Great old Ones have begun to integrate themselves with the pantheons and hierarchies of other beings, accidentally creating beings such as Dagon, a Philistine fertility deity and Hastur, a Duke of Hell, fooling all the demons. Regardless, the Old Ones can contact humans through dreams and there are secret cults throughout the Earth. In the 1920's the Bureau for Paranormal Research and Defense was established to combat the Great Old Ones alongside their cults. 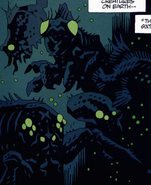 The Ogdru Hem (Art from Hellboy)

The Ogdru Hem wreaking havoc across the Earth (Art from Hellboy)

A Great Old One (Art by Josh Guglielmo)