The Olympians, The Underworld

Hades is the king and god of the Underworld (which his name became synonymous with) originating from the myths of ancient Greece along with being the God of the Dead, Riches and Wealth. Hades holds a key and scepter, which he uses to protect his kingdom and guard the dead from escaping.

Hades ruled the dead, assisted by others over whom he had complete authority. The House of Hades was described as full of "guests," though he rarely left the Underworld. He cared little about what happened in the world above, as his primary attention was ensuring none of his subjects ever left. Hades was often portrayed with his three-headed guard dog Cerberus.

Hades had a cap or helmet that made its wearer invisible. Hades took pride in collecting “subjects” for his kingdom and was disinclined to let anyone leave. He has many assistants and servants, among others are the judges who judge the human soul (Minos, Rhadamanthus, and Aiacos), Cerberus the guardian of the underworld, and the Moirai, who control over fate.

Hades is described by some sources as the god of the earth’s fertility. The narcissus and the cypress are sacred to him. In his kingdom, Hades sat on a throne made of ebony and carried a scepter.

Because of his status as the lord of the Underworld, Hades was greatly feared by the Greeks. So much so, that to merely utter his name would gain his attention, and even the Olympian gods would constantly be unnerved at the thought of Hades visiting their mountain when it came to matters concerning the balance. However, this means not that Hades is an evil deity, but in fact far from it. Hades was concerned with laws and order above almost all else and as such had a strong control over his temper with virtually no ego, especially compared to most of his siblings. Therefore, he is considered to be the most mature out of all his brothers and sisters. All Olympians were said to be unable to break a promises if sworn to it, but Hades was always honest, concerned mainly with remaining unbiased in light of the scope of his job.

Hades was also seen as the embodiment of wealth, as many believed the Underworld to locate deep within the Earth. Hades was previously referred to as Dis Pater, meaning Father of Gods.

Despite modern connotations of death as evil, Hades was actually more altruistically inclined in mythology. Hades was often portrayed as passive rather than evil; his role was often maintaining relative balance. That said, he was also depicted as cold and stern, and he held all of his subjects equally accountable to his laws.

He strictly forbade his subjects to leave his domain and would become quite enraged when anyone tried to leave, or if someone tried to steal the souls from his realm. His wrath was equally terrible for anyone who tried to cheat death or otherwise crossed him, as Sisyphus and Pirithous found out to their sorrow. While usually indifferent to his subjects, Hades was very focused on the punishment of these two people; particularly Pirithous, as he entered the underworld in an attempt to steal Persephone for himself, and consequently was forced onto the "Chair of Forgetfulness". The nymph Minthe, associated with the river Cocytus, loved by Hades, was turned into the mint plant, by a jealous Persephone.

Hades was the eldest son of Cronus and Rhea, although the last son regurgitated by his father. He and his brothers, Zeus and Poseidon, defeated their father's generation of gods, the Titans, and claimed rulership over the cosmos. Hades received the underworld, Zeus the sky, and Poseidon the sea, with the solid earth, long the province of Gaia, available to all three concurrently. The one-eyed giant, Cyclops, gave Hades the cap of invisibility to help in his battle with the Titans. The cap enables the one who wears it to become invisible to all other supernatural and mortal beings.

Following their victory, Hades and his two brothers, Poseidon and Zeus, drew lots for realms to rule. While Zeus and Poseidon ruled the sky and the sea territory respectively, he claimed the darkest place, located inside the earth, where the light of the sun is not allowed to shine, which is the realm of the dead; although he's not the god of death himself, as the role would be taken by Thanatos who serves him. Hades was dissatisfied with his turnout, but had no choice and moved to his new realm. Eventually, Zeus became the supreme god who ruled all of the earth and sky, while Poseidon married and stayed in the sea, and Hades happily remained in the underworld where he presided over the afterlife.

His duty subsequently made him often unable to leave his own world and therefore, he was not considered to be one of the Twelve Olympians, but is still referred as one of the principal gods. The only day, Hades was invited to Mount Olympus was during the Winter Solstice, which is the darkest day of the year, and when ancient and dark magic is at its strongest. Hades employed the Furies, who were responsible for torturing the guilty.

The King of the Gods, Zeus, had a daughter name Persephone. She was the daughter of his sister Demeter, the goddess in charge of the harvest. In consideration of her valuable domain, everyone, both gods and mortals, did all they could to keep Demeter happy. Persephone was a lovely and happy young woman. Hades fell in love with Persephone, daughter of Zeus and Demeter, and abducted her to live with him. He was enchanted with her beauty and felt compelled to have her, so he quickly kidnapped Persephone and took her to the underworld in his chariot before anyone could run interference. Turns out, this was all planned out by Zeus; Hades was permitted by the King of the Gods to kidnap and marry his daughter, why Zeus allowed this is unknown.

Disheartened at her fate, Persephone refused to speak to Hades, who had fallen madly in love with her, and also refused to eat. According to the legends, one who ate a meal in the underworld would seal their destiny and never be able to leave. Hoping for someone to come to her rescue, she held out as long as she could. Finally, after a week of crying and starving, she could no longer bear it, and ate six pomegranate seeds.

At this point, back on earth, Zeus was getting increasingly concerned about Demeter and the crops. Demeter was absolutely miserable and tearful about her missing daughter. Zeus decided to send his youngest son Hermes, the messenger, known for his excellent negotiating skills, to visit the underworld and try to make a deal with Hades.

Since Persephone had already eaten the pomegranate seeds, and Hades was hopelessly in love, Hermes needed to think quickly. After much discourse, Hades agreed that if Persephone married him she would live as queen of the underworld for six months of the year and in the spring she could return to earth for six months. Persephone also agreed to these terms, as did Hades.

Each spring, Demeter blooms all the flowers as a welcome to her beloved daughter returning from the underworld. In the autumn, when Persephone returns to Hades, Demeter cries and lets all the crops die until the following spring when the cycle begins again. And so, according to the legend, this is why they are seasons.

Hades was also called the Silent One, the Gloomy One, the Rich One and the Unseen One. Among the Ancient Greeks, Hades was known as “the Other Zeus.” Homer even calls him “The Infernal Zeus,” in addition to “the grisly God.” He was also called “the host of many” or “the Attractor of Man” – since all men eventually went to serve him. Due to his role as Lord of underworld and Ruler of the souls of the dead, he was also referred to as Zeus Katakhthonios (Zeus of the Underworld). According to Iliad, Hades’ dominion lies between secret places of the earth. According to the Odyssey, one must cross Ocean to get there.

As the Roman god Pluto

Pluto represents a more positive concept of the god who presides over the afterlife. Ploutōn was frequently conflated with Plutus, the Greek god of wealth, because mineral wealth was found underground, and because as a chthonic god Pluto ruled the deep earth that contained the seeds necessary for a bountiful harvest. The couple received souls in the afterlife and are invoked together in religious inscriptions, being referred to as Plouton and as Kore respectively. Hades, by contrast, had few temples and religious practices associated with him, and he is portrayed as the dark and violent abductor of Persephone.

Pluto is also symbolized by the pomegranate, the fruit of the underworld. Proserpina ate six seeds from the symbolic fruit and sealed her destiny. The hard outer shell of the pomegranate encapsulates a multitude of seeds representing fertility, prosperity and abundance. Each spring, when Proserpina emerges from the underworld and arrives on earth, she brings the seeds of fertility and the bloom of spring.

He was one of the most prominent old gods of the dead, whose kingdom was eventually overtaken by Satan and Lucifer, incorporating it into their massive infernal kingdom though Limbo. The demons Dispater and Mammon took his name in a form to both honor and insult him along with the Iron City of Dis being named after his underworld.

The dwarf planet Pluto is named after him. 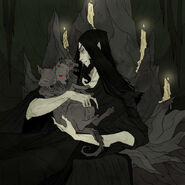 Hades in a human vessel (Art by Future Studio)

Hades and Persephone (Art by Zeldacw)

(Art from God of War)