Gods and Demons Wiki
Register
Don't have an account?
Sign In
Advertisement
in: Location, Abrahamic, Mythology,
and 3 more

Heaven, also known as Shamayim, is the Abrahamic Skyland created and ruled by God and a common religious, cosmological or transcendent place from which heavenly beings originate, are enthroned or inhabit.

It is an ageless, ethereal, holy realm created by God, intended to be the home-realm for both himself and his children, as well as a few selected pagan deities and supernatural beings.

It is commonly believed that heavenly beings can descend to earth or incarnate and that earthly beings can ascend to Heaven in the afterlife or, in exceptional cases, enter Heaven alive. God created His Heaven as a realm for Him to rule alongside his faithful messengers, the angels. Soon after the creation of the humans, Heaven became the final resting place for the pure and virtuous humans after death. Heaven is the opposite realm for Hell.

Heaven is often described as a "higher place", the holiest place, a Paradise, in contrast to Hell or the Underworld or the "low places", and universally or conditionally accessible by earthly beings according to various standards of divinity, goodness, piety, faith, or other virtues or right beliefs or simply the Will of God. Some believe in the possibility of a Heaven on Earth in a World to Come. The center of Heaven is the Garden of Eden, and it is said that it can only be reached via the Axis Mundi, which is often seen as a river or road depending on the person.

Heaven is divided into dimensional layers with each layer transcending the other at the dimensional level. In a dream, Jacob sees angels ascending and descending a ladder that started in Heaven and ended on Earth, Kabbalists interpret this dream of Jacob as the angels traversing the different levels of existence, from the highest to the lowest. There are about seven heavens (perfect number) that make up a single structure known as "Heaven of Heaven" or "Pleroma", each layer of the Heaven is infinitely large in size.

Heaven is described primarily in physical terms as a place where every wish is immediately fulfilled when asked to those whom are deemed worthy of entering. It is even stated in various texts that immortal life in Heaven as happy, without negative emotions. Those who dwell in Heaven are said to wear costly apparel, partake in exquisite banquets, and recline on couches inlaid with gold or precious stones. Inhabitants will rejoice in the company of their parents, spouses, and children.

In order to be worthy to enter Paradise, one's good deeds must weigh out one's sins, and only then one may gain entrance to Heaven. Conversely, if one's sins outweigh their good deeds they are sent to Hell. The more good deeds one has performed the higher the level of Heaven one is directed to. It has been said that the lowest level of Heaven, the first one, is already over one-hundred times better than the greatest life on Earth. The highest level is the seventh Heaven. Houses are built by angels for the occupants using solid gold. The angels would even aid in altering the soul's desired wish if the soul wishes it to be.

There is absolutely no crime, evil, sin, or temptation whatsoever in Heaven as it is completely devoid of any negativity. Many demons fear the inhabitants of Heaven, more specifically God and his angels and will flee from them on sight. A demon stated that for them to raid Heaven would be complete madness and suicide, and even went as far as to say that the demons are not that depraved. Only the most powerful inhabitants of the Inferno could raid Heaven if they possessed the power to do so. However, entities such as Lucifer and Satan can enter Heaven as they were once inhabitants within Paradise.

Pearly gates is an informal name for the gateway to Heaven. They are white or wrought-iron gates in the clouds, guarded by a judge, believed by some Christians to be Saint Peter (the keeper of the "keys to the kingdom"). Those not fit to enter heaven are denied entrance at the gates, and descend into Hell. In some versions of this imagery, Peter looks up the deceased's name in a book, before opening the gate.

Governed by Archangel Gabriel, Vilon is the first Heaven and the closest dimensional layer to the Human Realm, it is a fifth dimensional realm full of incredible wonders and beautiful beings. It is here where the angels observe the movements of the stars like planets and stars and the great galaxies, observing if the Universe is in order and in harmony.

Dually controlled by Zachariel and Raphael, Raki'a is the second Heaven and a six-dimensional realm. It's a world as beautiful as the last, it's here where the souls of people who haven't paid for all their sins in life are judged by the angels to decide whether to go to the third heaven or hell. It sometimes get confused with Purgatory.

Shehaqim, under the leadership of Anahel, is the third Heaven, formed by three dimensions greater than the four of the universe, a colossal, beautiful garden made from Enochian Brass and radiates a white-gold aura of light and holiness. Several floating islands could be seen in the distance, serving as the residences of famous holy people along with Zebul. It is in the third heaven where the Savior rests with the other saints and angels. Azrael, the Archangel of Death can be found here. He and his subordinates, colloquially known as the Angels of Death, are responsible for separating the soul from the body of the dead and will lead virtuous to heaven and sinners to hell.

The fourth heaven is ruled by the Archangel Michael, and according to Talmud Hagiga 12, it contains the heavenly Jerusalem, the Temple, and the Altar.

The Fourth Heaven is filled with fortresses, castles and ramparts, with some cherubim living here.

The Prophet Enoch is resident here, sometimes the archangel Cassiel, the "Angel of Tears", can be also found here.

The Fifth Heaven was once under the command of Samael, who is no longer occupying this realm as he now lives in Hell. This place is where the Song-Uttering Choirs reside and sing throughout the Seven Heavens.

Fifth Heaven is filled with angelic cities, built by djinns and administered by seraphim, with glittering cathedrals, towering towers and beautiful palaces. For a long time it was considered the capital of angels.

Aaron, the elder brother of Moses, is resident here. Maalik, the angel guardian of Hell, responsible for fighting the demonic forces and preventing demons and sinners from leaving Hell, can sometimes be found here. Maalik never smile.

The sixth heaven falls under the jurisdiction of Sachiel. The Prophet Moses is resident here.

Araboth, under the leadership of Cassiel, is the seventh Heaven (sometimes believed to be the third) and a nine dimensional realm where the ophanim, cherubim, seraphim, and the hayyoth are located. This is the holiest of the seven heavens because it houses the Throne of God attended by the Seven Archangels. The Throne of God is surrounded by four cherubim who guard the throne and is surrounded by several seraphim; Underneath the throne itself lies the abode of all unborn human souls.

Empyrean, also known as the Empyrean Heaven, is the said to be the highest transcended realm in the spheres of Heaven itself, and is the abode of God Himself. It is the highest transcended place of Heaven and is the or the dwelling-place of God, the blessed, celestial beings so divine they are made of pure light, and the source of light and creation.

The first Archangels themselves once dwelled within such a place, and only five known archangels have been there and personally seen God. Those five being the first true archangels; Lucifer, Michael, Gabriel, Raphael and Uriel. Metatron is known to have also witnessed God in His abode.

To properly describe the Empyrean is said by many to be utterly impossible in human words. However, according to a certain prophet of God, who was fit and worthy enough to enter the Empyrean and even witness God, he describes witnessing an enormous rose, symbolizing divine love, the petals of which are the enthroned souls of the faithful. Angels fly around the rose like bees, distributing peace and love. 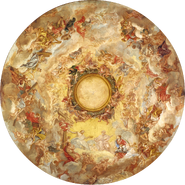