Gods and Demons Wiki
Register
Don't have an account?
Sign In
Advertisement
in: Articles that need art credits, Beings, Spirit,
and 17 more

Virgin Mary (through the light)

The Holy Spirit is the third member of the Holy Trinity. He is a personage of spirit, without a body of flesh and bones. He is also became the second spirit to preside in Excalibur.

He is often referred to as the Spirit, the Holy Ghost, the Spirit of God, the Spirit of the Lord, or the Comforter. Many believe that the Holy Spirit could even be God Himself, taking the form of a dove made of pure white light.

The Holy Ghost works in perfect unity with God and Jesus Christ, fulfilling several roles to help the humans live righteously and receive the blessings of the gospel. He “witnesses of the Father and the Son" and reveals and teaches “the truth of all things”. Christians believe that they can receive a sure testimony of God and Jesus only by the power of the Holy Ghost. His communication to their spirit carries far more certainty than any communication they can receive through our natural senses.

All honest seekers of the truth can feel the influence of the Holy Spirit, leading them to Jesus Christ and his gospel. However, the fullness of the blessings given through the Holy Ghost are available only to those who receive the gift of the Holy Ghost and remain worthy.

Being an Avatar of God, existing since the First Day of Creation (some say even before), the Holy Spirit has characteristics inexplicable to human beings, generally being perceived as a powerful omnipresent light crossing the different levels of creation. Similar to God the Father, describe His manifestations as a mighty wind with a powerful voice capable of breaking windows. During 27 or 30 CE, he manifested himself at Christ's baptism as a white dove.

The Holy Spirit is also known as the Comforter. This due to the Holy Ghost acting as the soothing voice of a loving parent which can quiet a crying child, the whispering of the Spirit is said to calm even the deepest fears, hush the nagging worries of one's life, and comfort someone when they grieve. The Holy Spirit can fill one “with hope and perfect love” and “teach the peaceable things of the kingdom”.

During the year 6 or 5 BCE, angel Gabriel announced the birth of the Holy Child, Jesus Christ, who would save humanity from the clutches of the Devil. After the annunciation, the Messenger took clay from sacred ground and the Holy Spirit placed His divine light within that earth, generating a seed that was later placed within the Virgin Mary by the Holy Spirit through His divine Light. This seed was to develop within Mary's womb and develop into the perfect vessel of God the Son. Finally, in the year 4 BCE, the Enlightened One was born within his vessel, generated by the Holy Spirit and Holy Mary.

The New Testament details a close relationship between the Holy Spirit and Jesus during his earthly life and ministry.The Gospels of Matthew and Luke and the Nicene Creed state that Jesus was "conceived by the Holy Spirit, born of the Virgin Mary". The Holy Spirit descended on Jesus like a dove during his baptism, and in his Farewell Discourse after the Last Supper Jesus promised to send the Holy Spirit to his disciples after his departure.

What the Bible generally calls "Spirit of God" is called in the Talmud and Midrash "Holy Spirit" due to the disinclination to the use of the Tetragrammaton. It is probably owing to this fact that the Shekhinah is often referred to instead of the Holy Spirit. It is said of the former, as of the Holy Spirit, that it rests upon a person. The difference between the two in such cases has not yet been determined.

Although the Holy Spirit is often named instead of God, it was conceived as being something distinct. The Spirit was among the ten things that were created on the first day. Though the nature of the Holy Spirit is really nowhere described, the name indicates that it was conceived as a kind of wind that became manifest through noise and light. As early as Ezekiel 3:12 it is stated, "the spirit took me up, and I heard behind me a voice of a great rushing," the expression "behind me" characterizing the unusual nature of the noise. The Shekhinah made a noise before Samson like a bell. When the Holy Spirit was resting upon him, his hair gave forth a sound like a bell, which could be heard from afar. It imbued him with such strength that he could uproot two mountains and rub them together like pebbles, and could cover leagues at one step.

Although the lights which accompanied the noise are not expressly mentioned, the frequently recurring phrase "he beheld (hetzitz be-) the Holy Spirit" suggests that he upon whom the spirit rested saw a light. The Holy Spirit gleamed in the court of Shem, of Samuel, and of King Solomon. It "glimmered" in Tamar (Genesis 38:18), in the sons of Jacob (Genesis 42:11), and in Moses (Exodus 2:12), i.e., it settled upon these individuals. Like everything that comes from heaven, the Holy Spirit is described as being composed of light and fire. When it rested upon Pinchas, his face burned like a torch.

The phrase rūḥ al-qudus, commonly translated as the "holy spirit" or the "spirit of holiness", occurs four times in the Quran, in Quran 2:87 and 253, Al-Ma'idah verse 110, and An-Nahl verse 102. In three instances, it is described as the means by which God "strengthened" Jesus, and in the fourth it is identified as the one brought down God's truth to his prophet.

Some Muslim commentators connected this expression with the "faithful/trustworthy spirit" (al-ruh al-amin) who is said to have brought down the Quran in verse 26:193, and identified with Gabriel.

Other Muslim commentators viewed it as identical with the created spirit described in other Quranic verses as the means by which God brought Adam to life (e.g., 15:29), made Mary conceive Jesus 21:91 and inspired angels and prophets (e.g., 17:85). The spirit who together with "the angels" descends and ascends to God (16:2, 70:4, 97:4) was also identified with Gabriel in Quranic commentaries. Thus, the figure of Gabriel became a focus of theological reflection on the content of revelation and the nature of cognition itself, with distinctions articulated between reason, prophetic revelation, and mystical knowledge.

The term Rūḥ al-Qudus is also an epithet referring to the Archangel Gabriel, who is related as the Angel of revelation and was assigned by God to reveal the Qurʼan to the prophet Muhammad and who delivered the Annunciation to Mary.

In the two suras in which the Qur'an refers to the angel Gabriel, it does so by name. However, some ahadith and parts of the Qurʼan may arguably lend support to the alternative view.

It appears to be indicated by the Quran in sura Maryam, ayat 16–21, that it was the angel Gabriel who gave to Mary the tidings that she was to have a son as a virgin: "She chose to seclude herself (from her people); then we sent to her Our Spirit, and he appeared before her in the form of a man in all respects. She said: "Verily! I seek refuge with the Most Beneficent (God) from you, if you do fear God." (The man) said: "I am only a messenger from your Lord, (to announce) to you the gift of a righteous son." She said: "How can I have a son, when no man has touched me, nor am I unchaste?" He said: "So (it will be), your Lord said: 'That is easy for me (God): And (we wish) to appoint him as a sign to mankind and a mercy from us (God), and it is a matter (already) decreed (by God).' " [Quran 19:17]."

It is narrated in hadith that the angel Gabriel accompanied Muhammad during the Mi'raj, an ascension to the heavens in which Muhammad is said to have met other messengers of God and was instructed about the manner of Islamic prayer (sujud). (Bukhari Sahih al-Bukhari, 1:8:345.) It is also held by Muslims that the angel Gabriel descends to Earth on the night of Laylat al-Qadr, a night in the last ten days of the holy month of Ramadan, which is said to be the night on which the Qurʼan was first revealed. 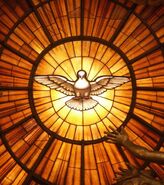 Depiction of the Christian Holy Spirit as a dove, by Gian Lorenzo Bernini, in the apse of Saint Peter's Basilica