Gods and Demons Wiki
Register
Don't have an account?
Sign In
Advertisement
in: Beings, Angel, Archangel,
and 2 more

Israfel, Esrafil, Rafā'īl, Angel of Trumpet, Angel of Song, Shadow of Perfect Bliss, He who blows the horn at the end of days

Israfil is an Archangel from Islamic theology, who is said to be the angel to blow the trumpet during the Days of Judgement.

Israfil is the angel of the trumpet in Islam, though unnamed in the Qur'an. Along with Mikhail, Djibril and Izra'il, he is one of the four Islamic archangels. The "Book of Dead" described Israfil as the oldest of all archangels. In Islamic tradition, he is said to have been sent, along with the other three Islamic archangels, to collect dust from the four corners of the earth, although only Izra'il succeeded in this mission. It was from this dust that Adam was formed.

Certain sources indicate that, created at the beginning of time, Israfil possesses four wings, and is so tall as to be able to reach from the earth to the pillars of Heaven. A beautiful angel who is a master of music, Israfil sings praises to God in a thousand different languages, the breath of which is used to inject life into hosts of angels who add to the songs themselves. Due to his beautiful voice, he is also the Muezzin of those in Heaven.

Israfil holds his holy trumpet to his lips century after century, awaiting the signal from God to sound it at the Last Judgement. At this time, he will descend to Earth and stand upon the holy rock in Jerusalem. The first blow of his trumpet will shatter the world, and the second blow will awaken the dead and summon them to judgement.

According to Sunni traditions reported by Imam Al-Suyuti, the 'Ghawth or Qutb, is someone who has a heart that resembles that of archangel Israfil, signifying the loftiness of this angel. The next in rank are the saints who are known as the Umdah or Awtad, amongst whom the highest ones have their hearts resembling that of angel Michael, and the rest of the lower ranking saints having the heart of Gabriel, and that of the previous prophets before Muhammad. The earth is believed to always have one of the Qutb.

Although the name "Israfel" does not appear in the Qur'an, mention is repeatedly made of an unnamed trumpet-angel assumed to identify this figure: 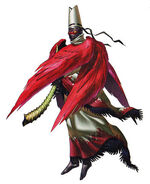 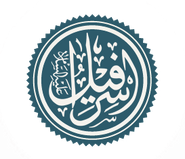 Israfil in Islamic calligraphy (Art by ???)